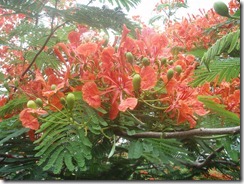 The other morning – at 5:00 AM, actually – I was awakened by the sound of a diesel engine very close to La Luna. I scrambled out of bed and popped up on deck to see a bare-boat charter anchoring about 30 feet to port of us. That is too close. It was a dark and stormy morning and as the wind blew them even closer to La Luna,  called EW out of bed to stand by with me. We don’t know whether they had been anchored elsewhere in the bay and dragged or whether they had just come in from what would have been a stormy night passage, but we did know two things: 1) they weren’t great at anchoring and 2) they were too damn close. We didn’t call out to them, but stood on silent watch in the cockpit as they decided to pull their anchor. How close were they? Somehow their anchor had set just a bit out from our bow, and their dinghy brushed against La Luna as they hauled the anchor up Definitely too damn close!  We watched as they moved well off and tried to anchor again, facing away from the wind. That is definitely not a good anchoring technique. They later left that spot as well and we aren’t sure where they ended up in the bay. I never got back to sleep, so was a tad grumpy, but realized that I would not be able to call a friend and vent because anything we say on the radio can be heard by other boaters. There was no reason to embarrass those boaters by telling their tale over the radio for the whole anchorage to hear. Since we have no cell phone active in St. Lucia, the VHF and SSB are my only voice options and this got me thinking about the differences between marine radios and cell phones. 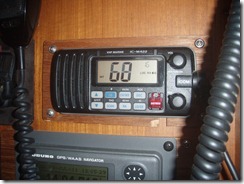 At right is our SSB. We are listening to the Coconut Net this morning to find out where other cruisers are and what they’re up to. 4060 at 8:00 AM.

For now, I have to go. The marina has offered a free breakfast to cruisers. We heard about it on the radio. Happy 4th all!