Where Will You Spend Hurricane Season? 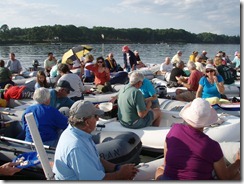 At the SSCA Gam in August, we asked cruisers about where they spent hurricane season.

This is a dinghy cocktail hour, by the way. Yep. It’s just what it sounds like.

Where will you spend hurricane season? This is the question of the moment. Our friends and family ask when we talk or email, other cruisers ask us when we meet and we ask them. If we find out they’ve done this cruising the Caribbean thing for a while, we ask where they’ve gone during past years and pick their brains as much as possible.

Frankly, I thought they were insane. But, they are normal and I just didn’t know it. I didn’t know a lot of things then – still don’t but I’m learning. Shortly after that conversation in Hampton (I think it was probably after the storm at Cape Fear), I informed EW that I had no interest in taking the boat back and forth. “This is a delivery and I’m not having that much fun. Cruising is supposed to be fun. I have no desire to deliver La Luna two times a year.”

We are in the minority and now I understand that those folks who go back and forth every year aren’t insane, or at least not any more than we are. They just have different expectations than we do, and they may be on to something. If you go back and forth every year you get to see friends and family more, you have a chance to get boat work done at home, some people find a way to balance work with semi-retirement that way and others get to spend a lot of time with their grandkids. Other people – again, a surprising number to me – leave their boat down here and fly back home to Maine or Colorado, or England. That works for them, and they get to start next season in warm waters. The majority of cruisers come down for the winter and head back home’ aboard their boat or aboard a plane, for hurricane season.

Until recently, when asked,  “Where will you spend hurricane season?” we’d answer,  “We’re working on that, what do you suggest?” And we’d get advice, lots and lots of advice. As a result we’ve looked at many options such as: Buenos Aries, Venezuela, Cartagena, Grenada, Trinidad, and Luperon; and we heard about even more including the Med, San Blas Islands, and Puerto Rico.

One of the limiting factors is our boating insurance. Most US companies won’t let folks stay in Grenada anymore, since they had two hurricanes in two years. Canadian and European sailors have no problems going to Grenada, and EW and I recently found out that we could have been insured there as well if we’d understood the system. Our insurance company will allow a certain number of boats to stay “within” the hurricane zone for a relatively small rider. The catch is, you have to secure that rider before they hit their quota of boats. We did not realize that was an option in Grenada until they had filled the quota. We also now understand two things about hurricanes: 1. There is no hurricane free zone from Maine to Venezuela.  and 2. There is no such thing as a “hurricane hole”. We are responsible for watching the weather and for making sure out boat and persons are safe.

At various points during the past eight months here are the locations we considered for “Hurricane Season”:

Buenos Aries: This is on EW’s bucket list and in the excitement of leaving it looked doable. We even got shots and medical information based on heading that far south. As we began to meet other cruisers and as I began to understand the difficulties of going against the prevailing winds and currents, heading to Buenos Aries from here became more and more unappealing. We’ll get there, but not from the Caribbean.

Venezuela: We first began to discuss Venezuela in Nassau, when we met a couple who had been sailing for over 20 years.  They had spent the first five years enjoying the Caribbean by spending the summer in Venezuela and sailing the islands from November through June. We loved what they had to say and began to talk with others who had spent time there. We got a lot of information in Georgetown when we met a couple from the Netherlands who had swallowed the hook and started a business in a bay in Venezuela. They made it sound enticing and discussed the services they provide for cruisers. Then they mentioned that they were heading back to Europe for the summer and wouldn’t be there. Seems the political situation has greatly hurt their business so they go back to the Netherlands to earn money. Shortly after that we met other cruisers who were heading North after 10 years in the Caribbean. They spent time in Venezuela during the first few year but no longer find it safe. The phrase that stuck in my mind was: “There is no rule of law there. Chavez thinks that since cruisers have more money than his people, they are therefore fair targets.” OK. We’ll take a pass on Venezuela.

Luperon: This is a “sticky” harbor. Boaters either love it or hate it and if they love it many of them never leave. We met wonderful folks there, and the geography does provide a certain amount of protection from hurricanes, but if you stay there for the season, there is no place to sail. It’s a safe harbor and you can certainly leave the boat to tour the DR, and escape to the mountains during the heat, but this is not what we envisioned when we left Maine.

Cartagena: Another port on EW’s bucket list. We focused on Cartagena for many weeks, to the point that friends were planning to visit us there. It is actually out of the hurricane zone as much as any place can be at these latitudes. There are interesting islands nearby for our sailing pleasure, and an historic old city to explore. The rest of Columbia is off limits due to crime, but Cartagena is relatively safe and they are building a good reputation for cruisers. The problem is that it would take eight to ten days to sail there and we’d want to go directly to avoid the coast of Venezuela. We could sail directly to New England in almost the same amount of time. Getting to and from Cartagena is another delivery, particularly as we still have a lot to see in the Eastern Caribbean. Cartagena is high on the list, but not this year.

Trinidad: For US Insurance companies, Trinidad is the new Grenada. They haven’t had a hurricane in recent history, so we don’t need a rider to go there. We talked with a lot of people about Trinidad. As near as we can tell, we’d have to get a mooring (if one were still available) or dock space. The harbor is very deep and not good holding for anchoring. It is also a muddy harbor, not attractive at all. We could sail to other islands from there, and we’d be insured. One of our Maine friends put us in touch with other Mainers who “Love Trinidad”, and EW exchanged a couple of emails with them. It turned out that these folks haul the boat there and head back to Maine. They’ve sailed around Trinidad and love it for a visit but would not spend the season in the water there. Enough said.

And that brings us to, drum roll, please …. Grenada.

Yep, we’ll spend hurricane season in Grenada. Our insurance will cover us for anything except damaged due to a named storm and we will watch the weather daily and sail south if a named storm looks like it may approach. I have declared that I’m OK with sailing south in times of question, no questions asked and will not complain if we take off for one or more storms that end up not touching Grenada. It would only take 12 hours to sail to Trinidad, or we may just head out to sea away from the storm. We’re playing the averages a bit here as until Hurricane Ivan and Tropical Storm Earl in 2004, followed by Emily in 2005, Grenada hadn’t suffered a major hurricane since Janet in 1955.  In doing so we understand that Global Warming and other factors have impacted hurricane season and we cannot be assured that no storms will touch Grenada.  In any of the above locations we would have to watch the weather and be prepared to move the boat. The only difference is that our insurance would cover us for a loss. We don’t want to have a loss of that nature as no amount of insurance (and this is a good policy) would replace our beloved La Luna.

On the plus side, Grenada is a great country for cruisers, in good weather we can sail to other parts of the island or to the Tobago Cays and Carriacou which sound beautiful. While this is considered the “off season” in terms of cruisers and tourists, the locals have many events, including regattas during July and August, so there will be much to do. We’re going to volunteer at a local reading program that is sponsored by Hands Across the Sea, work on the boat, write, and (hopefully) host at least a couple of dear friends. There are waterfalls, marine supply stores, and excellent wifi at anchor. Traditionally, this has been “the” cruisers’ harbor for hurricane season. It will be our harbor this year, and we are happy with the decision.

today it feels like 102 degrees in Grenada !
where is your location ?

good to see your still floating and smiling