Our First Caribbean Waterfall–Sort of 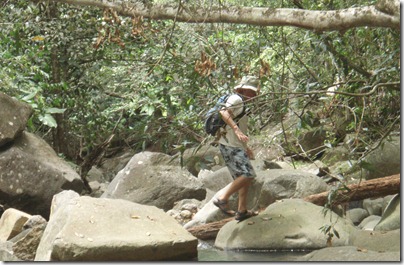 Since visiting Luperon, we’ve heard of inland waterfalls throughout the Caribbean and have been anxious to have the time/weather/opportunity to visit one. Nearly all of the “Islands of Mountains and Mangroves” as Chris Doyle has labeled this group in his Cruising Guide to the Leeward Islands, and most of  the Windward Islands have glorious water falls in a luscious rain forest setting. We plan to visit quite a few during the next several months. Our first was encountered on an afternoon hike in Deshaies.

Chris Doyle: “ Anyone ready for a cool, shady scramble should follow the Deshaies River as it winds its way into the mountains. A concrete road leads back a short way and after that you follow the river from rock to rock passing many a pretty pool. Continue for one to two hours and you come to another road that joins the river on the left hand side and which will bring you back down to town in about 15 minutes. However, don’t return yet. Carry on up the river for another 20 minutes and you arrive as far as you can go without a detour. Your path is stopped as the river comes out of a giant cave-like gully, with a waterfall at the back of it.”

After a morning doing chores and getting on-line, we packed a lunch and our shampoo, donned our swimsuits 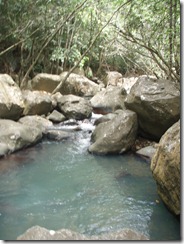 and headed up the river. It was a hot, sunny day and the cool river walk sounded wonderful. EW is a natural hiker and steps or leaps nimbly from rock to rock. I’ve always loved climbing around on rocks but am a bit more cautious about stepping or leaping from one small rock to a smaller one mid-stream. I mostly followed his lead, but would sometimes clamber over the larger boulders close to shore rather than make leaps across the chasms. Along the way we passed a number of beautiful and inviting pools, which are shown at the right, in order of their appearance. 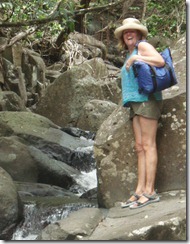 We never did find where the road meets the river and believe now we didn’t go high enough though we scrambled up river for over ninety minutes. We’ve found that we walk pretty fast and most of the “walk x to y minutes” directions in the cruising guides are conservative in the length of time it takes. Evidently Chris Doyle walks faster than we do. It was nearing 1:30 when we decided that “this must be it”, though frankly we’d forgotten Chris’ description of the “giant cave-like gully” and now know we didn’t travel far enough. We did find a wonderfully inviting deep pool beneath a small waterfall, perfect for rinsing our hair. with a flat rock  above the falls that would be perfect for our picnic. Then it began to rain a bit. EW loathes eating soggy bread and did not want me to unpack lunch in the rain, so 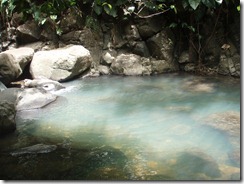 we decided to get in the pool. We washed our hair, floated, had a splashing fight, and the rain continued, and increased. EW looked at me and deadpanned, “This is torrential.” It actually was painful to float on our backs and have the rain smash into our faces. 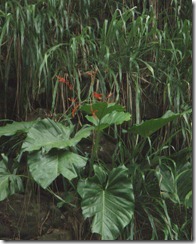 After an hour of this, it was apparent that the rain would continue for a while and we had to get back down a now very slippery slope. We’d heard cars near the river at one point on the way up, and I had “marked” the location in my mind in case we wanted to head for the road at that point. EW began to blaze a trail through the trees in an attempt to keep us from slipping on wet river rocks. Unfortunately, loosened by the rain, a rock slipped out from under him and dislodged a boulder which bounced off of EW’s right foot on the way to splashing in the river. it didn’t break the skin, but it was painful. Now I was determined to 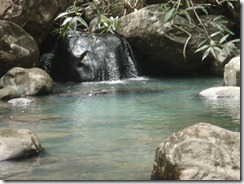 find the road, so we crossed the river by wading through the stream (I led the way to note safe points for the limping EW) and I headed up away from the river to an open field we could see in the sunshine. Yes, the rain had stopped about fifteen minutes after we left the pool.

Up in the meadow, I saw a more open area to the west and determined it was a farm. A farm must be near a road, so I called to EW to make his way up the hill. We crossed the first field and came to a barbed wire fence, and walked along side it until EW found a loose strand. He held it for me, passed me the bags and I held it for him and we were clearly in a field for cattle. Clearly. You figure it out. Looking around for the obligatory bull, we scrambled up the hilly pasture to the road and discovered that if we had just continued along the fence we’d be on the road by now. Instead we had to find a way to exit the 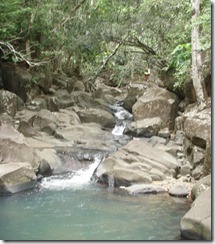 pasture without harming the fence -- before the bull found us. That done, we trekked (well I trekked, EW limped) back down to Deshaies, past a convent or monastery with outdoor stations of the cross. There aren’t any good photos post rain 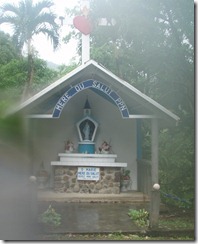 storm as my camera got wet and needed to dry out. It’s waterproof to 10 feet, but got a bit steamy as you can see by this photo of a roadside shrine.

There were cattle in the field, including one steer, but they were tethered on the western end.

EW rested with ice for a couple of days and is just fine. We both were delighted with our scramble up the river and intend to do more and see larger waterfalls. We want to get this right and practice makes perfect.