View of Pigeon Island off our first anchorage. 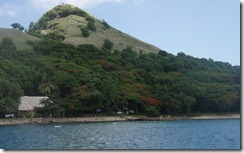 I’ve had three cups of coffee this morning. For over a year, I’ve had tea in the mornings, with an occasional coup of coffee when dining out. We have been On-the-Hard for 6 days and haven’t been sleeping well on a motionless boat. As is evidenced by the typo above, coffee was required.

We had an excellent sail from Isles des Saintes to St. Lucia, but couldn’t get the wireless to work for a few days. EW had work to do on-line so my computer time was relegated to un-installing and re-installing the wireless program --- 6 times. Imagine my delight when I finally checked the hardware and found that I had re-assembled it incorrectly and the antenna had become unplugged inside the waterproof housing. Wasted days and wasted nights.

This has to be quick as I need to put the second coat of paint on the boot-stripe. The haul out at Rodney Bay Marina in St. Lucia is largely going very well and we are extremely happy with the crew. It’s all good. There have been frustrating moments and funny moments. Just so you know what’s going on, here’s a quick synopsis:

Sunday, June 12 we arrived in Rodney Bay after a 30 hour sail. EW checked us in on Monday, which is a holiday here, Whit Monday. None of the locals we spoke to knew why there was a holiday, they just knew that most of them had the day off. EW and I had a wonderful dinner ashore at the local restaurant in the national park on Pigeon Island. 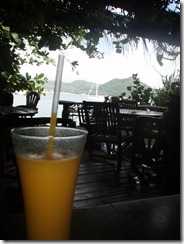 Tuesday, June 14, we got in contact with Edwin from Rodney Bay and arranged to have La Luna hauled on Wednesday at 2:00 PM. In the meantime, I went back to the restaurant on Pigeon to try to fix the Wi-Fi, while EW stayed on the boat and babysat Jenny the Honda Generator. When I failed to find the problem, EW went to the restaurant and used their Wi-Fi to get some work done while Jenny and I topped the batteries. EW had a much more exciting shift on La Luna than I did. From my comfortable nook overlooking the deck of the restaurant, I watched first as a squall moved through and then as a police/coast guard boat came alongside and boarded La Luna. They asked EW all sorts of questions, including asking him the color of my eyes as they held my passport. Tricky. He passed.

Wednesday, the 15th was blustery and we had problems backing La Luna into the slipway for the travel lift. We had to go in backwards or would have had to remove the forestay. The marina’s able crew, led by the extremely knowledgeable Ricky, hauled La Luna and left her in the sling for the night. They also put up jack stands so we wouldn’t sway in the wind. We had been invited aboard Molly Bloom for dinner and were happy to visit a floating boat. While on the hard, I can’t use any sink (or the head, of course). The boatyard has good, clean restrooms and showers and I’ve learned to do dishes by putting all wash and rinse water in a slop bucket for removal. Needless to say, there will be no multi-course meals prepared while on board.

Thursday, I toured all of the hardware and marine stores on this side of the harbor, looking for some items I need to do my haul-out projects, with no success. EW got on line in a café, I had little time to do so, and worked on the Wi-Fi when I was on-line. Thursday was a wasted, frustrating day.

This is getting whiny. I’m not often whiney. So make this more positive, here’s what I’ve accomplished so far:

Here’s what I have to do: 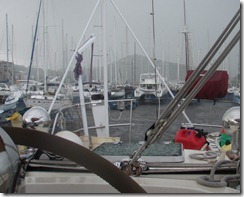 EW and the yard have their own projects, all of which have been hampered by showers every day. With luck we’ll be back in the water later this week. Since there have been a few low fronts going through and a couple more to come later in the week, I expect that we’ll stay at anchor in Rodney Bay for another week – and I”m hopeful that we’ll be able to play the tourist some.

This has actually been the easiest time I’ve had living on the hard for a number of reasons:

I’ve got to apply sunscreen, put a load of laundry in the bucket, and get down below to sand and paint. This is all part of the cruising life in Paradise. It’s a good life.