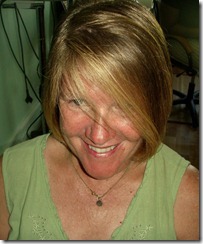 I got another haircut!  Yippee!

Really, this is big – who knew getting a good haircut would cause such angst?

Before we left, EW was going to grow his hair out to have a pony tail and I envisioned being married to a “Silver Fox” and running my fingers through his glorious wavy mane. (How’s that for a visual mixed metaphor?) By the Bahamas, we both realized that EW’s waves straightened out as they lengthened and that the long locks were driving him crazy – particularly when he snorkeled. So, I’m now cutting his hair and thankfully EW has no “hair ego” and doesn’t look in a mirror often. I know what I want to achieve but have no idea how to make it happen.  I have kept the back longer than his stylist did, and that does give me silky waves to caress.

As for me, EW refuses to cut my hair, even after I absolved him from all blame, pre-cut. I have very straight, fine hair and have had a lot of bad cuts in my time – one provided by my mother when I was six or so. She evened up the bangs so much that they stuck up straight when she was done – but they were even there was no denying that. To catch you up, after years of getting my hair cut by Darlene every four weeks in Portland, ’ve had my hair cut three times since September 2010: 1) Jacksonville in November, 2) Luperon in February, and 3) here in St. Lucia last week.

I made the appointment with Debra, the owner of Soothing Touch Massage Spa at Rodney Bay, and she called Vanessa, the hair stylist to confirm the day and time. Vanessa also works at a salon in Castries, 11 kilometers from Rodney Bay and has to take a bus to cut hair at the Soothing Touch. As we got acquainted,  I showed them the photo of my Luperon hair cut and they both said, “You want a Rihanna.”

My first thought was, “Really, I want a Rihanna? I don’t think so!”  Not wanting to insult someone’s potential heroine, I quickly thought back to any Rihanna hair style I could remember from glancing through People Magazine in various waiting rooms.While I vaguely recalled a style somewhat like the cut I got from Anna in Luperon, I also know that Rihanna has had a lot of different hairstyles. She’s young, beautiful and probably has a stylist at her fingertips. I am fifty-something, and live on a boat. Style isn’t one of my priorities, but I don’t want to look ridiculous. (EW knows that and hence, refuses to cut my hair.)  But I had shown Debra and Vanessa the photo and they seemed like nice women, so I sucked it up and said, “Yes, I want a Rihanna,” fingers crossed and knowing that the cut would probably be shorter than other previous cuts. Vanessa wet my hair, got out some clips and began to carefully lop off 2 inches and more of hair.  I hoped to get the Rihanna below right,

not any of these Rihannas:

(If you want to know more about Rihanna’s styles, you can vote on your favorites at Elle.com. Who knew? That is where I found these photos.)

We had been joined by a woman who was in the area for a job interview. I don’t think either of them knew her, 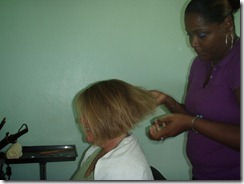 she just wanted a cool place to wait for her appointment and she also enjoyed participating in my haircut. “She wants a Rihanna," said Vanessa. “Oh, yes,” said the other lady. “Not the new Rihanna,” Vanessa clarified with disdain for the star’s newer style. The three of them agreed that the fake red color was not attractive and they didn’t like the shorter spiky styles they’d recently seen sported by the singer. Internally, I breathed a sigh of relief. I was getting the “good Rihanna” cut. Whew.

We had a great time conversing about babies (Vanessa has a 2 year old daughter) weight loss, and renovations (Debra is going to remodel her two room salon/office) and food (I love learning about the local foods). By the time Vanessa had finished the cut, there was a lot of hair on the floor.  and we three were better acquainted. 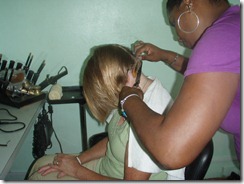 After the cut, Vanessa had Debra heat up the irons.  I have very straight hair.  I have never ironed my hair and I suspected that I would pay more for a cut and style than I would just for a cut. Still, Vanessa had taken a 20 minute bus ride just to cut my hair. I sat still. She applied product to my short “Old Rihanna” cut and used an iron to curl the back under. I heard sizzling and only barely managed not to twitch with the hot iron millimeters from my exposed neck.

“What makes it sizzle?” I asked.

“That’s the wax I put on your hair to protect it,” said Vanessa. “You didn’t think I was burning your hair did you?” 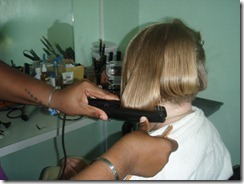 “No, I’ve burned my hair before and know what it smells like. I don’t smell burning hair.”

All three women laughed. One related that a certain local woman had burned her hair in church. “So did I,” I said. “With a candle at a rehearsal for a Christmas pageant.” They all laughed at that visual, and Vanessa kept heating up and applying the irons. My hair looked great. I asked Debra to take some photos for the blog and Vanessa asked whether she could take photos for her Facebook page. I readily agreed.

It’s a good haircut. I don’t have to use hot irons to style it as the back curls under just as it should. Whew. I do have to remember to apply sun screen to my exposed neck.

Oh, and EW likes it.

You look beautiful--love the cut!

I can tell she is doing a great cut from the photos. It looks so nice,Thanks for sharing this adventure Barb
That cut looks like it will grow out nicely and last. :)

Love the cut! Thanks for writing about how we all feel going to a new place. See you soon??

Great to hear from you and thanks for the comment. We are slowly making our way south. I can assure you that we'll be in Grenada by the time you get back.

Youre so beautiful with that hair cut. Nice one;) I really admire your look.

It's awesome for me to have a web site, which is valuable in support of my knowledge. thanks admin