It was an “accident” waiting to happen. An opportunity for farce. An inevitable event. Of course it happened to me – or, more accurately – I was the instigator/victim/person in distress.

As do most cruisers, we lock our dinghy to the dock when we go ashore. Theft happens anywhere, and EW and 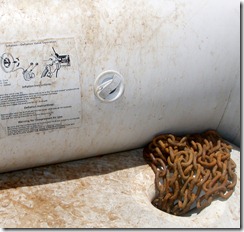 I (particularly EW) prefer to be safe rather than sorry. We have a length of chain that we loop through the towing eye on the dinghy and attach to the dock (or to La Luna in the night) with a padlock. I hate this chain because EW didn’t purchase stainless links and  it’s rusting. (If you know how I can remove rust from his T-shirts and shorts, please let me know. It must be a product I can find in the EC. Thank you.)  Other people have plastic coated cable for this purpose but someone told EW it was easy to cut so he got chain. Did I mention that the chain is not galvanized or stainless? It rusts, you know. 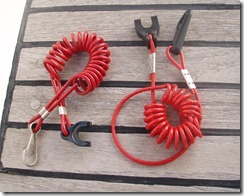 We also remove the dinghy motor “key” from the motor. “Key” is in quotes because it isn’t really a key, it’s a safety cord, designed to clip it to your person when you’re driving the dinghy. That way if you fall out, the dinghy will stop rather than run over you. We fasten it to our person when we have a long dinghy run or when we’re in rough water, such as Georgetown in the Bahamas.

In Maine, we left the “key” clip on the motor at all times, so of course I still forget to use it and have often grown frustrated  when the wonderful “one-pull” Tohatsu doesn’t start. Strange men on the dock stop to help and say, “Shouldn’t you have a key?” At which point I throw up my hands, swear (hopefully silently and without my lips moving – which does not make me feel better) pull out the “key” from my pocket/officiant bag/under the groceries and 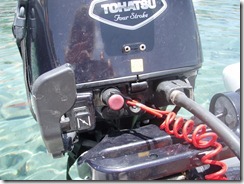 start the motor with one pull. This has happened more than once -- a lot more than once, all the way down the coast. My favorite dock helper was in Georgetown who said, “I don’t know why we all insist on removing these things. They are universal. If someone wants to take your dinghy all they have to do is bring a $5.00 key and start your dinghy.”

Exactly. I tried to tell EW that but we still remove the motor  “key”.  When the wise person hops into the dinghy he or she has the red safety “key” and the floating key ring with two padlock keys on it – one for the chain and one for the motor lock – a device that prevents theft of the motor only. We only need that key when we place or remove the motor from the dinghy. 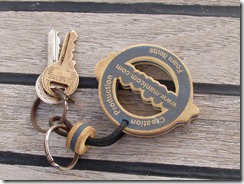 Back to the Deshaies experience.  EW was repairing the pump on the head – a project that is not known for putting him in a good mood. I wanted to go ashore to grab some produce and yogurt and dump the garbage before we hauled anchor. EW had been in the dinghy that morning, cleaning the waterline so the motor “key” was attached to the motor and the chain was detached from La Luna. The padlock was in the dinghy.  I loaded the garbage, recyclables, and my bag into the boat, started her up with one pull and headed to the dinghy dock. I tied the boat, unloaded the garbage and my bag, got out the rusty chain and locked the boat and at the moment I heard the lock click, I realized that the key ring was not in the dinghy and knew immediately that they were in EW’s pocket. Aboard La Luna. In the anchorage.

It’s eighty degrees here in the morning so I had to resolve this issue before purchasing milk and yogurt. First of all, there were two other dinghies on the dock. must be some sailors here some place.. I walked the length of town and asked a few likely people if they were off a boat. None were “au bateau”.  Remember,everyone here and most of the boaters are French and I don’t speak French. One salty gentleman only understood the word “Boat” and pointed in the direction of dinghy dock/fishing dock where the bateaus are. He said “bateau” and waved his hand in the right direction. He was very helpful but didn’t know what I really needed.

So I walked past the dinghy dock to the public dock where dive boats, fishing boats, and locally owned pleasure boats are moored and chose a fishing boat with relatively young captain and crew. “Pardon” (with my fake French accent) “Monsieur. Do you speak English?” “Oui, petite,” he said. (It’s never a good sign when they say “yes” to that question by answering in French.

“I am stupid,” I said. From his look of alarm he did understand that word and knew I wasn’t Madame Stupid. “I have dinghy?” and pointed in the direction of the dinghy dock. “Oui,” he said. “I know dinghy.” Good. Picture elaborate hand signs as I said, “I lock dinghy to dock and found I do not have the key. It is on my bateau.” As I waved my arms out toward the anchorage. “Ah!” he said. “You need get to your boat!” and gestured me aboard. “Oh merci!” I said.

He had been preparing for a day of fishing and was selling some bait fish to the fisherman in the next slip. So first he reached into his iced fish box and brought up eight or ten small fish, handing them over to his neighbor. When one dropped near my feet I nonchalantly picked it up as they had and passed it over to the other fisherman. “Merci,” they both said.

Then he fired up his motor, backed out of the slip, made a quick cell call and headed out to the anchorage. I pointed out our boat and he gestured and nodded and headed for her. As we got near, I cupped my hands and yelled, “Ahoy, La Luna!” We heard nothing, so I repeated the call and we both heard EW reply in a tone that indicated he was up to his elbows in something. My rescuer laughed and EW came up on deck to find me in a bright yellow wooden fishing boat. 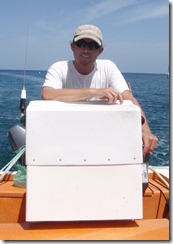 “Do you have the key to the padlock?” Eye roll.  Of course he did, but this is not his fault, asI was responsible for taking it with me. The fishing captain maneuvered the boat close to La Luna for the hand-off and took me back to his dock. I “Mercied” him all over the place and went on my way. EW is still rolling his eyes. Life is interesting. And yes, that’s our only key to the padlock. I lost the other one overboard in the Bahamas. But we have an extra red cable “key”, because you can purchase them for $5 to $10 dollars in any marine store and they are universal. Yeah, that’s secure.

POSTSCRIPT:  I mentioned to EW that I was writing this post and said, when we get to a marine store, we’re getting stainless chain or cable for the dinghy. “I’m done with this rust!”  “Oh,” he said. “We still have that cable we were going to use. It’s in the aft locker.”

We’re using the stainless cable. I’m still trying to clean the dinghy. I think the clothes are hopeless.

Thanks for the smile this morning Barb!

You are entirely, welcome, Mike. Glad you enjoy it!

Funny! You know that those of us with "keys" will be trying to move your dinghy when you're not looking now don't you?

Oh, man! Now I've done it! We are now a target - as we should be. Looking forward to seeing you again. Leaving for St. Lucia tomorrow. Hauling out at Rodney Bay early next week.

We have our own dinghy disaster to share with you, Barb. It's at http://threeatsea.net/2011/06/16/getting-dingy-with-the-dinghy/. Must be something in the air, n'est-ce pas? We arrived in Bequia today. See you down island.

Pretty good post. I just stumbled upon your blog and wanted to say that I have really enjoyed reading your blog posts.