Caught in the Net and Country Music in St. Lucia

We’re from Maine and know a lot of folks who fish for a living. We also know the rules of the road for boaters – whether we’re sailing or under power, it’s up to us to get out of the way for working fishermen. Nothing in the rules discuss what to do when you’re at anchor. Who would need a rule for that?

Over the past week or so we’d sometimes seen one or two of their small open fishing boats sitting in the bay while a few men in snorkel gear checked the waters for fish. We wondered what kind of fish they were seeking and how they would catch them. Now we know how it’s supposed to work. Yesterday morning EW and I were minding our own business aboard La Luna, at anchor in Rodney Bay, when we heard small boat engines, whistles and shouting. 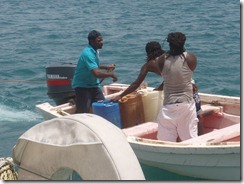 On deck we discovered one of those fishing boats, behind our stern, towing one end of a net with floats. “They’ve gone around FoxSea!” said EW. “No. I said. “They must just have gone in front of her,” not believing him. “You look,”  he said. So I did, and he was right – again. Off our stern sat FoxSea at anchor with the large net being pulled by two boats heading towards shore. The one that had been behind us came just along our port side. I was elated to have a show to watch and grabbed the camera. EW grabbed a boat hook and a fender as he was concerned about the fishing boats on our newly polished hull and the fish net and our rudder and propeller. EW is a smart man.

There were two men in each boat and four or five in the water along the nets, and a lot of shouting and hand waving. Here's Vicky's account from FoxSea: 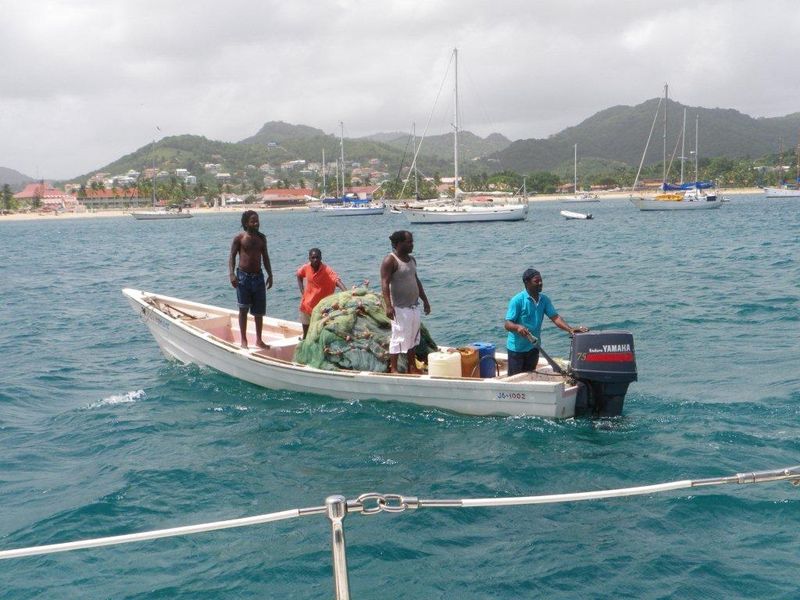 At breakfast, we noticed a local snorkeling around the boat. MMMMMM, wonder  what he's looking for?  Later a boat arrived with much chatter and the fishing net.  We inquired. Answer, we're going to catch the fish under your boat.  Do you want us to move?  No, we'll just moved your anchor, don't worry.  Then they leave. 1 hour later, more chatter, more fishermen, more boats. We look out, nobody says anything, so we go back to work.

The men in the water told them that there was a school of jack under FoxSea. Well, OK, but how did they intend to net them around FoxSea’s anchor and chain? This did not seem to be a well thought out operation. As Bob said later, “If they asked us before setting the net to raise anchor for a bit so they could fish, we would have – but I bet the fish would have moved when we did.”

The local fishermen apparently don’t have radios – and the swimmers wouldn’t be able to use them anyway, so communication consisted of whistling, yelling and much hand waving. To each other, they talk in Creole or St. Lucian Kweyol, so while we could certainly hear everything we could understand only a little of what was said.

It took them a long time to circle the net as they had to deal with the two sailboats, FoxSea and La Luna, and it was determined that FoxSea had to raise her anchor and move. Bob and Vicky had to maneuver their boat, engine running, raise the anchor and avoid a net being moved by the current and three swimmers off their stern. I didn’t envy them.  And, where does a sailboat go when it’s encircled by a floating 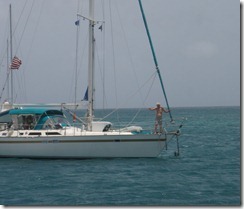 fishing net? The Fisherman-in-Charge yelled and gestured for them to head towards shore and go straight to the opening between the two fishing boats. The guys swimming on their stern told them to let the boat drift back and they’d take the net under. Since not running your engine while surrounded by a fishing net is better than running your engine, FoxSea elected to drift back and allow swimmers to take their net under the boat.  That worked just fine for FoxSea, and looked like a smooth operation from our view. Here's how Vicky described it:

Louder chatter, we look out.  A net is wrapped in a large circle around the
boat and would we please, raise the anchor and let the boat drift back.
What?!  How can we do that surrounded by a floating net?  About 4 start
talking at once in their English.  Our response "You want what?"  So we
finally understand, we are to pull up the anchor, shut off the engine, let
the boat drift away from the net with a snorkeler on each side of the boat
watch, then just drop our anchor.  Now we have out 125' of chain on the
bottom and there is a 60' sailboat anchored about 175' behind us plus the
net is on one side of another sailboat.  Net in the prop is carefully
discussed.  NO worry, the snorkelers are going to keep the net out of our
18 ton boat's prop.  Oh ya, this is one crazy day. So we start pulling ... just as the
wind pipes up to 20 knots.  So we start forward with Bob operating the
remote which activates the windlass and I'm driving with a snorkeler in my
phery on each side and the floating net too close and at least 30 people
watching.  When the anchor comes up, the wind catches the bow and swings
very close to the net, now everyone is yelling, "you're getting in the net".
Pedal to the metal in reverse and away from the net.  Now the snorkelers
want to swim under the boat to clear the net, so we shut down the motor.
Crossways to a 20 knot wind  in an outgoing fast current, we are quickly
drifting into the boat behind us. The owner is one of the watchers.  Quickly
the net is cleared and I drive around to a new spot to anchor.

They then motored to a new spot, out of the action.

Apparently the fishermen believed they still had a fine catch in a net that had been lowered under a 6.5 foot keel and open on the other end for a half hour while they figured out what to do with the sailboat.

In the meantime, EW was patrolling on La Luna’s port side and I 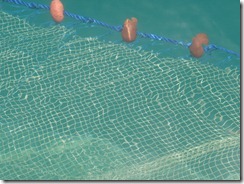 was taking photos. (We all have our priorities.) EW was still not pleased about the net near/under our boat and the fishing boss was less than pleased about our boat near his net. “Raise the anchor!” he said. EW said, “Absolutely not! I am not putting my boat in jeopardy by starting the engine with your net right there.” That seemed to make sense to at least some of the fishermen and one in particular stayed near our boat to keep the net free from La Luna’s rudder, prop and anchor chain.

He looked up and asked, “Do you have flippers I can borrow? I broke mine.” Frankly, I wasn’t sure how EW would respond, but he said, “Certainly. What size are your feet?”

He then told me to lower the swim ladder for the swimmer who changed out flippers. “I’ll bring them back,” he said. “Thanks!” 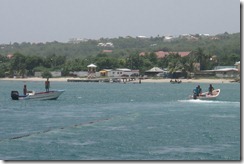 Throughout all of this, there was much yelling, hand waving, and whistling from the fishing boats and the swimmers. At one point, one of the more experienced ones near us looked at the Fisher-in-Charge and said, “What the shit he’s doing ?!”  (Pardon the two punctuation marks as I could not tell whether that was a question or an exclamation. It is certainly a colorful phrase and one that will probably be repeated on La Luna. I love that  - “What the shit he’s doing.”)

As the morning progressed, we’d noticed amplified music from shore. Loud amplified music. At first we heard tunes with a Caribbean flavor, then some odd songs, such as “Girls Just Want to Have Fun” and then a whole CD of really awful Country Music. EW and I like pretty much all music, including Country, but this performer murdered every song we knew and performed/wrote some awful songs we didn’t care to know. Eventually we realized that the music was coming from the fishing port of the Gros Islet community.

After FoxSea safely re-anchored, they lowered their dinghy and Vicky hopped aboard. I assumed she was going to check the anchor or confirm that nothing bad happened to the propeller. My bad. There was a cruising ladies’ lunch scheduled and Vicky immediately left to pick up a friend and head ashore. (We all have our priorities.) Bob stayed with the boat. He and EW communicated by radio and about an hour later he wanted to move again as it was too rolly in his new spot. I took EW over to FoxSea to help Bob and I kept the dinghy as the fishermen had finally circled the net and I wanted to get photos of hundreds of fish flopping into their boat.

When I got back to La Luna, it was apparent that I wouldn’t need the dinghy because the action as again off of our stern, where the Fisherman-in-Charge and others were hauling the net into his boat. I was ready. Waiting for the fish. They were hauling the net. And hauling the net. And since the net still ran alongside our boat, they got closer as well. I quickly put the camera down and grabbed a fender holding it between their outboard motor and La Luna’s hull as they drifted past us, hauling in the net.

The man who had borrowed EW’s flippers came over and said that he could return them, now. I lowered the ladder again and we made the exchange – and then he told me. “No fish. All escape.”

When I told EW and Bob, EW said to me, “See, Bubs, it happens to professional fishermen, too.” (No, he’s not defensive, is he"?)

We felt bad for the fishermen; that was a lot of work, 9 men, 2 boats,and at least three hours of labor, for no return. As the music played on into the night, EW and I came to believe that they had intended to catch some fish for their barbeque, a birthday party for a local fisherman. The party and music lasted until well after 1:00 AM. I hope they had chicken as a back up because it sounded like a lot of folks had attended. As the night wore on, more bad country music made it into the DJ’s mix, including an appalling birthday song in which the singer/birthday boy is sad because "you aren't here." Oh yeah, happy birthday. Bob hates country music of any kind and EW felt sorry for Bob last night. I felt bad for the fishermen, but still wondered how laying your net around an anchored sailboat could work. What the shit’s he thinking?