Oh! The Places You'll Go and the Boats You'll See 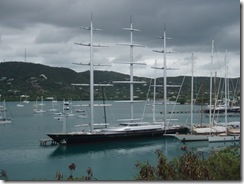 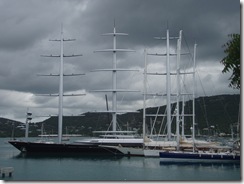 When EW first visited Antigua, he helped friends sail across the Atlantic from the Canary Islands, and as they neared English Harbor he saw a strange boat in the distance. “We were sailing into English Harbor and she was sailing out. We watched them tack, there was some kind of race starting. It is very nimble for a boat this size -- she tacked as quickly and easily as a dinghy.”

When he returned to Maine, he learned more about the boat. According to Wikipedia, EW’s right about the ease 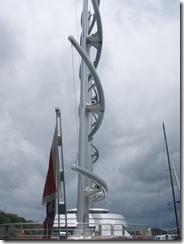 of the rig: “It was built after the dynaship concept, a 1960s invention of the German hydraulics engineer Wilhelm Prölss, which was intended to operate commercial freight sailing ships with as few crew as possible. The ship has fifteen square sails (five per mast), stored inside the mast; they can fully unfurl into tracks along the yards in six minutes.”

As we sailed into English Harbor, EW spotted the masts of the Maltese Falcon looming over the entry of Falmouth Harbor and was delighted to able to show me the boat (from a distance, of course). We hiked over to Falmouth Harbor and were able to get onto the dock for a closer view. EW wanted me to act cool – as if we belonged there – and at first told me not to take any photos, but The Maltese Falcon was docked right across from Vesper, a boat that heads to Portland Yacht Services in Maine soon and we had a reason to be on the dock after all. Out came the camera and I took a couple of shots – from the dock: masts and her stern. 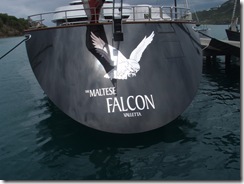 An article on Yacht Pals has views of the boat that I’ll never see.

Fun facts from that article:

We were sorry to miss the Classic Boat Regatta, but were delighted to dinghy around the harbor when we first arrived to view the boats still moored here. One was Elena of London.  I do not have the words to describe this boat. 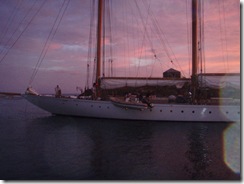 As we were settling into the cockpit with sundowners the other night, we heard one long blast of a ship’s horn followed by many shorter blasts from other horns, then the boom of a cannon. Elena of London had hauled in her lines and was leaving English Harbor. I ran for our camera and EW grabbed our safety horns. First, he tooted on the manual one – an anemic sounding effort. As Elena motored past, her crew was raising the dingy just off our stern when EW found his voice with the air horn, 15 feet behind me. I’m thankful that I didn’t fall into the water, nor did I utter an expletive, but I did jump about a foot off deck and exclaim, “Jeesum Crow!”  The young crew members on Elena laughed long and hard as I took a bow. That’s a pretty good send off, isn’t it? 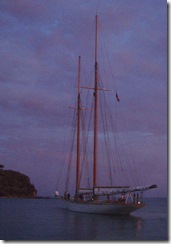 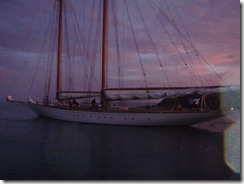