Funny You Should Ask - A Tuesday Relationship Post from BarbAtSea

Here’s LaLuna, anchored in Five Islands, Antigua last week. Yesterday we sailed to English Harbor and plan to stay here on anchor for at least a week. 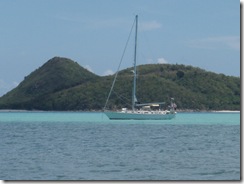 It’s a charming, well-protected harbor with a short ride to the dinghy dock and excellent wifi in the anchorage. These things make me very happy. The wifi isn’t free – but it’s fairly priced and it’s fast.

I went ashore this morning to pay the environmental and port fees and met three lovely ladies from England. They flew here with their husbands who are participating in a “Shooting Match”. Somewhere on the island teams from England and many of the West Indian Islands (as the Brits say) are firing rifles at targets. Their wives – or these three, anyway – are touring and shopping and “We don’t tell them how much we spend, dear.”

When I told them we were here on a boat and had sailed down from Maine, they asked me some of the usual questions, and then one said, “You must get along well. What happens when you argue on board?” “Funny you should ask,” I said with a laugh. “We had a moment yesterday afternoon.” They all laughed. We did have a moment and I must admit it still rankled a bit until this morning, and it certainly felt last night as if the boat wasn’t big enough for the both of us. But right after the moment (or in the midst of the aftermath), we knew that we had a boat issue and we had to work together to fix it.

The topping lift – a line that extends from the end of the boom to the top of the mast – had somehow gotten tangled around a spreader when we furled the main yesterday. Someone had to go up the mast to the second spreader and that someone was me. So while each was justifiably angry with the other (joint fault here – I was not a wronged party), for the second time in a week I had to strap into the boatswain’s chair so EW could lift me up the mast – higher than I’ve ever been before.

We calmly got to work, both pleasant to each other, though I was certainly quieter than normal. He made perfectly sure I would be safe, gave me careful instructions and used the anchor windlass to lift me so high that I had to work my way around the radar dome and a Firdell Blipper. (The Firdell Blipper is a second radar reflector; EW says that we have two because he wants to make sure we are seen. I can get behind that.) Once at the level of the second spreader, I was able to reach out to the end of it and flick the topping lift off. Then EW lowered me slowly back to the deck and made us G & T's.

We still had some things to talk through, but really – how can you stay mad at someone while working together in these conditions? So, yep, we have challenges like any married couple. So far we appear to be resolving them just fine – with La Luna’s help. I may try to convey to her that next time she could choose an issue that doesn’t require I end up 40 feet above the deck.

Oh! Here’s progress for you – I wasn't scared spitless at this new height. I’m definitely getting better at it.  Next time I may look down or take in the view. 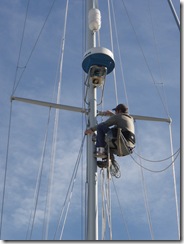 Yesterday was not a photo op so here is John from Great Island Boatyard, working on our mast before we left. Immediately above John is the radar dome and the white blob above that is the Firdell Blipper. (Love that name. I didn’t know I had a Firdell Blipper. Now I want to use it in conversation.)

John is at the first (lower) set of spreaders. I went higher this time.