One Local Boat at Deshaies

In the previous episode, EW and I had tried to travel by bus to Pointe a Pitre or “P a P” as it’s abbreviated on the busses, but were stymied by a one day “slow down.”  The Brits here may like Guadeloupe but they don’t have a lot of respect for the French.  To a person, every Brit who heard our story said, “The French! They are always on strike.” Now we know.

Here in Guadeloupe, the French are nearly always helpful and courteous, as evidenced by the wonderful locals we met on our P a P Adventure.

1. The Professor. When stuck in Sainte Rose the first day, EW approached a white gentleman, who turned out to be a retired professor who speaks some English. At the time , he had no idea there was a slow down by the bus drivers, but he gave us his phone number and suggested we call him that evening and he’d let us know if we would be able to reach P a P the next day. Nicolas proved to be a great help. Yes, the bus system would be fully operational. He also had called someone about marine facilities in P a P and told me, “When you get to the bus station, take a taxi to Bas du Fort. Did you understand me?” Well, I understood the taxi, but didn’t quite get the name he had said, so he repeated it twice and spelled it. “Do you understand? Repeat it back to me.” I did understand and promised to that we would take a taxi to Bas du Fort, where he said they had a good marina and the ladies in the office spoke English.

2. The Young Bus Driver.  The next morning, EW and I set off from the boat determined to only ride a large bus 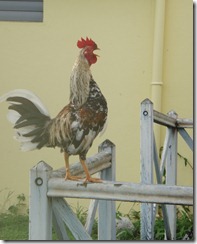 that declared it served Pointe a Pirtre and Deshaies, and not take a little bus to Sainte Rose. However, evidently very few of the large busses actually pass between Sainte Rose and Deshaies. At least, that is what we inferred from the driver of the first small bus that stopped. This young man in a baseball cap spoke no English,but he and one passenger were very expressive in letting us know that we must ride a small bus and change to a larger one in Sainte Rose. With eyebrows raised, EW and I looked at each other and agreed to take the little bus. We climbed into the rear seat and off we went once again to Sainte Rose. These small busses are more like family vans that seat 9 comfortably and 11 squished in. They stop at each bus stop, tooting their horn just before arriving so that folks waiting will know a bus is coming. Twice we’ve been on one of these that has gone off the route to deliver someone directly to their door. Most are very well maintained and have little printers to provide a receipt for the $2 EU fee. One was much older and did not.

The drive to Sainte Rose is a beautiful climb through the foothills, past colorful, well cared for homes and 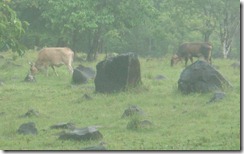 languid cattle tethered in the fields, with ocean views to the north. Many of the homes have a metal roof, reminiscent of those red barn roofs in rural Maine. Here they come in red, blue, and green and compliment the colorfully painted houses. Riding through Guadeloupe is a treat. Our young bus driver not only drove us through town to the appropriate bus stop, he also confirmed with the driver that this bus would indeed leave shortly for P a P.  This ride took us through small towns and sugar cane fields, stopping frequently for passengers.

3. The Guy at the Depot.  When we arrived at the Bus Station (pronounced Boos State) we saw no taxis, and the office was locked, but we were determined to do exactly as Nicolas had instructed.  A young man (again with very little English) asked if he could help. We said we wanted a taxi to Bas du Fort and he loped off with a gesture that we should follow. Again, EW and I shrugged a “why not?” and hurried to keep up with him. He led us thorough an enticing market and along two city blocks. The area definitely seemed safe, but the day was very hot and we did not want to walk all the way to the marina. Suddenly, we saw a bank of taxis, and our guide went to one of the drivers and gave us over to him, explaining our destination. EW shook our young friend’s hand - and provide a private tip, which he didn’t seem to expect at all. The taxi driver took us directly to the Bas du Fort, where we easily found the office.

4. Agnes from Tennessee via Brazil. While we waited to speak with the clerks, an attractive animated sailor (we could just tell she was a sailor) was getting directions to the large waterfall in Guadeloupe. This chute is on our list, so we shamelessly eavesdropped on her conversation. She also heard us request the locations of the chandleries and hardware stores. As we were walking through the parking lot, Agnes stopped and offered us a lift to a shop where she knew the owner spoke excellent English. Agnes is spending time on the boat alone as her husband is in Europe on business. She’s bored (and a bit lonely) so decided to rent a car and take herself on a jaunt to the chute. Her husband called while we were with her and she laughingly said to him, “I’m so lonely I’m picking up strange Americans to be my friends.”   Then she handed me the phone and told him to “Meet Barbara.” Agnes did not depart for her trip until she believed we were on the right track.

5. The Guy at the Bus Stop Unfortunately, we should have kept Agnes. None of the stores had the hose we needed or any of the things on our want list. No worries, I thought. The cruising guide (which I had brought with us) identified two other stores less than a mile away and indicated both of them would have more items for sale. Then we found out that those stores had moved to the other side of the bay, a drive of over 6 miles. We left the marina and looked for a taxi. How hard could that be? Hard. It didn’t help that we tried to flag down three different vehicles that had lights on the top as taxis do. Each of these vehicles had two people in them and I actually followed one through a parking lot so we could grab the cab when the passenger got off. But they drove right though the parking lot and exited. Three sightings later and I realized the signs on top said: Auto Ecole.  We know them as Driver’s Education vehicles.  I’d been trying to flag down three different  white knuckled student drivers. So we walked to the bus stop, where the bus driver was talking to yet another guy who hangs out at bus stops. That gentleman spoke enough English to get us to understand that we could take this bus back to the bus station (Boos State) and take a different bus to the other side of the bay.

6. Taxi Driver.  As we rode this bus into a more gentrified section of the city we decided to get off at a taxi stand to save time. Our bus driver hailed a taxi for us and we had a rather frustrating conversation with the driver about our destination. He knew that section of town, but did not know where either store was located and was reluctant to take us there. Once we convinced him to please “just drive” and we arrived in that neighborhood we understood his reluctance. The marine stores had moved to a commercial area of wholesale companies and lumber yards. There are no sidewalks and the section is spread out for a number of miles. EW and I began to read the signs with care and spotted both marine stores immediately. Our driver dropped us right at the door.

7. Young Lady at the Bus Stop Having finally secured our precious hose, EW and I walked (under my protest) back toward the city, arriving after 40 hot minutes at a round-about with bus stops on three different corners.. We had lost all sense of direction, and waited at the wrong stop for a half hour. Finally we hailed a bus driver and asked about the next bus to Deshaies. He communicated that we must cross the street (four lanes with a median) and wait for a bus going in the other direction, and he immediately realized that the bus pulling in was indeed going to Deshaies. He tooted his horn and yelled at the driver while we made our way laughing and thanking everyone (stopped cars, the other bus driver, etc.) to the correct side of the road. A young lady had also crossed the street with us, but she didn’t want to go to Deshaies. I was smiling and effusive as I greeted the driver, who wouldn’t let us on board. Yes, his bus was going to Deshaies, but we weren’t welcome on it. He was very stern. The young lady was as nonplussed as I and asked him a question, beginning respectfully with “Monsieur”; I’m not sure what he said to her, but was stern and it was clear we weren’t going to take that bus. The bus wasn’t full, so we assume that he didn’t like our skin color, or our attitude. Maybe he thought the dash across traffic suggested an imperious nature. We did not get on the bus. The young lady, who spoke little  English, still expressed surprise and remorse. We enjoyed her company until her bus arrived.

8. Two Ladies – One in Cool White Pants We waited for over thirty minutes as numerous buses arrived from Saint Rose and Deshaies on the other side of the street, but did not reappear at our stop going the other way. We indulged in watching the people of Guadeloupe. Two women began walking in our direction, and EW actually mentioned first, “Look at those pants! They are cool.”“ They were. They were white pants with very full legs in a light but opaque fabric – perfect for this hot climate, and they looked wonderful on her. As the ladies walked past, they could tell we were talking about them, so I indicated that I thought her pants were “Tres bien” – even “magnifique”. She laughed and blushed and thanked me. Then they asked where we were going and told us we were at the wrong stop. They escorted us to the third stop in the area and made sure to ask others waiting there if it was the right location. We thanked them, and they resumed their walk. A bus for Deshaies arrived less than 15 minutes later.

This is a beautiful country with friendly, helpful people who are fortunately so expressive that they can communicate when we need help. We were two white English speaking strangers on a French island and we had a marvelous experience. The next day we did boat work and EW repaired our engine. Finding the part took two days, and it was worth it.

Ah, the idyllic, peaceful days of a liveaboard sailor. Nothing to do but watch the world go by from a reclinig position in the cockpit.... Don't we wish.

Thanks, Lynn. The Cruising life isn't a bed of roses -- but what is. I thought of you often as we trekked to Pointe a Pitre.