Home Archives Profile Subscribe
Oh! The Places You'll Go and the Boats You'll See
Books from Maine and Hands Across the Sea

Dirty Dancing at a Lime in Shirley Heights 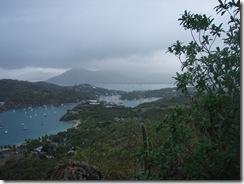 I was relieved that I’d refused to be one of the “three lovely ladies” the singer requested join him from the audience. EW suggested I go on up, but after spending the past two hours listening to the music and watching the tourists, I realized that my brand of loveliness and willingness were not those sought on stage.

On Sundays at the Shirley Heights Lookout in English Harbor, they host a “Lime”.  According to the Urban Dictionary, in this case “lime” originated in Trinidad and means:

a (v) hanging out/socializing in an informal relaxing environment, especially with friends, for example at a party, or on the beach.

(n) an event at which liming takes place, e.g. a party. A gathering of people engaged in activities associated with liming. Often qualified using an adjective e.g. big lime.

(v) We liming on the beach today

(n) That party going to turn out be a big lime. 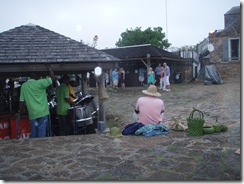 We’ve been in the Bahamas and Caribbean since December 25th and I still hadn’t heard a live steel band so when we saw that the lime on Sundays always begins with a steel band, I knew what I wanted to do on Mother’s Day. I put on my dress, we took the dingy ashore and easily found the trail up to the lookout, figuring to take the road back down after dark.  According to the sources on the web, the steel band would play from 4 to 7 followed by a live band that played rock and roll and Caribbean favorites, and we’d be able to purchase rum punches and a local meal. Sounded great.

A review on line from a tourist who had attended as part of a package tour had been lukewarm on the event, “Unless you like steel band music”. Well, D’uh! He did express disappointment that it wasn’t a truly mixed crowd; make no mistake about it, this “Lime” is produced for the tourists and relatively few locals attend. I already knew that was the case because I have cracked the code in Antigua. If a fee is expressed in US dollars, that means that locals rarely, if ever, partake of said item or event. For example, it costs $10 US to do a load of laundry at the Nelson Dockyard. I assure you that no local person ever takes his or her laundry there. It’s a good place, and the fee is reasonable to us, but locals don’t go there.

The steel band playing that night was exceptional, they are the A.M.P. Halycyon Steel Orchestra and are celebrating their 40th anniversary this year. You can hear and see them on YouTube in a number of videos, including one from the 2008 Moods of Pan Festival.  There were about a hundred people when we arrived, scattered over the grounds. (That’s the photo above.) Shortly afterward, taxi vans dropped off folks from resorts in Antigua, and it became an evening of listening to music and watching people. One local that EW and I called RastaMan had been dancing alone near the band for some time before a tourist joined him. They both could dance, but they had moves that would make my mother blush. Having watched Dirty Dancing and just a teeny bit of Dancing with the Stars, I had seen some of these moves, but in a routine, not over and over and over again, as we witnessed at Shirley Heights.

We chatted with tourists, and felt superior to them as we were on our own on a boat and not being herded like sheep from one event to another. This isn’t fair, I know, but we have not developed a favorable impression of the average US or even European tourist on a cruise or in a all-inclusive resort. There’s definitely a “What happens in the islands, stays in the islands” mentality and some people aren’t satisfied no matter what.  I was checking out the bar when a van pulled up and one woman walked inside and sat at a table. “What are you doing, Caroline?” her husband asked. “I’m sitting down. There’s nothing going on out there.” Let’s see, amazing view, even on a cloudy night, outstanding local music, lots of people to ogle. Nope, nothing going on out there at all. The people watching alone was worth the trip. There were many young or youngish or young at heart ladies in revealing outfits and very high shoes – on a mountainside and on a uneven stone terrace, mind you; and a lot of young and young-ish or young at heart men who wore long sleeved oxford shirts with shorts and kept unbuttoning their shirts as the night wore on. Ooooh. Chest hair – or not. There was cleavage, upper and lower, but not a six pack in sight.

We danced, we laughed, we loved the music and spoke with folks who knew the band, we ate and 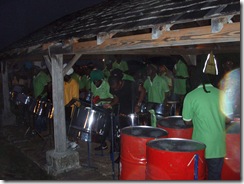 drank and had a ball. When the steel band stopped at 7, there was a smooth transition to the next band, which had already set up on a nearby stage. The lead singer evidently has a lot of experience with tourists who’ve been drinking rum punches for the past two hours. He encouraged the conga line, allowed the ladies in the high heels to dance on stage with him and even held the microphone for one who sings worse than I do.

Then he began to teach us some Caribbean dances. The first one was that simple left right front back thing. The little jumps to the front were difficult as we were going up a slight incline on the said uneven stones, but we remained unfazed and unscathed. Then he decided to teach us the dollar song and EW suggested I go on stage. Uh, no. Thank you, but no. Whew. Let’s just say “Show me the money!” was a part of this song. Nickel to the left, dime to the right, and dollar dollar dollar.EW was astonished and I turned to him and said, “Are you as happy as I am that I didn’t go up there?” He was.

The lady who had danced the duo version of the dollar song with the Rastaman was the best on stage as well. She really can dance. At one point in the evening she danced with a young man who was an exceptional dancer. They danced to a Latin rhythm, she wore a red tank top and short flirty skirt (totally appropriate outfit – looked great on her) and he had on a large red white and blue baseball cap, baggy shirt, flip-flops and (no kidding) his computer in a messenger bag across his back. He could dance circles around every other man there and they were a delight to watch. But she like the dollar dance better, I think, and went back to Rastaman later on.

I’m not sure whether EW and I are getting old, or just isolated by not having TV  and by missing whole seasons of first run movies. If this kind of dancing is prevalent back in the states, we’re going to be very out of step. In the meantime, we hope to attend real limes – over the summer when the local islands host band competitions. I’ll let you know about the new steps we learn there. Maybe. What happens in the islands may stay in the islands.

Ahhhh! I see you ended up at Shirley Heights after all. Neat place. We usually climbed on top of one of the several low buildings and watched the crowd. Always entertaining.

We did enjoy Shirley Heights. What a view -both of the fauna and the shore.

This has been a great stop, now on to Guadalupe.