15 Easy Steps to Defrost a Boat Freezer in Paradise

Does anyone get excited about defrosting the freezer? I never did and was delighted with our frost free freezer/fridge combo in the Home By the Sea. (Confession, when we bought the house we called it Love Nest by the Sea. Really.) When we moved aboard La Luna, I remembered the “old” days of defrosting a freezer and believed that the chore had to be as difficult as possible and take as long as possible, so I made that happen. Here’s the process:

1. Remove all food items from the freezer and take them to a friend’s house or to the boatyard freezer

for safe storage. After all, the job is going to take hours. Here’s my friend Lynnelle’s freezer, used once when she was out of town. I had to remove two bottles of vodka to make room for my stuff.

2. Remove all of the food from the fridge, throw out the old, exclaim over the number of jars that are half full of substance, and store all of it in two coolers, with ice because it’s going to take hours to defrost the freezer and you don’t want anything to spoil.

3. Turn the system off. That’s done with the flick of a button. Easiest part of the job.

4. Place a bowl of warm water in the freezer.

5. Wait for frost to melt and do something useful while waiting such as clean out the fridge side.

6. Get tired of the frost not melting and pour warm water over the frost, creating ice, which will melt eventually.

7. Bail out the bottom of the freezer so that it doesn’t overflow as the ice melts and pour more warm water over the ice to help it melt.

8. Pry large chunks of ice off the front of the holding plate – carefully. Suggested tool is a plastic scraper. I used a table knife but don’t tell anyone.

9. Mop up water from galley sole (floor to you landlubbers) as the falling ice has caused the water in the bottom of the freezer to splash out.

10-12, 13-15, and 16-18 Repeat steps 7, 8 and 9 for two to three or more hours. Ice will have formed on the back of the holding plate where no scraper or table knife can reach it. It’s also difficult or nearly impossible to pour warm water on that area. Try anyway.

20. Return the cold goods to the fridge side.

21. Hours or a day later, go get your frozen stuff and place it in the now cold and clean freezer. (Make sure you put Lynnelle’s vodka back in her freezer.)

Yeah, that was fun. Of course, when I did this, we lived on the dock with easier access to a freezer. (I have really good friends) and a couple of coolers. Now, I’m traveling where I don’t know anyone on shore, 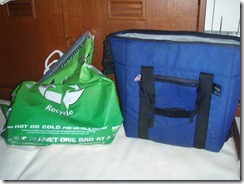 and we only have one smallish soft-sided cooler and two of those large, cheap, hot/cold bags you get at the grocery store. The old system wasn’t going to cut it at sea, yet I didn’t know of another way. I hate defrosting the freezer, therefore it must be difficult, therefore I hate it. It’s a vicious cycle. It didn’t help that a marine refrigeration expert told me that I should probably defrost every four to six weeks. Like that was going to happen.

Well, yeah, it was. We’ve been experimenting with how to better insulate our system (there’s a post 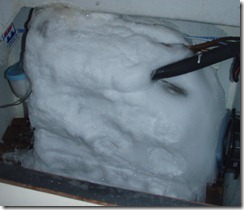 coming about that) but even with improvements, we find that the freezer gets mighty frosty in this warm climate. When the frost is thick, the system isn’t efficient and eventually, both sides get warmer. Warm is not a good quality for a freezer or refrigerator. I was discussing this in the Bahamas with some of our cruising buddies and found out that aboard two of the boats, the guys handle the defrosting. They entered into the task with fewer negative expectations than I had, and with some knowledge that I had missed somewhere. I’d heard of folks using a hair dryer to warm and melt the ice and I’d tried it on the dock but found it frustrating and cumbersome as I could not leave the hairdryer running and walk away.

These boaters use a fan, a normal household fan normally used to cool our persons on a hot day. Last summer, one of our neighbors in Harpswell had told me that she used a fan to defrost the small chest freezer on her powerboat. I didn’t yet understand how it could work and never pursued it, but now I needed to know, so I went online for a little research: why does ice melt faster with a fan? I still don’t know.  I found out that ice melts quicker in room temperature water than in air – though one article mentioned that if you hung an ice cube in the air in front of a fan it would melt faster. (Who thinks of this stuff?)  Other articles discussed the steps for defrosting home and marine freezers pretty much as I described above, though they make it sound easier. (They lie, I speak the truth.) None of them used a fan. My mom had to defrost the freezer when I was growing up and she didn’t use a fan, either.

Today, I used a fan. Since we purchased “Jenny” our beloved Honda generator, I can run AC stuff when 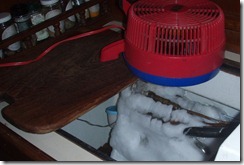 EW charges the boat. This morning, I requested that he get Jenny up and running because I had plans for her – big plans. I have learned that I can leave the food in the fridge side (we’ve pared way back on the numbers of stuff in jars this year) and clean the fridge on another day. The computer fan that circulates cold air from the freezer to fridge still sends cold/cool air to the fridge side as I defrost, so though the temperature gets a bit warmer than I normally would like, it isn’t dangerous and will cool down when the system is restarted.

1. Remove all food items from the freezer and pack in the blue soft-sided bag, along with any ice and some of the cold packs used for picnics. Enclose filled blue bag into large hot/cold bag for added insulation.

3. Place the household fan (thanking Neptune that I brought it along for the trip – and remembered where it’s stored) over the freezer, blowing down onto the ice, and walk away.

4. Work on the computer or clean something.

5. Check the progress in an hour and exclaim over how much ice has melted. Bail out the bottom of the freezer, removing large chunks of ice as well.

6. Reposition the fan and go back to something else.

7 & 8, 9 &10. Repeat steps 5 and 6 one or two more times, positioning the fan where it will do the most good. When pointing it down the back of the holding plate, it easily melts the ice that has been so hard to reach.

14. Return the still frozen items to the freezer.

Not only does this method have fewer actual steps, those steps require less of my time as the fan is doing the work I used to attempt with the butter knife, and – this is big and --- the whole process took less than 4 hours from start to finish. Since this is no longer a job I dread, I’ll do it more often and bet I can “get ‘er done” in 3 hours or less, with only about an hour or so of active time. Under these conditions, I can easily defrost every four to six weeks.

You proof-readers will realize that the new way only has 14 steps. Here’s step 15:

15. Make a gin and tonic with the bag of partially thawed ice cubes. Waste not, want not.

The new process of defrosting a freezer sounds easier than the original one. Still not exactly a picnic though.

Definitely not a picnic! I checked out your website and think your bags look cool -- in every meaning of the word. Thanks for your comments.

Thank you so much for suggesting the FAN...I would never have thought to do that. I started defrosting 30 minutes ago and just finished exclaiming to myself how much ice has melted!

What a difference from last time, when it actually took days. The good thing about boat refrigerators is how much insulation they have, but without the air flow from the fan the insulation just keeps all the cold air trapped inside.

Thanks again...you made my day!