Adventure or Debacle in Guadeloupe

NOTE: I apologize for all miss-spelled French words in the following document. I took 3 years of high school German, and two semesters of college Spanish. As you will see, EW and I are not prepared for the French islands of the Eastern Caribbean. 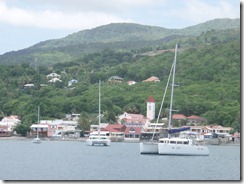 We arrived in Deshaies Guadeloupe on Sunday evening after a mostly beautiful sail from Antigua, a distance of 40 plus miles. The wind died as we neared the Guadeloupe shore and the engine over heated yet again. This time EW knew it was a hose that he had repaired earlier. A new hose is on the chandlery list, but while at sea EW ably applied Atomic Tape to the burst hose and we powered the last mile to the anchorage.

Deshaies (pronounced Day-ay) is a charming town on the northwest shore of Guadeloupe. There are no chandleries, but you can get outstanding baguettes and pan du chocolate. Oh my. Guadeloupe is a “Department” of France, few speak English, but every person is as helpful as they can be. We should be here with Lynnelle, Amy, or Dora, and we must purchase “French for Cruisers”, but in the meantime we are muddling through with – except for today.

According to The 2008-2009 Cruising Guide to the Leeward Islands, Guadeloupe has “an efficient and inexpensive bus system”.  It would take about two and a half hours to ride the bus from Deshaies to Pointe a Pitre, where there is a chandlery, marinas, and all manner of boating equipment and services. “Let’s take the bus to Pointe a Pitre,” I said. “It’ll be an adventure. We’ll get the part on Tuesday, you can install it on Wednesday and we can head south to other parts of Guadeloupe.” EW agreed, so we got up early because the cruising guide also said “Daily life begins … at the boulangerie/patisserie Amandine which opens at 6:30. You can sit at a little table on the street sipping coffee and eating croissants .. while watching the town wake up.” On Monday I was told where to find the bus stop and that the bus left for Porte a Pitre at 8:15. (Actually he said, “Eight .. ah cinqua cinqua cinqua” – holding his hand up to show five fingers, three times. “ Ah,” I said, “Eight-fifteen!” Perfect. Amandine is no longer open, but we did have wonderful grilled baguette sandwiches and coffee, followed by petite pan du chocolate.

EW looks like he really needed that cup of coffee. 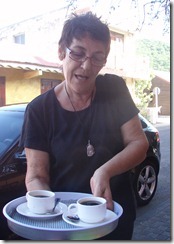 We each ordered a second cup.

After a leisurely breakfast during which I learned how to say “How are you?” and “Have a good day”, we made our way to the bus stop, next to the Catholic Church. 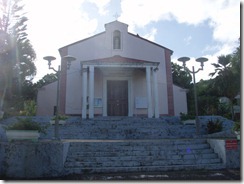 I had used my very limited French to greet those who had passed by our café and had complimented one lady on her dress. She reappeared  to take a bus and tried to help us, but we didn’t understand what she was saying until it was too late. “No bus Pointe a Pitre” actually was her way of saying “You can’t get the’ah from he’ah” – today anyway.

According to what we can determine from our very limited French, and many gestures accompanying limited English by lots of people, the big buses are having a one day slow-down and this is the day. Shortly after the lovely lady got on her small bus to a nearby town, another small bus pulled up and he said that we could get to Pointe a Pitre, so we paid him $4.00 EU and hopped aboard. It was a delightful drive to Ste Rose, a larger town than Deshaies, on the northern coast of Guadeloupe. We arrived there, in love with Guadeloupe, our driver, and this beautiful day – and there we stayed. We spent about 3 hours trying to find a bus to Pointe a Pitre – or someone who spoke English who could give us information. One retired professor tried very hard and has offered to find a car for us tomorrow. An assistant manager at the local bank let us know that there were no marine stores in Ste. Rose. All of the folks at the bus stop and all the drivers in the five large busses, parked on the main street tried to let us know that the buses were on strike or on a slow down. We weren’t going to get to Pointe a Pitre today.

I enjoyed the day and probably drove EW crazy. I love Guadeloupe – the people, the flowers, the attempts to help – the walk through the cemetery. 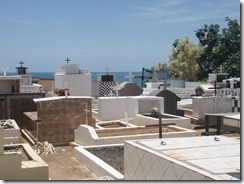 We’re cruising – one day won’t make a difference, but we did need information. So we went into an Internet shop where we could rent time on a computer. Did you know that European computers have different keyboards? I had no idea, but it makes sense as their alphabet has a whole lot of little symbols that we don’t use. What did not make sense to me is that the “A” and the “Q” were swapped as were a few other latters. BqrbAtSeq does not have the same ring to it. The @ sign is paired with the 0 on the top row and can be accessed only with the ALT key. While that top row does contain numerals, you have to use the shift key to access them and are better off using the ten-key at the right of the keyboard.

I went on Google, and Twitter to 1) Determine whether this was really a one day slow down  and 2) try to find a rental car. One of my Twitter pals did a search for me and neither of us could find any news report about the slow down/strike. (The bus drivers need better PR for this plan to work.) My Twitter friends also gave me advice on the @ sign and one re-tweeted a note I’d sent to a local person who evidently wasn’t on Twitter when I was. That whole episode delighted me as well. EW glowered in a chair by the door, but at least the store was air-conditioned.

So, we quit for the day at 1:00 and took a large Deshaies-to-Pointe a Pitre-Bus (no kidding) back to Deshaies. According to what we think the driver said, we’ll be able to make the full trip tomorrow. EW has sufficiently recovered his sense of humor to make an attempt – but I’m going in to Deshaies after 4:30 PM today when Le Pelican is open again to have that helpful English-speaking gentleman assist me in finding out the real truth. No small busses for us tomorrow, we’ll only get aboard a large bus that says “P a P”.   EW believed that  the driver deceived us this morning; I think he believed we’d be able to take small hops to Pointe a Pitre, just as we did to Ste Rose. We just don’t know the country or speak the language and could have ended up anywhere – or in Pointe a Pitre with no way back over the mountains to La Luna.

So debacle or adventure? I’m going with adventure. This country is beautiful, the food is delicious, and the people friendly. We are ignorant, friendly foreigners and have to bend a bit. Today St. Rose – tomorrow Pointe a Pitre!

I knew you'd like this post. You definitely need to visit us on a French Island. To heck with Antigua!