Reaching St. Thomas and When Your Dream is Living on a Sailboat, Anchoring Happens

Yesterday morning we anchored in St. Thomas in the USVI after a twenty-four hour motor to windward. Fortunately we had waited until the winds and seas had abated and it was not an onerous passage. We anchored in Crown Bay amidst many other moored and anchored boats in 25 feet of water with a sand bottom. The sand bottom meant I had to drive La Luna around while EW re-installed our Fortress anchor to use in tandem with the CQR. Once that was done we anchored easily and with little fanfare so we did not provide those having breakfast on deck with any stories to tell – as we had done in Salinas.

What happened in Salinas, you might ask? Well two things. First of all, a perception/communication issue was resolved  -- sort of. Since I had begun taking an active role in anchoring (Bahamas) I’ve been more vocal about where we lay the anchor and how close we are to other boats. As I described, we had motored through the anchorage for a while in Georgetown until we found a spot on which we both could agree. I thought we were cooperating, compromising and learning. EW found it disruptive and embarrassing. Who knew?

Not I until we motored into Salinas and EW said, “Look, one of us is going to pick the spot because I don’t like all the discussion we’ve been having when we anchor. and I don’t want to drive around and around while we have that discussion” Oh. Hmmm. Ultimately he picked as it turned out I was very busy. We were anchoring in mud so only needed the CQR and since the winds were gusting in the 20’s, EW drove the boat and I handled the anchor – something we’ve done for 8 years. Except the anchor would not come out of the locker to the windlass. All of the tacking and beating through waves during the four days from the Dominican Republic to Salinas had resulted in the anchor chain falling all over itself in the locker. There weren’t knots, exactly, but heavy chain was piled on top of the heavy chain that was supposed to be released with the anchor.

It’s happened before in Maine – and I know what to do – scurry down below to the forward cabin, move cushions and the guitar, open the anchor locker and sort chain. Usually it doesn’t take that long, but until now we haven’t been beating in 6 foot seas for four days. I needed to get 75 feet of chain free. I’d rest my forearms on the bulkhead, and use my hands to chase chain and move it around, trying not to get the freed chain covered with newly freed chain. It was a chore and I didn’t get it the first time, or the second, or the third. While other cruisers watched, I made six trips down below to work on chain, returning to the deck each time to find that not enough was freed yet. I didn’t count the trips below, but found that out from a nearby boater days later, as we were having a beer on shore. “You are a strong woman,” said Mike, as he sipped a beer. (This is in a heavy Texas accent. Lovely man with a wonderful wife.) “You made six trips down below.” “Really?” I said. “Yep. I was counting.”

To be fair, EW repeatedly offered to switch roles, but 1) I didn’t want to anchor where he was and 2) I didn’t want to try to hold the boat there – fairly close to other boats (too close for me) in 20 plus knots of wind. He did provide a set of gloves to protect my lily white and tender hands (yeah, right) but my manicure was still ruined and my forearms were bruised for days. Two boaters came by in dinghies offering to help but there was really nothing anyone could do, it was a two person job and we were handling it.  Later that week we removed all the chain from the locker, cleaned the locker and reset the chain with hopes of easier anchoring in the future. I still had to go down below once in St. Thomas to free up a section. If anyone knows how to fix this, please let me know. It’s getting old. Oh, and for those of you who are keeping track of such things, EW chose a fine place to anchor. We weren’t too close to other boats. I was wrong.

In St. Thomas, we first tried to anchor with just the CQR, discovering the sand bottom, so I had already freed up 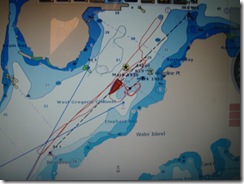 the chain for his use. Since I don’t have the strength to handle both anchors when we use the Fortress with the CQR, I drive the boat and EW is on the foredeck. I drove, we agreed on a spot (chosen by moi) and we set her calmly, efficiently, and securely. I love it when that happens. We had motored through the anchorage looking for a spot, and tried to anchor once, then I drove the boat around while he connected the Fortress, and then we tried again with me driving the boat and agreed the spot wasn’t going to work, and had to find another spot – so though this wasn’t upsetting or embarrassing to EW, the result was the “red spaghetti” route you see here. The red line is our tracking, where we actually went – you can see we experienced quite a bit of Crown Bay prior to actually dropping the hook. 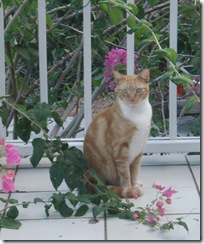 We were tired after our overnight sail, so after a bowl of cereal we “napped” until 1:00 PM. I woke up refreshed and excited. We had dinner with the cousins (EW’s cousin and his wife live here) – and enjoyed a great meal in their beautiful home with two cats and 1.5 dogs. (The neighbor’s pup is a frequent visitor. Here’s Pumpkin on the deck.

15 years ago, EW and I had flown to St. Thomas to visit his cousin and his wife, and I had dreamed of sailing 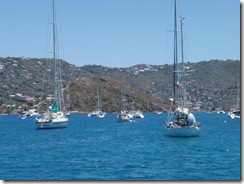 into this harbor in our own boat, so yesterday morning we achieved one of our dreams. I glowed all day. We had done it, we had brought our boat to St. Thomas.  We’ve had challenges (anchoring happens, sand happens, running aground evidently happens) and we’ve had truly wonderful experiences. We will continue from here and achieve more of our dream, and have more challenges and more wonderful experiences. In the meantime, I’m going to enjoy this week in St. Thomas. I’m living my dream.

This is the anchorage facing the end of Crown Bay in St. Thomas.

Living the dream. That's what life is all about. Congratulations, Barb & EW.

Looks like you've anchored at the right place. Great dream, and congratulations on making it a reality. The cat is adorable. That must be the icing on the cake.