Home Archives Profile Subscribe
Back on Line in Antigua
Family Time for the Harts at Sea at St. Thomas, Part Two

Family Time for the Harts at Sea at St. Thomas USVI – Part One

We landed in St. Thomas on Sunday the 10th and left on Monday the 18th, after a wonderful week visiting with EW’s cousin 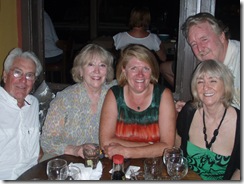 Jeff and his wife, Barbara Hart the First, and EW’s sister who flew down to see all of us. Here we are, dining in an excellent sushi restaurant.

In addition to marrying the right man, I married into a super family. EW’s cousin Jeff, was the Best Man at our wedding 26 years ago. We’ve traveled with Jeff and Barb Hart the First and love spending time with them. EW’s sister, Dale,  lived less than an hour from us in Maine and has cheerfully hosted family events since we sold the house. She’s smart, funny and a good sport as she bravely joined us on the boat for our first Thanksgiving afloat. Come to think of it, that first (and only) Thanksgiving afloat may be why she  so cheerful hosted all subsequent holiday dinners in Maine. She’s not a fool. We’ve missed her and were delighted to see her.

We laughed and shared stories, hugged a lot, ate way too much for dinner with ice cream for dessert, and played tourist. The cousins had to work during much of our visit and I’m afraid Jeff will be woefully behind this week when he finally gets rid of us, but he cheerfully and lovingly played taxi driver, chef, host, and tour guide. Barb and Jeff are excellent cooks, and experienced on the water – between them they can pretty much do anything – plus they have three excellent pets so we got a fur fix every day. We look forward to the day we get to host them aboard La Luna.

St.Thomas is interesting. They drive on the left here, in cars manufactured in the states for driving on the right. 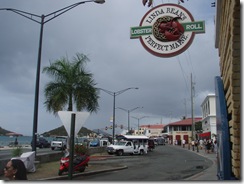 After a week I still tensed up at intersections. The cousins live in a lovely home on the mountain, up a steep, narrow road where we frequently would have to stop on the shoulder to let another car pass. Although they sincerely offered the use of their car, we firmly declined each time. Taxis are cheap and the bus costs a dollar – plus we could use the dinghy to get from our anchorage to downtown and Yacht Haven.

St. Thomas is a duty-free, cruise ship town, with docks and facilities for them at both ends of the harbor and  many, many, many jewelry stores and other shops at either end and in between. EW and I were stunned to see that Linda Bean had a lobster roll shop here. We miss Maine, but did not come to St. Thomas to have a Maine lobster roll.

Walking downtown to see the historic sites, one is accosted constantly by shills hired to get you into their store. I think we could make money selling T-Shirts that say, “SAILOR. Not Buying Jewelry.” One smiling man, originally from New York according to his accent, looked at my old Columbia sailing sandals that have been glued back together with 5200 and said, “Nice shoes, I saw a photo of them on the web and thought that they’d go great with some of the jewelry we have in here.” Really. Interesting approach. I still didn’t buy jewelry.

Since we were in St. Thomas to visit with family, and since we have an appointment in Antigua, we didn’t take 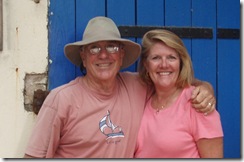 the time to sail around the Virgin Islands. We’ll definitely go back next year for a longer and more cruiser-like visit, but we still had fun. I had two days walking downtown and at Yacht Haven checking out the shops and that was about a day and a half too much – though I appreciated the time with EW and then with Dale. Downtown, two people cannot walk down the street and have a conversation because the shills interrupt you at every other store entrance. They do not take “no” for an answer. EW turned the tables on one cigar store owner by going in a pricing out Cuban cigars. The gentleman didn’t have the particular ones in stock, but told him they would cost at least $200.00 for a box of 25. EW had purchased a box in the D.R. for $15.00. He’s still grinning.

This is a very interesting post about cars; I would like to share it on social networks so my friends and other curious readers will get good information which is useful and bring awareness about cars.

My husband and I are friends of Jeff and Barb Hart...we are planning a trip to St. Thomas in December and I would like to get ahold of them to let them know we are coming, but their cell numbers don't seem to be working...could you give me an E-mail address for Barb so I can contact her about our trip?