Bahamas Spam, Georgetown and Beyond 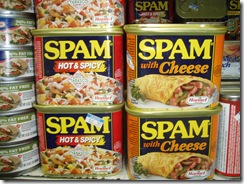 By the time we got to Georgetown, we were slightly less freaked out about the potential for running aground, we better understood and enjoyed the concept of Buddy Boating, and we could actually provide advice and help to other cruisers. We were still newbies to this lifestyle, but were not quite as green as we had been in the Berry Islands and Northern Exumas

Thanks to our new  friends (and hopefully friends for life) Eleanor and Fabio aboard Amandla, we also acquired   photos of ourselves and La Luna. Here is a shot of EW and me 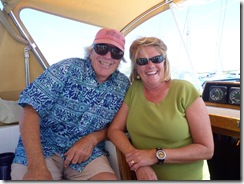 that Eleanor took when we hosted a brunch in Georgetown. Here’s Eleanor’s photo of EW climbing a small cliff on Conception Cay. This island is a national park, but there are no rangers stationed there. We aren’t sure whether cruisers or local officials mark the trails and provide lines like these up the steep parts, but we are grateful. 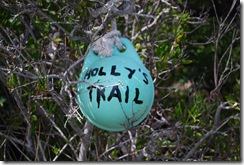 Eleanor also took this shot of a trail marker. The trail was labeled “Holly’s Trail” in at least two places. At the first marker, we took an unlabeled trail closer to shore in one location and had to scramble over sharp coral. We stuck with Holly after that. 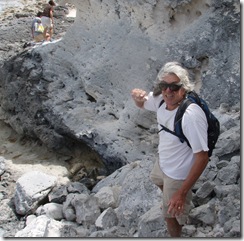 Here’s EW taking the Non Holly’s Trail. Eleanor and Fabio have gone on ahead and I’m getting ready to pick my way down over the coral. 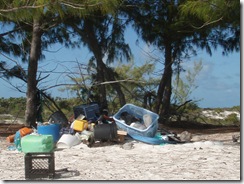 Trash is an issue throughout the Bahamas – and indeed the Dominican Republic, Puerto Rico and the rest of the Caribbean Islands. In addition to the refuse created by folks living their lives, we continually find plastic on the beaches. A lot of plastic. Cruisers will often pick it up and place it in one or two piles with the hope that some official will send a crew to remove it. Here’s a pile from a beach on the Atlantic side of Shroud Cay.

I’m not sure how we (the global we) fix this. I’m more certain that changes must occur. Every beach has tubs, flip-flops, nets, tanks, buckets, and crates. Every beach. 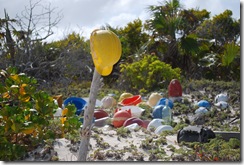 On the beach at Conception Cay a special shipment had washed ashore.  Somewhere there are construction workers who don’t have their hard hats. This photo is by Eleanor Marriot from S/V Amandla 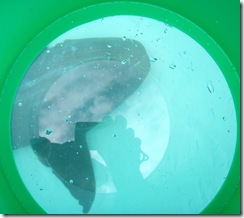 Have we seen sharks? I’m glad you asked. Back in Highbourne Cay there is a small and lush marina that caters mainly to power yachts. They have a dock that juts high off the water at the entrance to the marina, and have installed a fish cleaning station at the end of the dock. The result is that you navigate your inflatable dinghy in over nine or ten of these:

Aimee from S/V Crow’s Nest and Pam from S/V Zephia were the first to tell us about the rather large nurse sharks at Highbourne. Aimee is fascinated by sharks, and we had a few discussions about them. EW had a laid-back attitude about the sharks and found an article about shark attacks in the Bahamas. He told us, “You only really have to worry if you get between a shark and food. These guys were bit when they had a bloody fish on a spear gun. We have nothing to worry about.” Remember this remark. I’ve snorkeled with a curious barracuda and ignored  him quite successfully. I’m not sure how I’d feel swimming near a real shark and prefer not to. 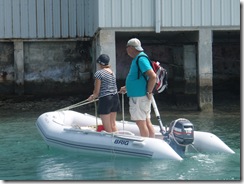 In Georgetown, most boats anchor across the bay and dinghy over a mile to shore for wifi, groceries and supplies, and the library. This is a choppy bay and the ride can be wet. Folks who return to Georgetown year after year purchase a 14-16 foot boat for frequent trips. Folks like us with soft bottom inflatables get wet bottoms. Those with hard bottom inflatables stand up under way. While I’ve seen a few Maine fishermen stand up in their dories, I’ve never seen this many yachters stand up in a dinghy.

Here is the standard position for two people. Note that they both have a rope to hold on to.

Here they are, heading out under the bridge from the dinghy dock in Georgetown to the anchorage.

Note that this is a very narrow opening. The rule is that boats coming in have the right of way because they are often in heavy chop and have a current driving them into the lake area. I’ve seen one boat hold up five that are inside. In fact I’ve been that one boat.

We left Georgetown with S/V Amandla, heading to Conception Cay where we spent a number of days (whose counting?) enjoying their company and their cooking. Eleanor and I shared recipes, but she and Fabio are truly chefs, I’m just someone who can follow directions – usually. 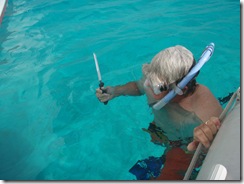 We had a bit of a problem when we anchored as EW had hauled the dinghy close to the boat in order to fish, but 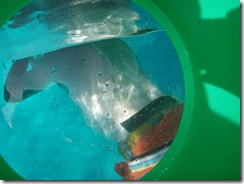 had not secured the dinghy rode as we usually do when we are anchoring and expect to go into reverse. You boaters already know what happened, we wound the extra dinghy line tightly around La Luna’s prop. This is not a good thing. Instead of getting out the rum and tapas as we had intended, EW put on his trunks for a dip over the side with a knife. While my job was to sit in the dinghy, assist EW, and hold the dinghy where he could grab onto it and rest, of course my personal  goal was to target this adventure.

I was sitting in the dinghy, watching EW and taking photos, when he burst out of the water and struggled to get into the dinghy, gasping, “Shark!” when he got the snorkel out of his mouth. I’m only a little ashamed to say that I laughed. His armchair attitude about sharks certainly changed when a 5 foot nurse shark joined him under the boat.

I stopped laughing when he told me he was going back in and that my job was to watch for the shark. That made both of us too nervous, so after two more attempts, EW decided to leave the warp around the prop for the night. The next morning he and Fabio cut it away with no help from the locals. That shark showed up under the boat around cocktail hour every night of our visit.

Finally, a taste of home. When our former neighbor, Laurel, and her adventurous niece dropped by our good bye 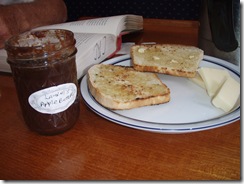 gathering in South Portland, Laurel brought a bag of goodies: home made relish, salsa, and apple butter. Oh my goodness. They have permanent mention in our provisioning list, except all but the green relish is marked with a zero. They were delicious. I felt the apple butter was definitely worthy of a photo on the blog. Here is the jar, with my homemade bread, toasted, and cheddar cheese, a Maine breakfast of champions. Thank you Laurel!  Hugs to you.