In 2009 I had the distinct pleasure of officiating the wedding of my honorary niece, Chrissy and her husband Gordon. It is truly one of the highlights of my life. Knowing that we were taking off soon, Chrissy and her mom wanted to provide a gift that would work well on the boat, so they purchased an L.L. Bean bag with a zip top. labeled Officiant in a color a few people call “Barbie Blue”

The Officiant bag is well traveled, so I decided to provide a photo of it’s journey from country to country. This post will be updated frequently. 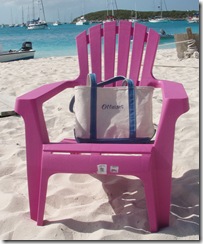 Since Chrissy’s mom and I have had many discussions about blue and pink and she has threatened me with fuschia, it seemed appropriate to kick off the Officiant Bag’s post with a fuschia chair at Volley Ball Beach in Georgetown. 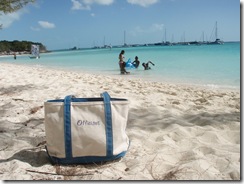 Farther down the beach, we found local and cruising kids enjoying the water and the beach, while we enjoyed the view. 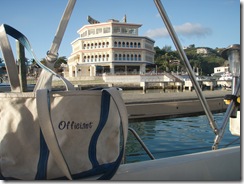 At Ocean World Marina, the Officiant Bag perched in the cockpit as we viewed the hotel and casino ashore. 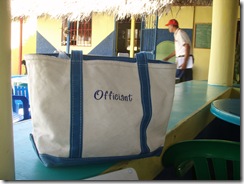 In Luperon, the Officiant Bag joined me at JR’s bar and grill during one of the few times I only had diet cola in Luperon. 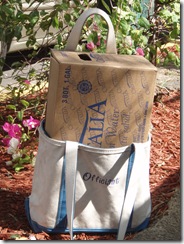 We put the Officiant Bag to work, toting a carton that held three gallons of water. Good bag.  Note that I again found fuschia for the backdrop.

So glad to see the Officiant bag being put to good use. The "barbie blue" looks great with pink!
Kathy