One of our greatest joys in this new journey is meeting people and making new friends of both other cruisers and locals. Recently we were invited to join Anna’s family for two mid-day meals. I hope we showed proper appreciation as we ate very well and had a wonderful time.

It begins with Tony. Tony is a gay 30-something from Luperon who says he speaks 7 languages (I’ve heard  Spanish, English, and German, so have no reason to doubt him). He works as a tour guide for the nearby resort and appears to have not other employment. This is a down year for the resort, so he may only be required to work one or two days a week. We met Tony at a local seafood restaurant and shop when we stopped in to purchase fish to cook aboard. (Read Mr. Romance.. to find out why I have to buy fish.)

Tony was visiting in the restaurant and translated for us. We chatted. Frankly I'd been surprised and pleased that he and a few other gay men we’ve seen seem to be accepted and respected in Luperon.  We chatted, thanked him and went off to La Luna. 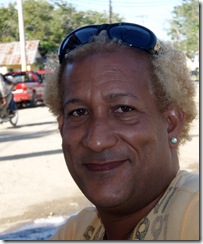 On Saturday morning, we had a “mission” to stop at the ATM, the grocery store, the hardware store and the pharmacy. Along the

way we ran into Tony. Hugs and kisses. In Luperon, I am Bar-bar-Ah. Bar-Brua (or however one writes my name phonetically) is impossible for them. It sounds so celebratory to hear Tony call out to me -- “Bar-Bar-Ah! How are you?” Tony asked what we are doing and said, “I will translate for you at the pharmacy". Then he accompanied us to the hardware store and showed us the new Catholic church, the location of the Tuesday farmer’s market, and more. 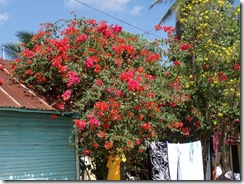 The Colors of Luperon 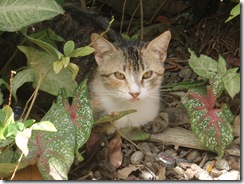 As we wandered the town with Tony he led us to his cousin’s house, and introduced us to Anna and her family. 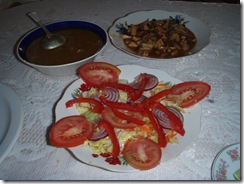 Deanna who is 18. Her husband died three years ago. Her mother lives nearby and her mother-in-law lives in the country and visits often. Late Saturday morning Anna and her gentleman friend (P., a Navy guy with an incredible smile) were creating a meal and invited us to stay. We demurred. They insisted in Spanish. Tony insisted in English and suggested we go get some rum to share, so he and EW went off for a bottle of rum, Cokes and limes, and I watched Anna and P. cook. Her kitchen is tiny and clean, and they deftly worked together, preparing Dominican beans, rice, eggplant, conch, and a salad.  I watched them cook, asked about the ingredients and techniques, and tasted the eggplant all in very broken English and Spanish. When EW and Tony returned, we all drank Cuba Libras. Everything was delicious but the eggplant and beans were amazing. 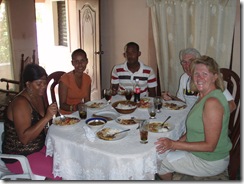 Here are Anna, Deanna, P., EW and me – enjoying a great meal.   There was a lot of conversation – though only Tony spoke English, he is very good at translating. We laughed, talked about raising sons and were scolded for not having Mo’s photo on our persons.

And we were invited to return on Monday, when Anna would cut my hair and they would feed us again. Again, we tried to decline. “No, that is too much!” They wouldn’t hear of it. I baked a bread, we brought beer and cokes, and maple syrup and three pairs of “Barefoot Sandals” (Footbling). We arrived at 10 as instructed and I watched them make the beans and the rice and prepare the chicken. I'll be able to recreate the barbeque sauce because I had purchased the major flavoring ingredient after our first visit.

Again, we had a wonderful meal. They thought the Barefoot Sandals were ridiculously funny. Deanna and Anna will wear them with other sandals; when we saw Tony on Tuesday he was wearing one of the pair on his wrist, looped over his finger. That works. (I knew he’d like it; he's a bling kind of guy.)

It’s hard for us to know how to show our appreciation. We don’t want to insult them, but don’t want to take without giving either. Anna is a strong, funny, amazing person – both EW and I were delighted to meet her and her family. We’ve told a number of the gringos about my haircut, and hope that they become her customers. We'll definitely visit them again when we are next in Luperon – perhaps we can have them to the boat and cook for them for a change.

Yeah! you wanted a haircut, no coincidence there Barb. Your needs are met. Great sharing.:)