NOTE: I attempted to post this while at sea via our SSB. For some reason, though the process had apparently worked once for the “My Prayer” post, only the title appeared on TypePad for this post and a few others. Here’s what you should have been able to read on March 7: 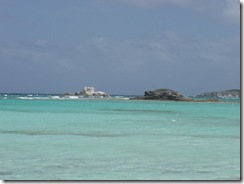 We are traveling from Conception Cay (beautiful!) to Mayaguana  Cay, making our way to the Dominican Republic. We raised the anchor shortly after 5 PM on Sunday, with the intent to make 5 knots per hour and arrive at Mayaguana on Tuesday morning. At 6:00 PM, the MaxSea navigation software told us we had 1 day and 14 hours to go. For the first 4 hours we had a lovely sail, southeast along the eastern side of Long Cay.

About an hour after the start of my 9 to midnight watch, the auto pilot died. Shortly after that the wind died. We have been motoring with one of us manning the helm ever since. I usually read and write while on watch. Many of my posts during the trip down from Maine started in my notebook. During the storm off of Cape Fear I was too afraid and watchful to be bored. This trip is boring. From 10:00 to midnight and from 3:00 to 6:00 AM, I steered the boat. There were very few boats, no land or coral heads to avoid, no radio traffic, no weather issues. For much of that I’m thankful, but bored.

During the night I wrote absolutely wonderful posts for this blog – all in my head and I’m sure the reality of the written word will not compare to my thoughts under the stars. In the early morning hours I sang – softly so as not to awake (or scare) EW, who was asleep on the settee. It seems that the only songs I know all the words to are from Camp Natarswi, a two-week Girl Scout camp in Millinocket Maine. I only attended for two years, but spent the next 4 years teaching the songs to my younger nieces and nephews from Baltimore. I’m particularly familiar with “The Bear Song”, much loved by the three youngest boys, who are now a Police Detective, a Master Chief in the Coast Guard, and a Chef, respectively; and with “My Rose She Died” which was sung in an appalling hillbilly accent, much enjoyed by one of their older sisters who loved hamming up the accent. She’s a physician’s assistant, now, so none of them appeared to have been harmed by my singing.  Fortunately for EW, he slept through my whole repertoire last night. 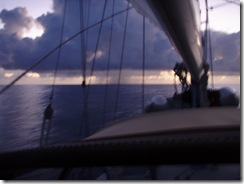 As the night progressed and the sky lightened prior to dawn, I amused myself by watching amazing cloud formations. They would form on the horizon and appear as towering shapes with a straight bottom line. Often, the looked like giant gates and I imagined sailing through them to new worlds. (I’m re-reading Tolkien’s trilogy – can you tell?) At other times I saw an elephant, a camel, Goofy, and a bear diving into water, cartoon fashion and wearing a big grin.

When EW came on deck at 6:00 I prepared tea and coffee and cereal and checked into Chris Parker’s weather net on the SSB. 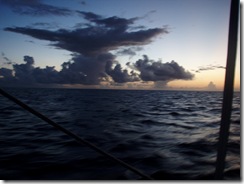 Then, I slept. The seas are so calm that I perfected reading while driving during my last watch. The three hours between noon and three I’m preparing our big meal and writing and sending this and checking my SSB email.  Yes, this post and the one posted yesterday were delivered to Harts At Sea via email on through the SSB and Pactor modem. The system works beautifully and I promise to write a post detailing the final steps in this very long installation and trouble shooting process. (Well, the SSB and Pactor work great. Still have bugs regarding posting to the blog.)

I haven’t yet figured out how to tell Typepad to announce all my posts on Facebook and Twitter. If you find this, please feel free to spread the word. We are once again at sea, we are fine, and – except for being bored, all is well. (Hope you didn’t announce on Facebook and Twitter that I posted 3 or 4 blanks. So embarrassing. At least this way you get the photos with the posts.)