Home Archives Profile Subscribe
Bling On Board
EW, A Good Sport and A Great Topic

Mr. Romance is Not a Hunter-Gatherer

I love EW. Truly and with all my heart. He will attempt to fix nearly anything on board and is successful most of the time. But I have never seen him land a fish. 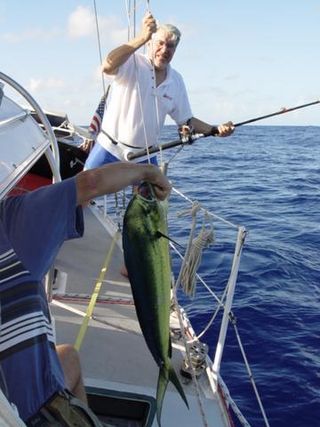 He landed one when he crossed the Atlantic with Chuck and Diane. Here's the photo. It gave me hope. I believed with all my heart that EW would follow the thousands of other cruisers who have gone before and provide for us from the sea’s bounty. I was ready. I purchased rice for sticky rice and sushi and limes for seveche. I collected seafood recipes and made sure I had stocked up on the normal necessary ingredients. I read articles and books by other sailors – about how they never used the canned meats they’d packed because they caught so much seafood. I believed.

Prior to leaving Maine, EW got gear. He wanted a chest harness so he could fight the big ones, but I suggested 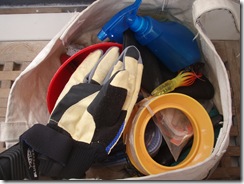 we should start a bit smaller. He got a “yo-yo” rig, gloves, lures, a gaff, and filled one of my spray bottles with cheap booze for a humane kill. (Evidently one squirts rotgut into the fish’s gills and they die immediately. No muss, no fuss, no fish flopping all over deck and cockpit. He put his gear into a large tote and called it his “Fish Fear Me Bag”. Really.

He started fishing when we left Maine on October 18th. Nothing.

From October to March, not one fish took his line. We would buddy boat with other sailors in the Bahamas and hear about the fish they caught. We’d listen in on radio conversations and hear, “Fish on! Can’t talk now!”  We’d meet cruisers who had traveled the same track we had on the same day and caught a nice mahi-mahi or sea bass.

Furthermore, we went conching with cruisers who had easily harvested conch in thigh high water throughout the Berry Islands. Nothing. On another memorable day in the Exumas we went in search of conch and lobster with Dave and Aimee from Crow’s Nest. EW (and I) can’t dive very deep. I’m not that good a swimmer and EW can’t clear his ears – so I’m not complaining that EW didn’t get a conch in 12 feet of water. That’s above and beyond, in my opinion and Amiee and Dave did share their catch. EW helped them clean it and I cooked dinner. When the three of them took dinghies in to shore for the cleaning of the conch, I stayed on La Luna. Aimee used her noodle and goggles to swim ashore – and caught 3 conch in 3 feet of water. EW blithely motored over their bed and didn’t harvest anything. Apparently live seafood doesn’t speak to him.

Cleaning conch is icky and hard and it turns out we aren’t in love with it so I voluntarily withdrew all requests for conch. On Valentine’s Day in Georgetown, I bought lobster tails from the hair salon (I love that!) and made a wonderful dinner using a recipe from  An Embarrassment of Mangoes by Ann Vanderhoof. Perfect.  Ann and her husband, Steve,  traveled from Eastern Canada to Grenada. He fished all the way – even learned how to toss a shrimp net. After two years they returned to Canada with all canned protein on board and untouched.  He speared fish, he lassoed lobster, he found conch, and on the way home he caught fish. Lots of fish. (While in the islands they bought fish, listening for the conch horn to let folks know when a fresh catch was in. I’m not in the right islands for that.)

Ann didn’t talk a lot about fishing off the boat until near the end of the book in a chapter entitled “Beautiful Babe Spit”. (That is not a typo.) They were returning north and competing in a fishing contest with a buddy boat. Ann and Steve were well back on the fishing points scale, when they stopped in at Culebra to meet up again with Cleo. …”a courtly man with the look of a longtime sailor. Lithe, attentive, with laughing eyes --- a real ladies’ man, my mother would have said –- white haired and well-read.” Over dinner Cleo described how he had taken a Grenadian girl fishing and had “explained the secret of successful fishing to her. If a pretty lady spits on the lure before it goes into the water, she will almost certainly catch a fish.”

That tickled me and you will have to read the book to see the results, but let’s just say that Ann’s wise and romantic husband assured his wife she was beautiful and asked her to spit on the lure for the remainder of the trip. It worked very well.

I read this to EW early in our voyage. He chuckled. He caught no fish. He talked with people about lures; he let out more line; he let out less line; he fished at different depths and speeds. He fished from Maine to the Turks and Caicos and never caught a fish and never --- not once --- asked his wife to spit on the lure. Mo will read this before we tell him the story, and right now he is thinking, “Way to go, Dad. Mr. Romance strikes, again.” Or something like that. EW is not always quick on the romance uptake. So, a couple of months into the trip, I mention the “Beautiful Babe Spit” and he looked appropriately chagrined – but still, never once asked me to anoint his lure.

Until last week. We were on our way to the Dominican Republic and I had suggested with a bit of attitude that it was “too damn bad that he didn’t have a beautiful wife” to anoint his lure. Finally – five months after leaving 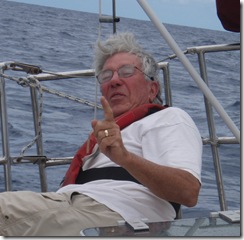 Maine he got it. Now, it must be said that then he had a momentary relapse. He took his “Fish Fear Me Bag” to the aft deck and started getting things ready, saying he’d call me when it was time. A few minutes later I saw him paying out the line. “You ready?” I asked sweetly. “Oh, yes!  Just getting the lure wet!” He said as he rapidly reeled it back in. After I stopped laughing, I went aft, created a mouthful of saliva and spit on the lure and hook. He called me his beautiful bride and we both went back to the cockpit.

The photo at left is EW stating that he was just getting the line wet. Right. He was laughing so hard he couldn’t form the words.

About two hours later, I looked aft and said, “I think you have a fish!” He did. A beautiful mahi-mahi, probably about three pounds. He reeled it in and I got the camera and the gaff. Then we made a fatal error for which I share the responsibility.  As he lifted the fish out of the water, he said, “Get a photo!” not “Get the Gaff!” I complied and we lost the fish – and didn’t get the photo.

We’ve only had a very short opportunity since, sailing close to shore on the way to Luperon, but you can bet he remembered to call me beautiful and ask me to spit.

Posted at 08:09 AM in Galley Tips and Recipes, Relationships at Sea | Permalink | Comments (1)

Oh my! I am laughing, I love the fishing story, spit away beautiful Barb! I sure hope he catches another one and then some.