Close Encounters of the Nautical Kind

We left Conception Cay in the Bahamas on March 6 and began to travel south and east, with the goal of reaching Luperon in the Dominican Republic as quickly as possible. The first leg of the journey was an overnight trip to Abraham Bay off Mayaguana. We left at night so we would arrive there in the morning after a 36 hour sail. From Mayaguana we planned to stop at Turks and Caicos, because we didn’t think the wind would allow us to continue straight to the D.R. It isn’t supposed to, but for some reason we lucked out and were able to sail directly to the D.R, arriving at Ocean Marina in the early morning of March 11.

During each hop, from Conception to Mayaguana and from Mayaguana to the D.R., we experienced the best kind of encounters at sea, both of them on my watch.

First Close Encounter of the Nautical Kind, the Ruby Princess. When we left Conception we sailed south, then east, then south again toward Mayaguana. Well, actually we motored a lot, but later were able to sail. We were sailing during my 9:00 to midnight watch northeast of Mayaguana when I spotted lights from a large vessel apparently heading our way. At sea, you rely on your radar and the other boat’s navigation lights. Generally (to keep is simple and not discuss boats towing barges, boats fishing, etc.) white lights are supposed to be seen from 360 degrees, green lights shine on the starboard side of a boat and red on the port. So if you see a boat and and white and green lights, chances are they will pass you to their starboard side. If you see a lot of white lights and both red and green the boat is coming toward you or going away from you. (If you’re heading into a city with cars headlights and streetlights .. well, don’t get me started.)

So I saw white lights. In fact what I saw were both white lights on a tanker. They have “range” lights, the white light on the bow is at certain height from their deck and the one on the stern is higher. If you see both lights you could be on a collision course. From that distance I couldn’t make out the red or green. I saw lots of white lights  and called EW up from a sound sleep. As you may recall, we had no auto pilot at this point so I wasn’t going to handle this one alone. EW checked the radar; the ship was nine miles out and closing in so he waited and checked the radar again and the ship was 8 miles out and closing in. He got on the radio and tried to hail the ship at that lat/long and heading north west. “We are the sailboat on your bow; we appear to be converging.”

He called again. And again. “We appear to be converging.”

Then we heard, “La Luna, this is the Ruby Princess. Would you repeat your lat/long?” EW did. The skipper/radio god from the Ruby Princess came back and told us the name of the vessel that was converging with us. EW called the vessel by name, then they saw and acknowledged us and turned to port. I saw green lights as they passed us on their starboard side. EW thanked the Ruby Princess and went back to bed. Commercial ocean going vessels (and some private yachts) broadcast the name and location of their boat via AIS, a newish technology. The Powers That Be prefer that private boats such as ours opt to purchase a unit that will only allow us to receive AIS signals so we know what boat is where.  We will probably get one because as we’ve seen, the radio guy doesn’t know he’s the boat heading such and such towards that sailboat. The radio guy does know that he is on ABC Tanker and must respond to a call. The Skipper of the Ruby Princess allowed us to make that call.

He was north of us and heading our way. About an hour later he showed up astern, made a sharp turn to the east and turned back south about a mile later. When he made the turn he flashed the lights on the lower decks. I think he winked at me. Nice guy.

We were under sail in 15 – 20 knots of wind, south of the Turks and Caicos, heading southeast to the D.R. I was on my 3:00 AM to 6:00 AM watch when I saw something out there just before dawn. I checked radar. (EW had fixed the auto pilot in Mayaguana, so I could leave the helm. I love EW.) Yep. Definitely a boat of the power variety. Not as large as a cruise ship or tanker and with no lights at all. None.

Hmmmm. I watched the boat. I checked radar. We were on a collision course, we were under sail and I didn’t want to change course unless I had to. I got out a flashlight and shined it on the sails as bright lights on white sail can really catch a boater’s attention.  Nothing. In that area I didn’t believe this was a pirate or boat thug situation, I just assumed some fisherman was waiting for dawn and saving power. I woke up EW.

He checked the radar and just started to get on the radio, when the vessel in question lit up with white and red (we saw their port side) and flashing blue lights. Authorities. A young American hailed us, letting us know they were a  U.S. Coast vessel. Cool. He asked us a lot of questions such as the name of our vessel. EW spelled out La Luna using the NATO phonetic alphabet. We had realized that was the standard, particularly when traveling in foreign countries, so I had posted it by the radio. “Lima Alpha Lima Uniform November Alpha",”  EW crisply replied, then gave our radio call sign and our documentation number. ( I know the first, not the second.) They asked where we were from, our last port of call, and where we were going. They asked our names and birthdates. EW replied in perfect nautical fashion until after giving first his birthday then mine, said, “Some people think I should have adopted her.” Radio silence, then. “Captain, you have made our watch!”

They wished us a good sail and let us know we could call on them we we had a problem. Afterward, with EW’s permission, I called them back to let them know I had nephews in the Coast Guard. They didn’t know Brian or Patrick, but we certainly have friends down here. They made my watch, too.

Sunrise before landing in the Dominican Republic. 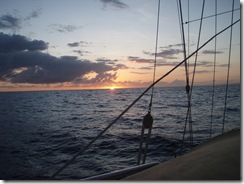 NOTE: This post has been edited, thanks to the quick eye of Ken Hurst. I had written Luna Alpha Luna Uniform November Alpha. Wouldn't it be cool if our boat's name was the NATO spelling word? Not so. The correct word is Lima and EW was totally correct. Thanks, Ken.

So Barb, I guess when you and/or EW spelled out your ship's name and said Luna instead Lima for the letter L the Coast Guard just figured it was the Mainah accents? :) I guess that was just a Freudian typo.

Thanks, Ken! Darn it! EW spoke correctly. I had a blond moment. You'll like our boat cards, too. The first batch all said "Snailmail" for Sailmail.