I Went Up the Backstay. Way Up

EW has been focused on getting the Single Side Band (SSB) radio up and running. Here’s the synopsis:

1. While still in Maine, we purchased the SSB, a Pactor Modem, and a new GPS (thanks, Huffs for the GPS)  and EW installed the copper ground plane, the tuner, and ran the antenna wire.

2. We stored the rest of the stuff in boxes aboard La Luna, and left Maine.

3. EW planed the next stages and put together a parts list. We (mostly I) made many, many trips to West Marine in Hampton Virginia and Fort Lauderdale for this and other projects. While in Hampton, EW paid a marine electronics specialist to wire a special cable. On one of my trips to town in Fort Lauderdale, EW had me purchase three connectors for this project and he put them in a safe place.

4. In the Bahamas it quickly became apparent that we needed the SSB to get reliable weather – it was either that or rely on the kindness of strangers to tell us the weather after they listened to Chris Parker.  So, once we were safely anchored in Devil’s Cay, EW took a day to install the system.

5. He worked hard and got a lot done, but couldn’t find the connectors. I had gone to shore to patch and clean the dinghy and when I returned instead of finding a smiling husband and a working radio, I found a raving man, who was tearing the boat apart. I helped. We searched for 4 hours. No connectors. We spent the next few days enjoying the Berry Islands and hoping that if he relaxed the safe location would come to him. No dice. We sailed to Nassau.

6. Once in Nassau, we searched the island for two days for this connector, once on foot and then with Bahama John, Taxi Driver. John used every contact and took EW to every possible store until they found a guy who had one of these things left over from a previous job. We bought it and we paid Bahama John for three hours of extraordinary service.

7. EW works diligently to solder this part in place in a choppy bouncy anchorage.

9. We talked with neighboring boats and read the manual and discovered that one problem may be our backstay.  See, in this installation the backstay becomes the antenna. The wire antenna goes from the boat up the backstay about 6-8  feet or so to an insulator. Thirty-seven feet above that is another insulator. The antenna is the space between those insulators and that space is “sacred”. We had two items attached to that space with metal clamps and everyone agreed they had to come down.

So I went up the backstay. High up.

On a quiet morning in Rose Island, EW got out the boatswain’s chair, tools, and two short lines we made up with snap shackles. See, the backstay goes from the stern of the boat up to the mast at an angle. The halyard used to raise me up goes straight down from the mast, so I had to attach myself to the backstay in order to work on it. I had to get above other items, such as the first insulator, so had to shackle in above an item, remove the shackle below and have EW haul me for three feet before I had to move the shackles again.

Did I say I went way up? 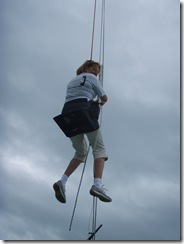 I removed the clamps for the man overboard pole and we found a new location for that.  This photo is at the lower work area, where I was about 13 or 14 feet above the deck.

Then I went way up and removed the flag halyard. Here I am. Way up. 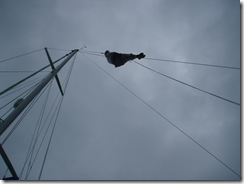 It was fine. I wasn’t scared and waved to the nearby boaters who were having their morning coffee while watching the show. No problem.

As for the radio … more on that later!

Brave woman you are Barb. Shit I would have had to take some vallium just to do that. Enjoying reading all about your adventures. Darleen xoxox