I like to walk and am my best when I walk 15 to 20 miles a week.  In South Portland I walked with my dog, and with a boating neighbor. The dog was silent. The neighbor and I would walk and talk and keep up a fast pace. It was exercise.

While EW and I did a lot of walking in Nassau, many of the islands we visited in the Exumas did not have roads or paths that allowed 3 or 4 mile walks.  My need to find alternative ways to get in shape has provided me with a few adventures, and opportunities for growth.  I’ve done yoga on my own with a book twice so far, once on a dock ashore and once on the deck of La Luna during 15-20 knots of wind. Many balance poses weren’t possible aboard the boat, but that was OK because non- 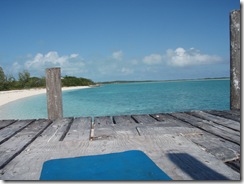 balance poses became balance poses on deck. It was a good work out.  On Norman’s Cay, a empty dock provided a wonderful yoga space. Here’s the view from my mat. Note the deck had been repaired with plywood, just the right size for a yoga spot. Sweet!

EW and I also went for a walk along the road at Norman’s Cay. We checked out the airport, and walked part way around the bay. A couple of weeks later we went on a trek at Black Point. This became a three hour hike through brush and mangrove swamp and was a great work-out. It’s also a story to be told in a subsequent post. Tune in later.

Of course we’ve gone snorkeling at many of the islands. At Shroud Cay, we circled a rocky point, moving lazily through the water for over an hour. It wasn’t aerobic.  At Staniel Cay we tied the dinghy to the dinghy buoy and swam into Thunderball Grotto. Lovely. Magical, Amazing fish. We were moving, but the only real exercise is getting back into the dinghy from the water. That required a lot of thrashing and splashing. It was not pretty. 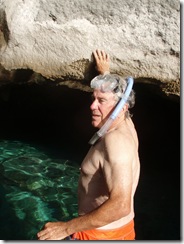 Here is EW standing in the grotto. There are holes that allow light inside – and one over a deep spot allows brave and foolish types to jump in from the top. No thank you very much. 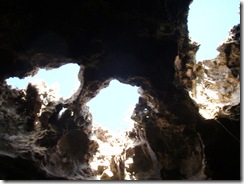 Here are the three islets at Staniel Cay. The middle one is Thunderball Grotto. Like Tom Cruise and many other actors, it appears bigger in the movies. 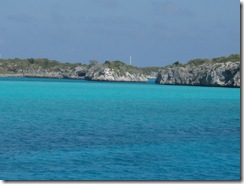 We anchored straight out from Thunderball – left of the view here.

We need a second “vehicle” in that it would be handy to have another method of transportation so that when one of us has the dinghy, the other can go visiting or to the beach. One option would be a sit-on-top kayak. Our friends on Bear have one and we tried it out when we visited them in Panama. That was a two person kayak, but one person can certainly handle it.  Two can fish from it; you can take things to shore for a cookout; and you can paddle around the anchorage and give your upper body a work out.

We’re thinking about getting a sit-on-top two-person kayak – but don’t know where on deck we would store it.

In Fort Lauderdale we saw a number of younger folk paddling down the river on a paddle board. That looked interesting, so when Dave from S/V Crow’s Nest paddled by us at Staniel, I asked him whether I could try out his board. Dave is younger and in much better shape. Some of his friends (and I think he ) have paddled white water rivers on a paddle board instead of a canoe. I can’t imagine that.

I could imagine myself on the paddle board, but it isn’t as easy as it looks. Here I am starting out. 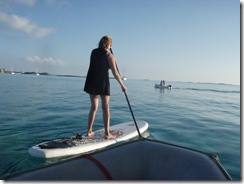 If this were a video, you’d see that I wobbled. A lot. Note that I had my head down looking at the board and the water and the sand and fish below. I also had a hard time figuring out how to turn. (J-Stroke, like a canoe – duh.)

In case you think I’m exaggerating my ineptness, as I went farther from Crow’s Nest a neighbor on S/V Wings called out, “Don’t worry. If you fall we’ll rescue you!”  That was much appreciated as I’d already scoped out that their swim ladder was down and decided that if I fell, I was towing the board to their boat. I didn’t fall. It was a miracle.

After about 15 minutes, my yoga training kicked in. (Get me – two classes and I’m an expert!) It finally occurred to me that my balance would be better if I focused outward. (How Zen.)

Once I started looking up and out, it became much easier, and I could actually turn, paddle and smile, all at once. 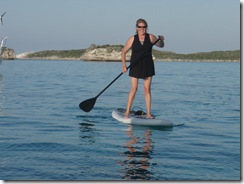 This is an inflatable board, but it felt substantial and sturdy underfoot. It provides great balance and core exercise and I’d love to have one – though a kayak may be more practical. Dave said that the board and paddle cost around $1400.00. When I checked on line I found the Sea Eagle Delux – a Paddle Board with a Seat  and this Boardworks Shabu. Both are just under $1000.00 so I wonder if any of the $300 - $500 inflatable boards would work.

The first morning on anchor near Hamburger Beach in Georgetown, I went for a half-hour row in our inflatable dinghy. That provided excellent exercise and a lot of comments from other boaters. The women all asked, “Are you rowing for the exercise?” The men all asked if our motor had been stolen or was broken. Really. I’ve offered to host a morning dinghy row but no one has taken me up on it.

Most of you have realized that one excellent opportunity for exercise is missing in this discussion. Here I am in the land of 75 degree water and 80 degree and sunny days. Why aren’t I swimming for exercise? Well, I can’t swim that well. I can swim, but have never mastered the crawl and have never swum any distance in the ocean. So, this morning, I had my first Total Immersion swimming class. Now that is a workout – and I have a lot to learn.  The instructor provided a DVD to remind me of the ideal style, and EW has agreed to be my coach.  I’m going to practice this. It’s good exercise, and doesn’t cost a thing – but I’d still like a paddle board or a kayak.

Hey There Anchor Buddies , good to sea your still afloat and livin the life .

we have found what we were looking for in the Abacos , lovely settlements , wonderful people , gorgeous land and seascapes .

The weather has been super sweet till March roared in , been blowin since the 28th of Feb and will continue for a couple more days ...

Finally pulled into Marsh harbour to see what the story was .. and it is very busy here , with everything you want on your walking path .
went out today and bought a super cool directional antenna for the laptop and it works big time ...

went to a SUPER market and bought a LOT of food , and finally found a little toaster oven , yea !!!

been here for 2 days now and have fixed a bilge pump check valve malfunction and bought a new prop for the dink as the other was stolen at Man O War the only night we stayed , Oh well .
The Merc dealer had 1 , just 1 in stock ,got it

we are saying at the Marsh Harbour Marina as planned from many weeks of emails back and forth , we are getting a real real good deal ,
gonna rent a car and tour the mainland , ( Abaco ) . we will base here for at least 2 weeks , Hope town was so pretty .

I knew it would be crowded down there , everyone we talked to was goin ....