Changing Our Lives – What Attracts Us, Also Exasperates Us

In 26 years of married life, EW and I have only taken one real “road trip” vacation. We spent 9 days driving from Maine to North Carolina and back, visiting friends and family along the way. For the most part, he drove and I navigated. EW loves an adventure and is open to stopping at any interesting turn-out, vista, tourist trap, or museum. It was a delightful trip. I only had to say, “this looks interesting”, or in the case of the Chesapeake Bridge Tunnel -- “Stop! Turn right here!” and he would pull over and spend time sight-seeing. This is in such direct contrast from the men in my family who operate on “Huff Time” and “Getting There”, that I was charmed and delighted. Ten or so years into our married life I discovered how fun EW’s sense of adventure  can be and how it provides us with offbeat adventures and stories to tell.

As much as I appreciate his willingness to stop to see the sights, I often get exasperated when he takes detours, or changes his focus when we are moving forward in one direction.  I grew up on “Huff Time”, hate to be late, hate to feel as though I'm missing anything that others may be doing. and create arbitrary time constraints on our trips and adventures. It’s hard to have an adventure when you’re thinking about how long it’s going to take to bake the gingerbread for tonight’s dinner with friends --or it is for me, anyway. In proper perspective, my focus on time can be a good thing, but when that focus is on arbitrary shoulds and what ifs and what’s next instead of what is here and now I can be a pain in the butt.

On Shroud Cay we had an “adventure” instigated by EW that tried my patience and caused me to worry that we would be arrested by the park rangers. We’d gone ashore to a little beach from which we could take a path to the spring. Crews from four boats were ashore to visit the spring and take spring water bucket baths.  While most of us were chatting on the beach, EW began to explore, and saw an interesting (to him) plastic something protruding from the sand. He dug down a bit with his hands and determined the something was a pontoon. So EW, open to new adventures and curious as hell, took one of the oars off the dinghy and began to dig. And dig. I was oblivious for some time, chatting with the ladies and playing with the dogs. The other men were mildly interested in his quest but would never have undertaken his self-appointed task: to discover what type of boat this was and to dig it out.

When I finally realized what was going on, I was not very interested and only mildly amused. When he continued to dig as others took turns at the spring, I was mildly annoyed. He reminded me that, “This is all part of the adventure.” But I really wasn’t having any of that. He continued to dig. And dig. He discovered the other pontoon and a “Hobie” label and dug with more gusto. Evening was coming and I realized that if I wanted to get to the spring for a bath, I’d better participate, as we were not leaving the beach while there was daylight.  I was annoyed (and afraid of being arrested) but took a deep breath and reminded myself to be open to all potential new adventures. He said, that if the park rangers discovered us, he would say that we were voluntarily cleaning plastic off the beach. And he charmingly asserted that,  “This is all for you, Bubsie, you wanted a little boat.”

That did now sway me as I knew that if this boat was indeed viable, he wouldn’t let me keep it as it was too big 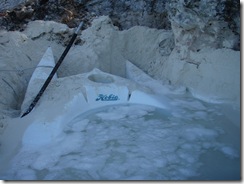 to stow on deck. But I grabbed the other oar and I dug. And dug. As the other couples came back from the spring, there was discussion of pulleys and ways to raise the boat up from the sand. Before it got dark, EW agreed to take a break until the next morning and we finally scrambled up the hill for our spring baths. I adopted the “if you can’t beat them join them” philosophy and finally truly got into the prospecting spirit, so the next morning, armed with our paddles and two block and tackle systems, we returned to shore and dug some more. Unfortunately, the morning tide was a higher high that week, and we soon found ourselves at the losing end of a race against the sea. When the two stern pontoons that had taken me an hour to uncover were totally buried by two waves, we knew  it was time to quit. This effort would required at least 4 people with real shovels during one session of afternoon low tide. EW realized the futility and gracefully gave up. We spent the next hour helping the tide return the beach to the state it had been before our efforts.

You know what? Once I accepted that my husband often chooses the path less taken, I had fun. We provided the other boaters with a story to tell, and made new boating friends. If I were more 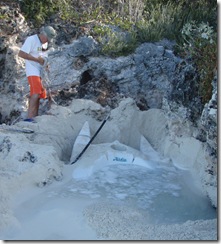 evolved, I’d have come to that conclusion much sooner and entered into the effort with better grace. There is a lesson here. I will work on remembering this during EW’s next spur of the moment adventure. After all, that’s what this trip is all about, our own personal adventure – not some arbitrary time table or “normal” experiences. I’m ready.

Has it occurred to you that digging is great exercise?