“You having any fun yet? You’re working too hard.”

On Sunday night we ate dinner at the Green Parrot, talked with cruisers and locals, and watched football.

On Monday, we visited the Ashram and took a two hour yoga class, and relaxed all afternoon. 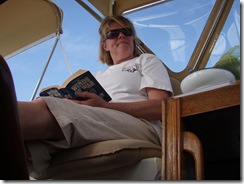 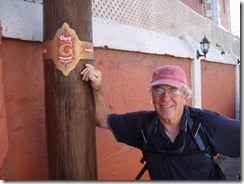 On Tuesday we went back to Nassau and played tourist. EW sought and found the cigar store at Grey Ledges – and purchased a cigar rolled on the premises.

We toured the local museum that is presenting an exhibit about slavery in the new world and celebrates the end of such slavery in 1888 when Brazil finally declared it illegal. A map showing when each area in the this hemisphere eliminated slavery indicates that the state of Vermont was the first to take that step, 1777. Good for them. 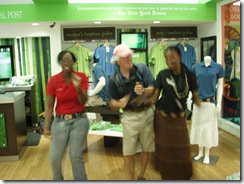 We visited some of the shops (here EW is dancing with the store clerks who were singing along with a CD) and ate a light lunch out at the  Hard Rock Cafe (EW’s choice. He likes to look at the guitars.)

Upon our return to the boat, one of our neighbors scooted over in the dinghy and invited us to happy hour on their boat.

This is the first time we have been on someone else’s boat at anchor for food and drink since we left Maine.

Now we are cruisers.

Sandra and Paul, aboard S/V Quarterdeck and their other guests, Bob and Linda from S/V Lucky Bird are both heading back to Florida. Really. Sandra and Paul have cruised the world for over 20 years. They completed one circumnavigation and spent years in the Caribbean, Thailand, and Australia and the Pacific. Oh my goodness. We bow to them. They are returning home to aid elderly parents and expect to sell their boat.

Alice and Bob flew home to Illinois this past hurricane season, leaving their boat on the hard in Antigua. While home, they helped plan their daughter’s wedding in March. They hope to take the boat to Maine later this year. 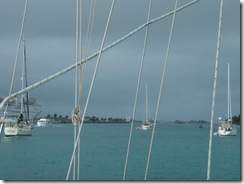 We had a wonderful time. Laughed, told stories and learned a lot. On Wednesday, as I write this Bob and Sandra plan to join EW and me for a walk to the botanical gardens in Nassau. We’ll get provisions and get on-line while we are ashore.

Here are our neighbors’ boats: Quarter Deck, Crow’s Nest and Lucky Bird – with a cruise ship on the dock across the harbor.

On Thursday morning, La Luna will head for Rose Cay, east of Nassau and on Friday we will finally make our way through the coral heads in the yellow passage. (La Luna will touch nothing but water.) We are going cruising.

We have one adjustment to make to the backstay in order to get the SSB working properly. Once that happens, the next update will have no photos as it will be emailed through SailMail.  Those of you who have that address will be able to email us (no photos, no replies) and we will be able to respond to you the next day.

Now, we are cruisers.

So happy to hear you are cruising and having fun. Keep enjoying your new lifestyle!
Kathy

Barb - Congrats to you - Wishing you safe passage and many blessings and adventures on the way!
Susan

Thanks for the pics. Cruising looks good on you!