The People of Nassau and the Food of La Luna

EW and I are both outgoing (no surprise to most of you) and one of the things I look forward to is meeting local people wherever we travel. We have agreed that in most cases we will greet those we meet on the street, offer a smile and a greeting and see who we meet.

I love listening to the voices of the Bahamas. Black or white, all natives speak with a lilt and a charming accent. Sometimes it takes a few seconds (or minutes) to understand the intent of their message, but we love talking with them. Almost every person we’ve met has been warm, pleasant, and welcoming. Many have been very helpful.

We’ve found that “Good morning” “Good afternoon” is usually followed quickly by “How are you?” So we do the same thing and listen to the answers. Many folk have been pleasantly surprised at our overtures and have stopped to chat. The security guard at the Green Parrot took a little warmer to warm up to us. Now he teases us about doing too much work in paradise.

I agree with him and am hopeful that after a few tasks this morning, EW will agree to play a bit this afternoon. We can work on the boat on Sunday when most things are closed, and leave Nassau on Monday for the Exumas.

In two weeks, we’ve done a lot of walking to marine stores, computer stores, electronics stores – well, you get the idea. We’ve only been approached by one pan-handler, though we have talked with a few folks who clearly have issues. The first time I did laundry in Nassau, Tony engaged with me at the laundry matt while our clothes were drying. I suspect the use of the facilities were free to him and I know he had gone to the Salvation Army HQ nearby and returned with lunch wrapped in foil. Tony told me he was a prophet. “You believe dat?” he asked. I assured him that I believed him.

“What chu reading?” I was reading Sailing in a Spoonful of Water by Joe Coomer.

“A book about sailing,” I said.

A photo of Joe Coomer’s wooden boat under sail adorned the cover of my book. I do believe he knew that.

This morning i made a second trip to the laundry mat and as I toted the bag through the Green Parrot, I stopped to talk with the chefs. When we ate there last week I had conch fritters and “peas ‘n rice”. Peas ‘n rice is a Bahamian dish made with rice and pigeon or black eyed peas. I could have eaten the Green Parrot version for a week. Last night I made mine from a recipe found in Embarrassment of Mangoes. It was OK, but not as good as what the Green Parrot serves. Two chefs eagerly discussed what I had done and offered advice on what I had to do the next time. Can’t wait to try it. Wonder how often I can feed EW Peas ‘n Rice?

A few days ago, we stopped by Potter’s Way, a u-shaped road that  goes to and from  the cargo terminal. Along the road are local food kiosks and under the bridge you’ll find market stands. I went in search of peppers, mangoes, and papayas and was not disappointed. The stand we chose was owned by a lovely lady who was quiet at first and warmed up to us.

“How hot are those peppers,” I asked, pointed to a mound of tiny green and orange and yellow globes.

“Mmmm. Dey hot peppas,” she said, clearly not sure how hot was hot in our kitchen.

She laughed and I purchased a couple of handfuls.

That night I made a macaroni and cheese dish that is in a Mexican vegetarian cookbook I’ve found very useful. I diced up three of the peppers and realized after I scratched my nose (I know, I know) and my face burned that hot here was not hot in Maine. So I pulled out a sliver of each of the colors and handed them to EW on a spoon.

“Try each of these, honey and tell me which one is the hottest and which is the mildest.” He did.

There is no mildest. I got EW another beer and removed 2/3 of the diced peppers from the recipe. It was still a hot meal – but we both loved it.

Last Sunday, we took a day to sight see and thought at first we had chosen the wrong day. Most stores and all museums are closed on Sundays here. Since there was a cruise ship in port, many of the shops near the terminal were open. As we were walking past a courtyard, EW spotted something, turned abruptly and said, “Come on! We gotta check this out!”  The courtyard brought us to the street one block over, as we passed through there was a small bar and a number of uniformed men enjoying a beer. They wore white dress uniforms and pith helmets and that is the sight that caught EW’s attention.

On the next street we saw more and more men and women in various styles of dress uniform, and talked with lady who told us it was the yearly “Church Parade” day. At first I thought she meant that all the churches got together for some sort of ecumenical event, but this is actually a day when the police and justice system march to and from a church service. When we arrived, the service was being conducted in the state Anglican church, but the majority of the marching participants were waiting to begin a five mile parade throughout the city. Some were eating ice cream, the gentlemen who first caught EW’s eye were having a beer. Others were just chatting and posing for photos.

When the parade started, we watched with a small family, and the dad was delighted to tell us what each division was and to point out the chief of police, the prosecutors (in robes and wigs), and the father and son drum majors.  Few other visitors witnessed the parade. It’s the kind of moment we hope to share all over the world. 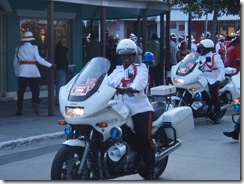 This motorcycle cop was a delightful woman . Moms and daughters who watched the parade were delighted to see her in front. There are a lot of strong, accomplished  women in the Bahamas. 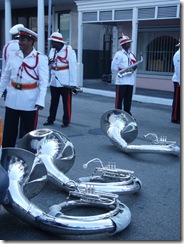 Before the parade, I chatted with one of the trumpet players in the band. He said most of the band are auxiliary policemen. He teaches music at an area high school. The tuba players waited here having taken “parade rest” seriously. 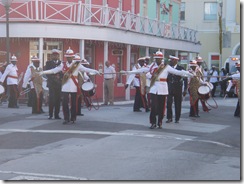 The drum majors are father and son. The leopard cloaks denote their regiment. A couple on a cruse from Alberta talked with us and posed with this group as the gentleman had served in the same regiment in Canada. I’m not sure how army regiments get translated to local police departments, but there you have it.

Post script:  As usual, when I published this on TypePad I checked off some categories for later searches. It occurred to me that each time I enter something in the "Galley Tips and Recipe" category, it also falls under "Humor". Take that as a warning.

Barb, Mike and I are so enjoying your blogs. Coincidentally, Mike and I will be in the Bahamas for a conference from Feb. 1-5. We will be staying at the Atlantis Resort. If you are still around, maybe we could meet for lunch????? It's 6 degrees out right now.....looking forward to sun!!!

Have you heard of the CD called Cape Dory? Sounds like you two in a way! Looks like you are having a wonderful time --