Playing in the Berry Islands

As most of you know, we left Maine on October 18, 2010 and spent the next 2 plus months delivering La Luna to the Bahamas. We had fun along the way and we did some sight-seeing, but weather windows, and deadlines were always on our minds.

On Christmas Day we motored in nearly flat calm to Bimini and a week later we landed (with a bang) in the Berry Islands. Once we got over the trauma of the grounding and the fear that we would not escape the anchorage (I was beginning to plan a floating B & B) we had some wonderful days living the cruising lifestyle.

Cruising is very different from delivering.

Our anchorage was quite protected with islands to the east and northeast and northwest and very shallow areas to the west and south. We were anchored in 9 to 15 feet of water, well dug into sand, and felt safe leaving La Luna and going exploring.

EW took this photo from the top of the mast. Now that’s the kind of water we have been waiting for! 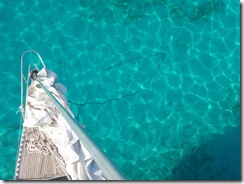 One day we took an extended dingy ride to Flo’s Conch Shack, where we met the owner, Chester Darville. Chester and his family have lived on Little Harbor Cay for generations and his father had dreamed of a boat-up restaurant. Chester had actually obtained a license in the early 90’s but had not moved forward – until Hurricane Andrew destroyed most of the family homes on the island. As the back of the menu says,

“The experience of Andrew built a fire under him, and he decided that this was going to be the first day of the rest of his life, a new life, without procrastination. He would clean up the wreckage of the village, and build his "DREAM”, a bar and restaurant high up on a hill overlooking one of the prettiest and most picturesque harbours in the Bahamas.” 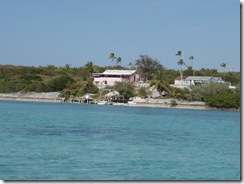 We didn’t get to sample the excellent Bahamian food at Flo’s, as one needs to call Chester on the radio and give him three hours notice. After all, you don’t just drive over or walk in to Flo’s as there is no community on the island. But we had a couple of beers, and added a dollar to the ceiling PHOTO3 and met Chester. Flo’s is primarily a conch shack – and they serve a lot of conch. These are mounds of conch shells. Both EW and I found them ominous. 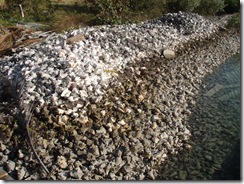 We’d navigated our way to the island using our newest technique – a photocopy of the appropriate page in the chart book. That way we aren’t exposing the expensive chart books to a dinghy ride but do have a method of navigating the rocks and channels. On the way over a very wide sandbar at low tide prevented us from taking the direct route, but Chester said we could probably go back that way, if we pulled the motor up and rowed some. EW decided to try it and we had a magical two hours getting back to La Luna via a slow boat.

When it became too shallow for the motor, EW pulled it up and found that the incoming tide provided just enough current in the right direction, allowing us to float to our anchorage. We relaxed, took in the sun, and began to notice the abundant fish life – starfish, silver hole-digging fish, rays, and even a small shark.  I was channeling Marlin Perkins from my youth and Mutual of Omaha’s Wild Kingdom; and I was intrigued with how the mangroves were encroaching on the ocean, sending shoots up 20 to 50 yards from shore. It was a wonderful afternoon. 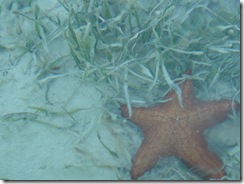 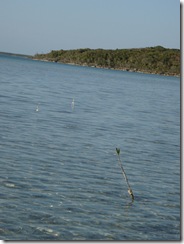 On two other days, alone and with the crews from S/V Choctaw Brave and S/V Bacon, we visited Hoffman’s Island and saw the spectacular Blue Hole. Reportedly over 60 feet deep, we imagine that the locals and adventuresome travelers dive from the rocks for a swim. None of us could figure out one would escape from the Blue Hole without getting cut up by coral or going through seriously slimy marine life. (Slimy equals gooky and I don’t do gooky.) 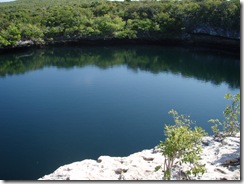 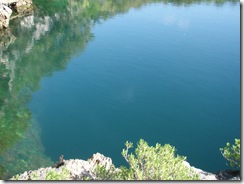 This Blue Hole is a short climb up from Hoffman’s Beach. Beautiful. 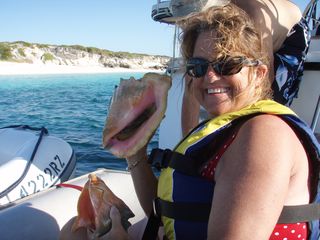 With the crews from the other boats, we relaxed on the beach, snorkeled and hunted for conch. Here's Linda with the only conch we didn't have to throw back. Since we only found one of legal size, so had a potluck on shore with excellent leftovers and a rice and beans and hot sausage dish. It was a wonderful day.

I can get into this.

NOTE: Regular readers will note that photos were not available for two recent posts. That has been fixed, so check cruise on back to recent posts and see the photos.

Hey there stew and barbara , hope all is well and that you are now connected , Ha ha, over......... all is well here , back in Bimini for the superbowl , much different atmosphere this time around over.......

smilin faces good cheer all around , being well taken care of here at big game .been tryin to fatten up , have lost all my fat , it's all good !!!