Home Archives Profile Subscribe
The People of Nassau and the Food of La Luna
We are Cruising!

Not really – But here’s a sentence I never thought I’d write:

On Tuesday morning, EW and I took a two hour yoga class. 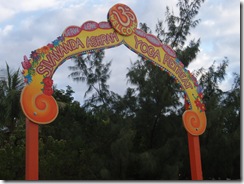 listening to chanting performances in the evening.  At the bar on Sunday, watching football, we talked with Amy and David from S/V Crow’s Nest. They had anchored near us specifically to visit the yoga center. Doesn’t everybody discuss yoga when watching football?)  Amy said that beginning yoga classes were available at 8 AM and 4 PM and that the cost was only $10.00 per person.

Now that we’re finally back in cruising mode with no major projects in the works,  EW and I decided to check it out.  I assumed the class for beginners for only ten dollars would be an hour long and hoped we could handle it. I have a yoga mat and the facility loaned one to EW, and told us to let the teacher know that this was our first class ever. We arranged our mats in the back  what we thought was the back of the class, but we were front and center when Arjuna, a senior Sivananda yoga teacher from Ottawa took his position. This center in the Bahamas is one of a number of International Sivananda Yoga Vedanta centers, and Arjuna has been teaching in these centers for over 20 years. He trained under the founder, Swami Vishnudevananda. Arjuna is a patient, kind man and an exceptional teacher. 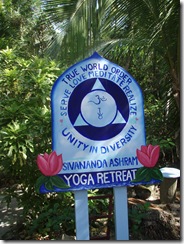 When we had talked with Dave and Amy the night before, EW had said, “But I can’t do the lotus position.” Amy laughed and said that it wasn’t at all required, particularly for a beginner’s class. Our instructor said it took him twenty years to be able to achieve the lotus position. That did not stop EW from immediately trying to stuff his feet into his hips. At least that is what it looked like. Arjuna reprimanded him mildly (with praise at EW’s willingness to work hard) and said that neither of us were to attempt lotus.

My apologies to Lynnelle and anyone else who tried to get me to do yoga. Oh my goodness. We both enjoyed it and certainly gained much out of the experience. This was a good workout, but not a work-out yoga class. They focus on inner peace, relaxation, and healing. It lasted two hours! This was the second of a beginners’ series that Arjuna was conducting this week. He very nicely caught us up on what had been presented on Monday and we gamely worked to relax and breath and stretch and achieve new positions. It was a wonderful workout. 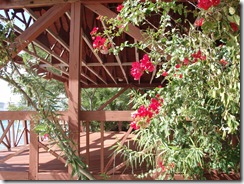 The photo at the right shows the deck on which we took our first yoga class. We faced the harbor to the left.

The facility offers lodging and vegetarian meals at a reasonable price – from $59.00 a day if you bring your own tent to $89.00 for a double room. There are two meals a day, and you can of course bring snacks but meat and eggs are not allowed in the facility. The center owns a section of Paradise Island that includes both shores, the southern shore on the bay where we are anchored, and the northern shore with a beautiful beach. 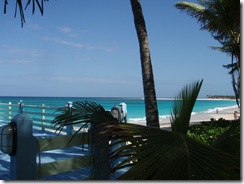 There are at least three yoga decks; the one to the left is the “Beach Deck”

As we were walking around the facility, EW said that this would be the type of “resort” he’d consider visiting.

The universe is curious and marvelous. At a discount store in Fort Lauderdale, EW had picked up a The Book of Yoga. It teaches the same principals as they do at the Sivananda Ashrams, and gives the same advice regarding the poses we are beginning to learn. I plan to encompass yoga on a regular basis, and take a class or two when one is available.

As Amy says, “It’s not just your boat engine you have to keep lubricated. You have to work on your own internal engine, too.”

Yes, I noticed their yoga center in the South of France looks lovely as well ...Hugs D&J

So happy to hear that the yoga intrigued you enough to try, and then pleased you enough to stay with it. Love that you've found our "magic". Sending good prana and warm hugs --- Judi & David