Santa left us a nice, gently rolling sea in our stockings for an easy passage across the Gulf Stream. We hauled the anchor before daylight,and carefully plotted our way past the day markers to get outside to deep water. Then, we set a course for Bimini. 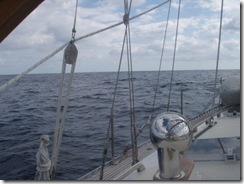 We had a lovely sunrise followed by blue skies peeking through big, puffy clouds. It got noticeably warmer as we crossed the gulf stream. We moved along under power at 5 – 5.5 knots and expected to arrive in Bimini well before dark. It was an uneventful crossing (my favorite kind – much like our trip around Hatteras).

Here is our boat not quite half way across. 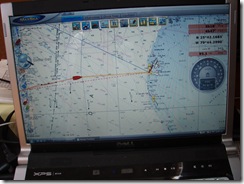 We each took a nap, first EW and than I.

When I woke up, EW said, “Land Ho!” and I saw Bimini on the horizon. Then EW remembered that this was a holiday crossing and said. 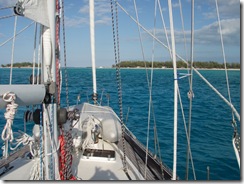 Hope you had a Merry Christmas. We sure did.

To give you an idea of the narrow weather window, on Sunday we went ashore and talked with folks who had arrived on Christmas Eve. There were 12 foot seas in the Gulf Stream. 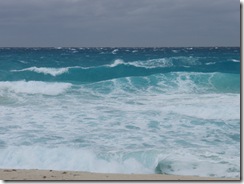 On Christmas Day the wind picked up over night and has continued. This photo from Sunday shows the waves on the beach in North Bimini. It would not have been a good day to cross the Gulf Stream. We had a 10 hour window and me made good use of it.

The winds were clocked at over 50 knots gusts overnight on the 25th. When we were ashore, EW noticed that Joseph had blown off the stable floor. He put Joseph in is place. 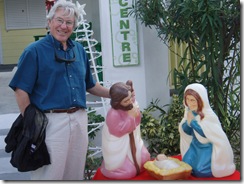 Later we saw that someone had tucked all three figures down where they would be safe from the high winds. 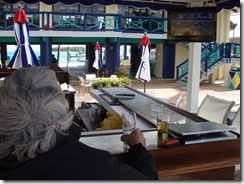 That afternoon, we found out that The Big Game Fishing Club Marina and Hotel offers NFL at the pool bar so EW and I watched the Bills get trounced by the Patriots. He did enjoy seeing more of the Bills’ new quarterback and he does have hope for the future. I was just tickled to sit in this bar and watch football in a neighborhood with the blue tropical waters and palm trees.

That sounds like it was a lovely Christmas! Thank you for sharing.