pink job (n.) Tasks on a boat usually handled by the female, such as cooking, cleaning, laundry and provisioning.

From  Cruising Sailors Glossary by the folks on Moonshadow

I'd never heard of "blue" jobs and "pink" jobs on sailboats until we had cocktails with a circumnavigating couple from Maine. When EW and I renovated our former home, we worked together (in a fashion). Each performing the skilled labor in his or her expertise. I am outstanding at space planning and designed the kitchen. I tore out sheet rock, laid brick sidewalks, painted, designed and made curtains, landscaped, and a whole lot more. EW created molding, handled a lot of the plumbing and electrical, tore off the siding, installed sheet rock, removed old windows and a whole lot more.

Aboard La Luna, I do handle the provisioning, laundry and much of the cleaning down below. EW does take care of the more technical and more skilled labor. Even though we seem to fall into the assigned gender roles I don't prefer to think of it that way. Each of us takes the lead on the task he or she does best. When I tell you that EW provided breakfast on one of our passages and that breakfast was peanut butter on buttery club crackers you will understand why he doesn't plan the meals.

So, as EW has wanted to do for weeks, we're devoting time to installing radios and wind generators and DSC antennas and I don't know what all.  He's made two trips to West Marine and has another planned for Friday. I've promised to provide any help he needs. I don't regret that promise, but I didn't like my first job.

For days EW told me that I would be removing old wire and that it was "very important". Right. I did it but I still don't get it. Yes we had at least 5 or 6 lines of wire run from the navigation station to the stern that had no use whatsoever. Four of the five lines had been severed from their previous task and were just hanging out behind bulkheads or under the floorboards. The final line went to a radio that will be obsolete when this project is done. Most of my work was in the bilge. I didn't use to like the bilge because it was "gooky" and I don't do gooky. But I have cleaned the bilge numerous times over the past 8 years and it is only "gooky" under the engine. I made sure that nothing fell under the engine and didn't have to do "gooky".

I did get dirty, and my hands got scraped, and I didn't like this job. Frankly, I still don't understand two things.

1. If this was so important why didn't he do it in the past 8 years?

But, ours is not to reason why ... I pulled wires. For 4 - 6 hours a day for two days. I nearly filled a kitchen size garbage bag with old wire. If you want tips on pulling wires, just ask. There is a technique beyond brute strength. Though brute strength helps. There were a few times I had to ask for help and EW's willingness to endure discomfort and pain humbled me. (I actually thought I had a higher pain threshold than he does. Not true.) 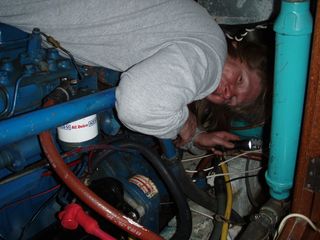 Getting at the wires in the engine compartment was the worst. We had to lay over "Pine Top", our diesel engine. It was a bit easier for EW because, how shall I say this?  Frankly, the "girls" were pained. They got in the way. I'm sure other women would have come up with a work-around. Or tolerated it. I bailed. Clearly laying across the engine supporting yourself with your chest while using both hands to haul wire is a "blue" job in this boat.

I bruise easy. EW bruises, too. But he persevered. I love EW.

It is done. The wires are pulled.  EW is drilling holes and running wire down from the deck despite working through little rain showers. Tomorrow is supposed to be a rainy day and his plan is to progress far enough today to work down below tomorrow.

My plan is to get my hands and nails cleaned.

EW is grateful and thrilled to have all old wires gone. I'm happy he's happy. I'm thrilled that he knows how to do this technical/skilled stuff and is willing to tackle just about anything on the boat -- even "gooky". I'm also glad he has a strong chest.

One of us has to. Doesn't matter whether you wore pink or blue as an infant. If you cruise someone has to do the tough jobs. Sometimes you both do.

I'm OK with that. Or I will be after my shower.

John will be so jealous - in his mind pulling out the old wiring is one of his dream jobs - go figure. Then again maybe I won't let him read this post in case he gets any ideas. I do believe you earned a little spa trip on the island when you arrive. Best.

Yikes, this job sure sounded like you both were very challenged. May the rest of your trip be more enjoyable and trouble free. (As much as possible that is!!!)
Glad you both love each other, this surely was a test and you passed with flying colors- Just look at that hand! OUCH!!!

The best preparation for tomorrow is to do your best today