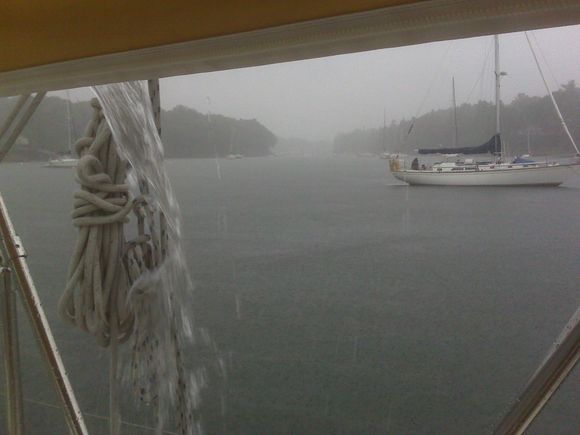 Sewing on deck makes me happy. 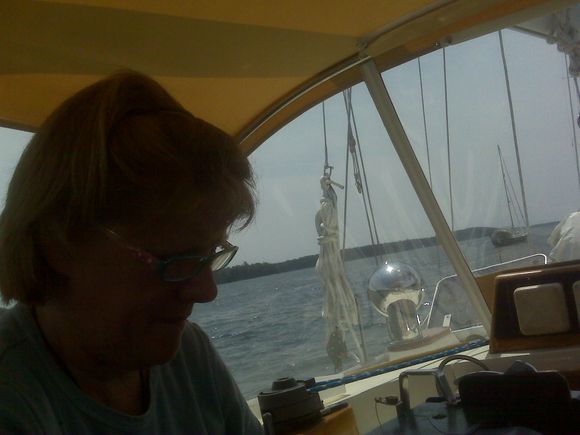 Good morning. Here's my view from my yoga mat. Sun Salutations on the stern deck. 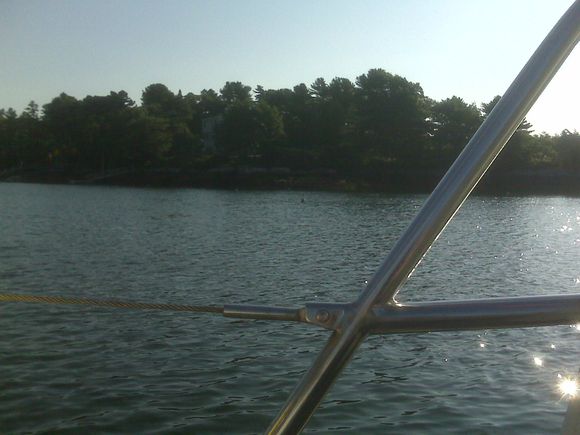 Too Much Information Tuesday -- What's in Your Pocketbook?

Life on the hook/mooring is certainly interesting -- particularly when one has a small business, belongs to various organizations and likes to entertain. We meet landlubbers (like my sister <hugs>) on land, but invite boaters out for drinks and dinner aboard La Luna.

On Saturday, we were hosting two other couples (see the fishing horror story if you missed it) and I of course had to clean the boat. I also had to grab a few things that had been forgotten when I'd shopped for the weekend.

The day before I had attended an early meeting, so I'd taken business clothes and all of my gear (hair dryer, make-up, etc) in with me in the morning and had left  the shower duffel in my car on Friday evening. After cleaning the boat on Saturday morning, I was hot and sweaty and certainly not ready for prime time when I headed in to shore to get presentable.

My intention was to grab my shower bag, head to the showers, and then go to the store. Since nearly everything I needed for my shower was on shore, I popped clean panties a bra and a casual T-shirt into my largish zippered shoulder bag and jumped into the dinghy.

Once ashore, I trudged up the hill to the car and said, "Oh the heck with it!" (It being looking and smelling good in public.) Instead  I took that quick trip to the grocery store. I was focused: father's day card, fizzy water, limes, cheese, done!

There was only one very nice looking young man ahead of me in the 14-or-fewer line -- but more filled in behind me. Imagine my horror when I opened my shoulder bag to find the items on the top were the items I had intended to use first -- panties and bra!  I don't think anyone else saw them and I hope that my red face was attributed to a hot flash.

Posted at 12:04 PM in Flashbacks and Stories from Home, Living Aboard | Permalink | Comments (1)

On Saturday we hosted "old" and new friends on the boat. One couple, D & J, we've known for a number of years. Like us, they are year-round live aboards in Maine and dream of taking off someday to go cruising. We met M & J just a month ago. In 2008, they returned from 10 years of cruising and living abroad.

May I digress for a moment and relate my favorite moment of Saturday's conversation? M said that there are no snakes on New Zealand and no poisonous beasties of any kind. We are definitely going to New Zealand.

Now then, back to our original topic: fishing on board.

So we discussed fishing gear and landing fish.  D mentioned that we "wannabes" had all read about using hard liquor to quickly and bloodlessly kill fish once you've landed them. M said that French Rhum from the Caribbean is excellent for that as it isn't excellent to drink. (Good to know.)

Her husband J, world cruiser, looked at us intently and said with great feeling and a visible shudder, "I have a fishing horror story."

Like children around a campfire, we begged to hear it, imagining a first person account such as those we had read about -- folks who landed a large, live fish into a small cockpit .. imagine the horror!

So he told his tale: "I was fishing on a friend's boat and he landed a good sized mahi-mahi - and as soon as he got it into the cockpit, he poured Jack Daniels into its gills!

We all leaned forward, waiting for what came next ..... and realized that was it. 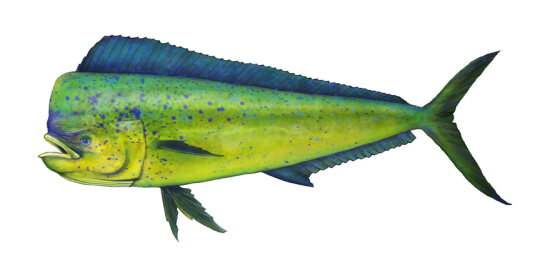 Posted at 11:16 AM in Galley Tips and Recipes, Living Aboard | Permalink | Comments (0)

End of Fathers' Day: Strumming in the cockpit. 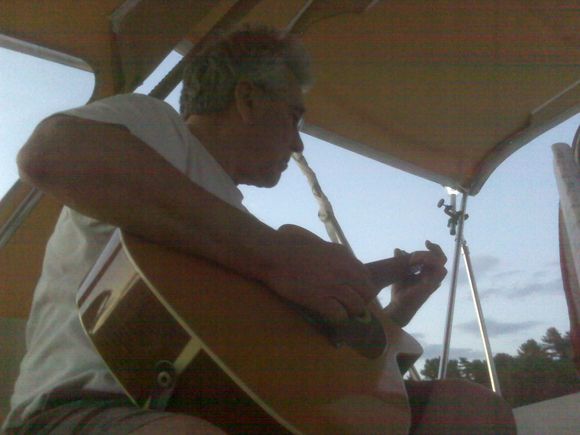 Sewing room with a view! 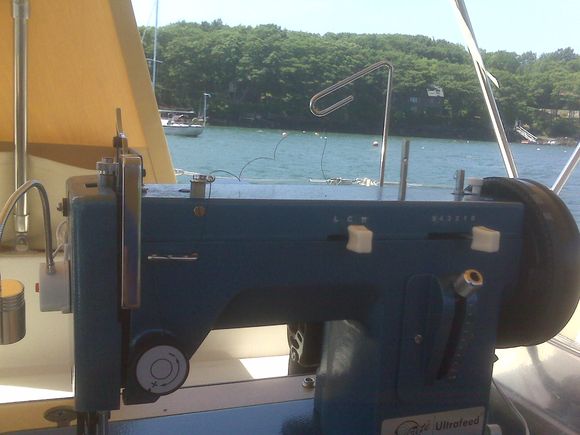 I have been a bad blogger. Absent. Quiet. (Well, I'm rarely quiet, but I've been quiet here.) We've been electrically challenged on the boat and that did not allow me to get into a rhythm with this new lifestyle. I've been working, sewing, writing (just not here) working on the boat and living my life with EW.

Let's catch up, shall we?

I guess the first bit of news you missed is -- We had a fire on the boat! I wasn't there, but I am absolutely certain that EW had some very exciting moments.

We've had electrical/battery issues since we started living on the mooring. We probably had them before but didn't know as we were using shore power all winter and while working on the boat in Harpswell. We installed new batteries (which we needed) but it didn't fix the problem. EW began to do some diagnostic/detective/electrical work. He's not fond of doing electrical work, but he kept at it. He realized when we replaced the batteries that there were some issues with the cables.

Two weeks ago while I was away overnight for my book club he switched cables at the batteries in the back, headed up to start the engine and--thank all the gods-- went back to the master stateroom for a tool. He entered the room just as the battery switch burst into flames.

Later he told me that his first thought was that he was on a mooring and the fire was between him and the propane tanks and that the exit to the dinghy was aft of the tanks. He wondered if he should leave immediately. Instead (and that thought process took longer to write than EW did to think it) he reached past the fire, unhooked the cables, and then grabbed a fire extinguisher and put the fire out. 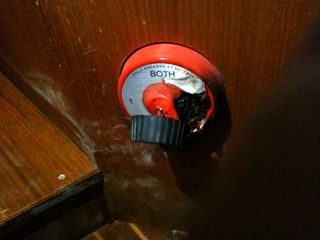 At some point in the evening, he emailed this photo with the text "Boat fire" and waited for me to see the message and call him. I didn't see the message (he should thank his lucky stars for that) so he called me around 10.

He later sent this photo.  All that white stuff -- that's from the fire extinguisher. More on that later. 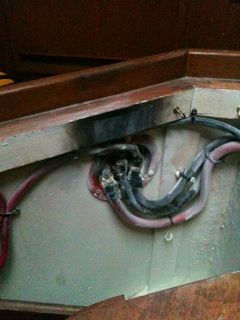 I was aghast! (I have always wanted to use that appropriately - "struck with horror" - yup that about describes it.)  I offered to go home but we agreed I'd stick with the plan. He kept saying it was his fault and I simply assumed he was wrong about that. I thought that the bad wiring had finally bit us and was delighted and thrilled he was there to take care of it. When I did get home late the next afternoon, EW drew a diagram of what existed and what he had done. Yep. He caused the fire. Poor EW.

On that fateful Thursday night when I had just learned about the fire, I had a hard time sleeping. In addition to worrying about what could have been (how foolish is that?) I also began to plot and plan about how to live on the mooring without any power at all. I'm not that low maintenance. There I was, lying awake in a beautiful bedroom trying to wrap my brain around the what the situation would be on the boat. My thoughts went something like this:

In the meantime, EW had gotten up early in the morning and taken the dinghy in to shore. He told S. at the boatyard what had happened, then he went to the gym. (He needed that.)

An hour later he pulled back into the boatyard just as the crew was bringing La Luna in to the dock. They had opened up space for us so we could get powered up again. We were very thankful about that as well.

I remained thankful, even as I spent Saturday cleaning up fire extinguisher powder. Wow. That's amazing stuff. I also had to wash four loads of laundry as our four underwear drawers were in that compartment and were covered with the powder. The next post will be about that. For now - be assured that things are actually as back to normal as they get for us. EW successfully fixed the electrical issues, we are back on the mooring, and life is good. I just have to start blogging.

Very low tide at 8 this morning. 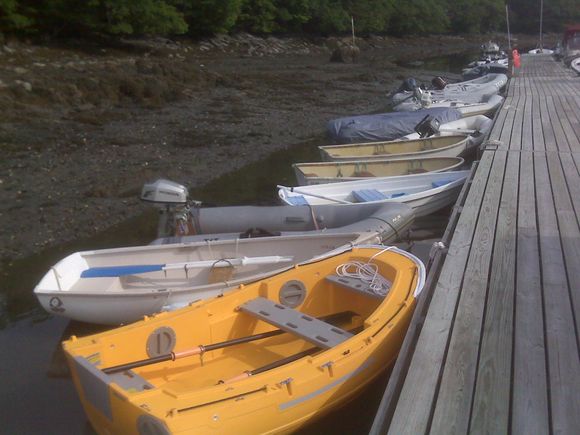 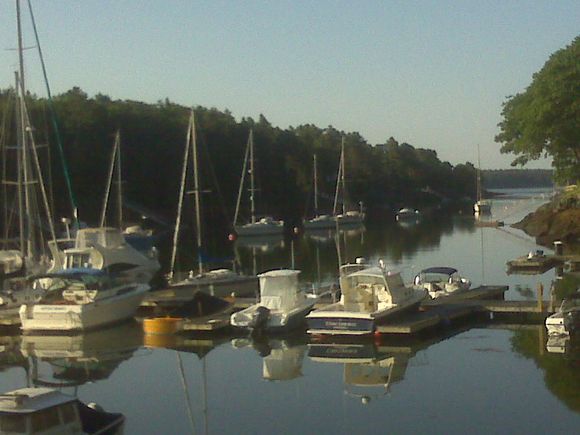