EW on deck in the fog. We are back on our mooring. 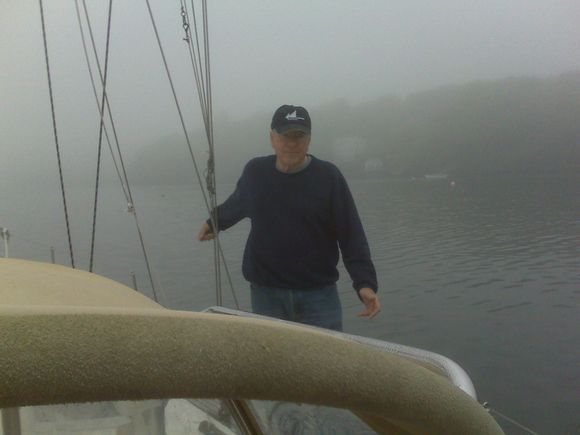 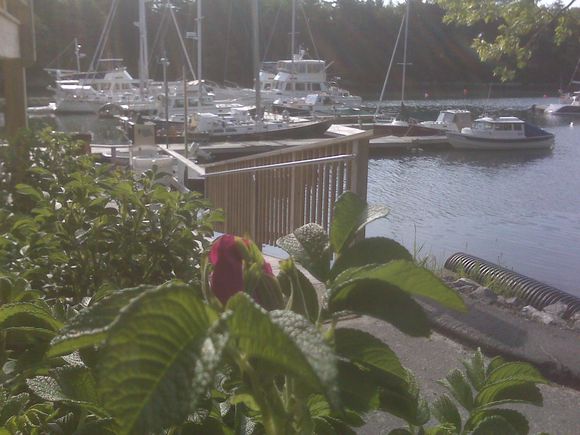 Asking Questions - of Those Who've Sailed Around the World

Last week one of our boating friends stopped by Harpswell asking for directions. This person had made an appointment with someone in the area who was selling some boating gear and our friend couldn't find their home. When I was told that the folks doing the selling had left Maine in 98 and sailed for ten years, going around the world, I decided to show my friend how to get to Bailey's Island and hopped into the front seat.

Thankfully, the couple selling a few things (things they don't need to cruise Maine) are truly sailing folk and delighted to talk with both of us. I love listening to folks who have lived the dream to remind myself that someday EW and I are going to set sail on our own journey.

We spoke for less than an hour. Our friend ended up talking with the husband about boat parts while his wife graciously answered any question I could think of. They are going to be around a while and as we get closer to setting our date, EW and I will invite this wonderful couple to visit La Luna. In the meantime, here are a few practical tips from a woman who has sailed around the world.

Thank you. Thank you very much, "M". You made my week.

Posted at 11:35 AM in Galley Tips and Recipes, Living Aboard | Permalink | Comments (0)

Life on Battery Power - Living on the Hook

I have been neglectful to you who read this blog. If it weren't for the pics you might wonder whether I was lost on the way in from the mooring.  Now that we are living without shore power we have discovered that the 5 year old AGM batteries need to be replaced. They are no longer charging fully or holding a charge. We may need an alternator worked on as well but we definitely agree that we need to buy batteries--six expensive 130 pound batteries--right now.

Without well-charged and working batteries I cannot use my laptop or sewing machine on the boat and my new routine for living on the mooring is not working out. That makes me testy and antsy and a tad frustrated. But I do not want to write a post that whines about the little problems that crop up when living aboard.

This is not a big deal. It certainly isn't as big a deal as when folks on land lose power for a few days. It isn't as icky as having a wet basement. It isn't as disruptive as a kitchen renovation. (Believe me, I know this for a fact.)

EW keeps expressing his appreciation of my willingness to put up with these frustrations. (He never did that when we were renovating the house.) I don't need EW to apologize to me or praise me. (Though I love praise.) It isn't necessary in this regard. I love our life.

I just want the batteries in and working. The company that sells the batteries to the boat yard messed up the order three times. I am not amused.

On Tuesday, we moved the boat into a dock that doesn't have hook-ups yet, removed the bimini and dodger, and moved the mattress from the master stateroom .... and then found out that the battery supplier had canceled the order. (No one knows why.)

The batteries arrived on Wednesday but one was the wrong kind. No problem. It was raining and I was in meetings all day. Couldn't have installed them anyway.

This morning, EW and I used a hand cart to move each of the 5 batteries down the ramp at high tide. (Our mothers didn't send us to school just to eat lunch!) After my walk, work-out and breakfast, I again I removed the bedding and mattress from the master stateroom. After that, EW came down to tell me that the supplier did not have the 6th battery in stock and it wouldn't arrive until tomorrow.

I was not happy. I was, in fact, snippy. In an effort to move forward and because I won't be available until after two on Friday, EW decided to load the four batteries that go at the foot of the companionway today and to load the two that live under our berth tomorrow.

We used the boom and a block and tackle to move old batteries out and new ones in. It's a from of exercise. 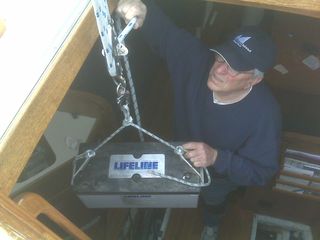 Here is EW in the boat. I'm in the cockpit helping. (When I wasn't taking a photo.)

Please note: This time EW said, "Do you want to pic this?"  He's definitely learning!

It worked great. We raised each battery up as high as we could, and moved the tackle back on the boom to take it through the gate and off the boat.

Then we reversed the process with the four new batteries. For this we had help from one of the crew, who worked below, guiding and fitting the new batteries into place. 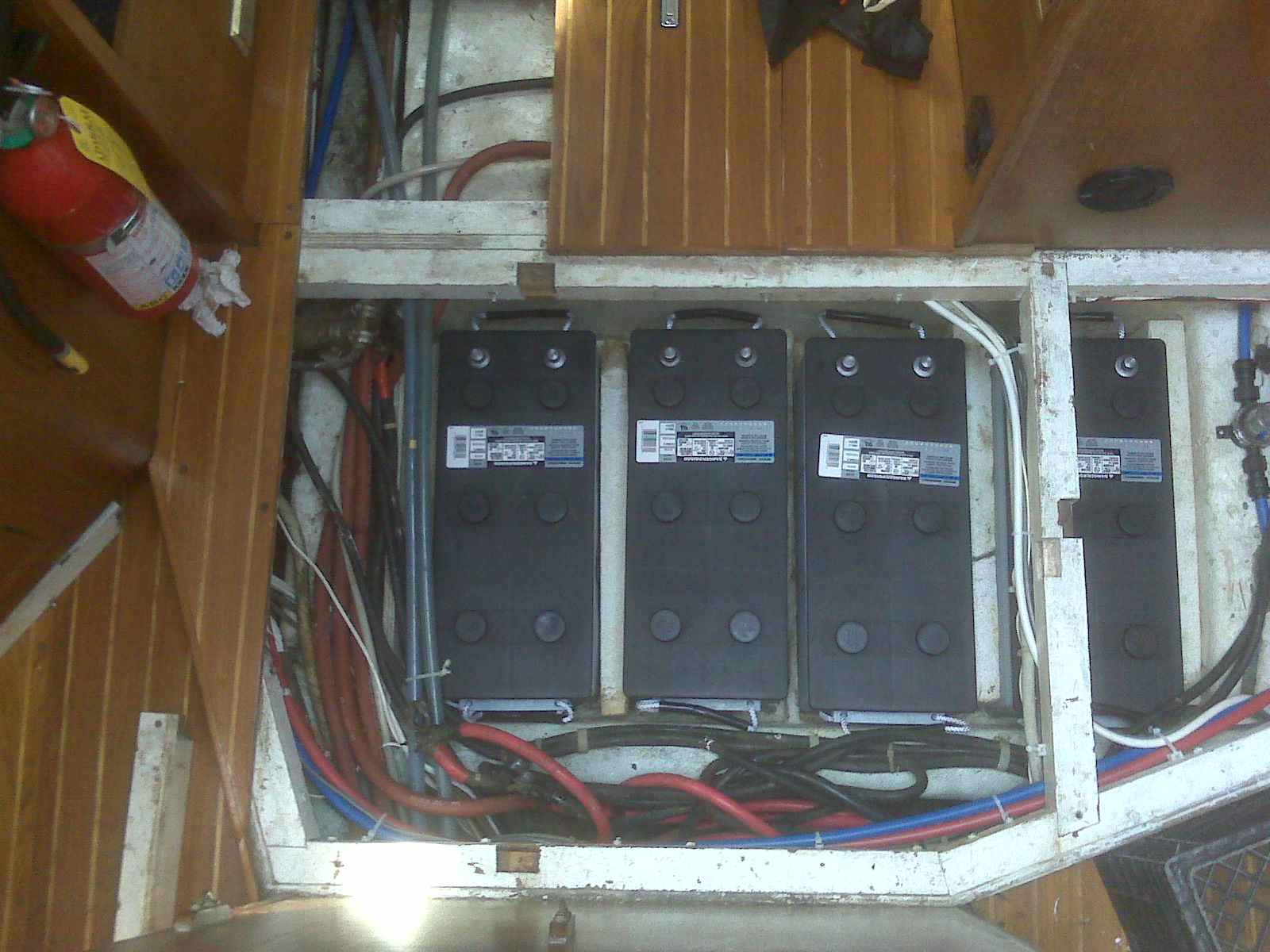 No biggie.  Just part of the adventure.  Sailing is fun.

I plan to sew this weekend with at least one break for sailing Selene. I'll also write more. I promise. 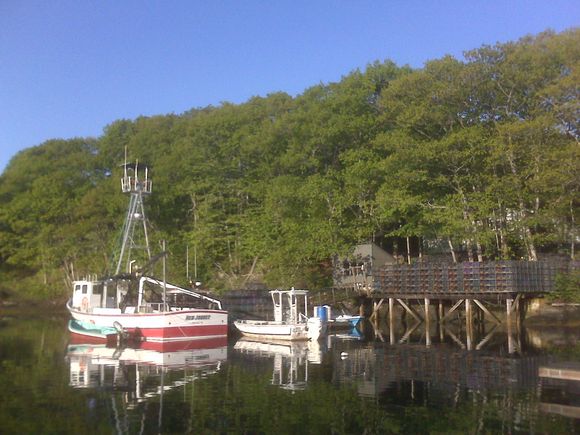 View from my yoga mat. 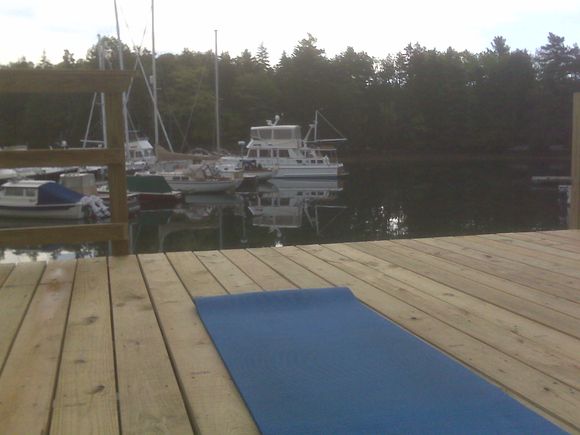 View on my walk: signs of fauna. 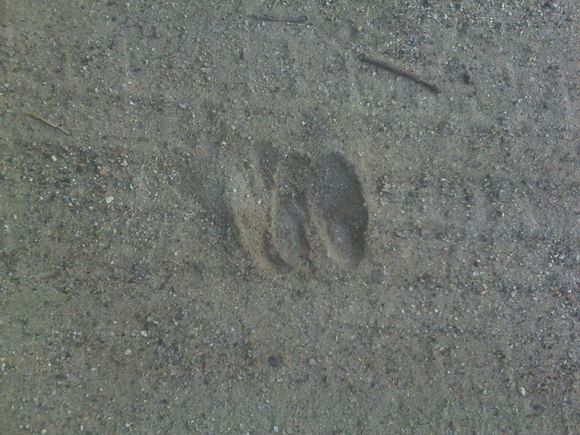 Early morning from the dinghy. La Luna is on the left. 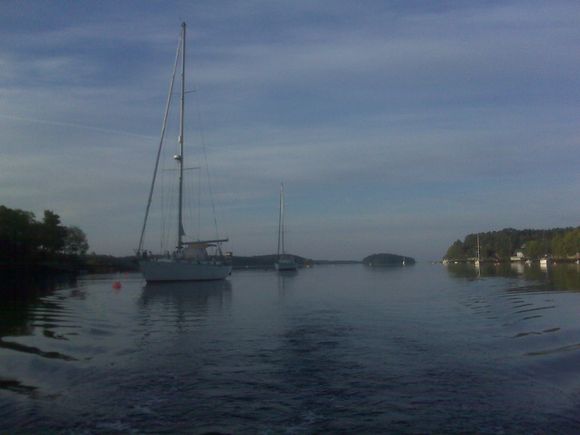 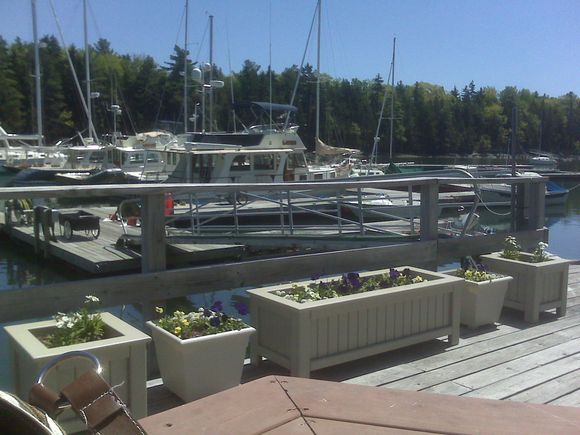