Home Archives Profile Subscribe
Breakfast on the deck. I love my life.
View from the deck. Good morning to all.

Batteries, Round Two -- Power for Living Aboard

The sixth and final battery arrived Friday and EW and I successfully installed the last two.  These live under our berth and are positioned just below the large aft hatch. EW rigged up the boom to allow us to use the tackle on the end of it and he and I were able to handle the whole process of removal and replacement without help. 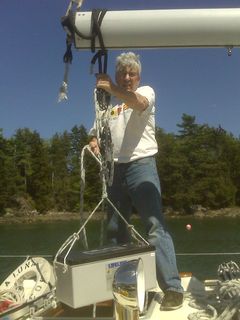 After we got the old ones off, I dragged the first of the two new batteries into place on the dock and tied hitches to the handles. Then we raised the battery to clear the lifeline, moved the boom over the hatch, and EW went below to guide and place the battery while I lowered it (slowly!).

As I prepared to drag the second battery into place, EW asked, "You OK with doing this?" I guess he wondered whether the process was too much for me. "Keep going, I said. I like power." (Meaning, having full electrical power on the boat--but meaning as well that I like doing things well.)

EW got it (sort of) and said immediately,"Both kinds of power. What you are doing now and the kind we can depend on."

I should hope not. I gave him a pass, tied the knot and did my job. You can depend on it.