Home Archives Profile Subscribe
La Luna is in the water and we are moving aboard. Happy Dance!
Snow - YES SNOW on our new bimini. That is just wrong.

I married a "Do-It-Yourselfer". More than that -- I sought out one as a life mate. When dating (over 27 years ago) I was not attracted to men who could not fix or repair something. Men with soft hands held no appeal. I married a man who will tackle engines, home repair, fiberglass, electricity, plumbing and more.  I got that right, but I neglected to teach EW that I am a rare and fragile flower and cannot possibly do everything he does. Consequently, I am also a "Do-It-Yourselfer" - sometimes willingly and sometimes dragged, goaded or bribed into it.

We've been out of the water for two weeks. During the first few days, EW hustled to get projects completed prior to his knee surgery. I helped. After EW's knee surgery, I was it -- the person charged with completing painting and polishing the hull. You have a lot of time to think about where you went wrong when you clean and wax a 47-foot sailboat.

I narrowed my failure down to the two years prior to our marriage when EW came across an old wooden skiff and thought it would be fun to fix up and use. Our "dates" one spring consisted of applying fiberglass to this old boat and painting it green. Really. He would invite me over and mix up the resin, give me gloves, scissors and cloth and show me how to apply the fiberglass. Then we fared the hull and painted the boat and attached a motor that had been manufactured prior to the year of my birth. (Call him "Mr. Romance" - not!)

Sure, there were promises of gin and tonics when we were done each day, and romantic boat rides were mentioned.  Sure, I could have perched on a nearby stool and offered to fetch lunch, but no  --- I delved right in and have been working alongside him ever since from boat to boat to home to boat.

It was a bit chilly this weekend. There were other boaters in the yard working on spring projects. I was the only woman; no makeup, wearing EW's overalls and a Buffalo Bills cap, and one 87-year-old gentleman stopped by to talk. He had sailed a Westsail 32 around the world and raced other boats in the Northeast. Now he says he's reduced to a 19-foot day-sailor.

He said I was "beautiful". I laughed and he recited Shakespeare's sonnet: "Shall I compare thee to a summer's day ..."

He recited the whole sonnet. Eloquently. And I felt beautiful; and accomplished; and capable.

I was exactly where I should have been this weekend. Doing what I love, being a player on the Harts At Sea team. Maybe I didn't fail after all. 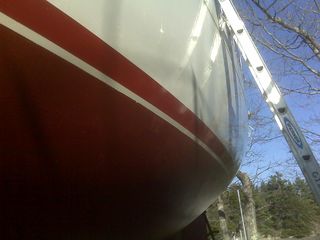 Thank you, thank you. I read it aloud to my "do it yourself" spouse, as I think every liveaboard woman will want to. Just plain lovely, funny, and HART-felt.

This is great, Barb. You should be very proud of yourself! I can't believe you cleaned and waxed that boat by yourself! You certainly earned the sonnet! Have a great weekend.

That older gentleman saw what those who love you have always seen. You are beautiful, capable and accomplished woman and a wonderful friend.

Failure is just one part of life's cycle. It's really up to us whether we'll go through it or succumb to it. Repairing a boat is not really an easy task, but it's good to read something like these once in a while.