If you've been following the stories from the Northeaster -- you will know this is (finally) the last installment. Clearly I would much rather write about other folks' challenges than describe how we did not adequately prepare for the storm. Time to play fair.

Late last fall we hauled La Luna and had the mast pulled to be worked on this winter. The riggers at Great Island Boatyard also looked at the deck gear and found that two of our cleats (both stern cleats) had cracks and were compromised. At the time, we thought they could be repaired. So when EW and I got La Luna back to her winter slip we removed both stern cleats.

Stern cleats are important. When on the dock La Luna is tied with at least 4 lines: stern line, bow line, and fore and aft spring lines. The last two lines are attached to the same cleat that is near the middle of the boat - one line runs forward to a cleat on the dock and one line runs aft to a different cleat on the dock. Those lines keep us from moving to far forward or too far aft. In the winter we usually have an extra bow line. During storms we normally put on an extra stern line.

During The Year From Hell - a few years back when we hauled out for what turned out to be an entire year - we did a lot of work on the deck and removed every single thing from the deck. Everything. Including all of the cleats, so I know what it takes to remove or install each cleat. The two easiest cleats to reach are those in the stern. The nuts and washers and backing plates can be accessed from the lazarettes. No big deal. The bow cleats are somewhat accessible - if I consent to playing a pretzel in the anchor locker. Getting to the cleats at the side of the boat require removing the inside of cabinets. Not fun at all.

We coulda, shoulda replaced the starboard stern cleat with the port bow cleat -- a cleat that sees no use on this dock in the winter. But we didn't. I didn't want to go into the anchor locker. EW could have made a cleat out of scraps of hard wood from the boatyard. It had been discussed. But he didn't. Instead, we ran the dock line from the dock, through the chock (with chafe guard on it) and then took it in a hard right angle from that chock to a winch near the cockpit. Worked fine. Until we had 60+ MPH winds.

So, as described in the time line post at about 9:00 PM we heard a rather loud bang and scrambled up on deck. EW immediately realized that the stern line had snapped - those suckers are some loud when they snap. Our stern was being pushed off the dock and there was no way we were getting on the dock or that anyone on the dock would be able to haul us in. EW started the engine and used the spring line to pull us into the dock and to take some of the pressure off of the other lines.

NOTE: Boaters will understand the reference to the spring line. This is yet another use of physics when boating. A good description of docking and spring lines can be found here -- where they use terms like "vector of force" and  "forward thrust". The short explanation is when we have a spring line tied from the mid cleat of the boat aft on the dock we can put the engine in forward and turn the wheel away from the dock and the boat will lay up parallel to the dock. Parallel is good.

So, EW starts the engine and I got into my foul weather gear and then on the radio and asked for help from our neighbors. They came out in force. Bless them. EW stayed in the cockpit and I rigged a new line and got it on with help from our "dock crew".  Within minutes (seconds?) of turning off the engine that line snapped. Once again, our stern was pushed 10 - 15 feet off the dock. At one point one of our neighbors was trying to hold her steady by pulling on the power cord - not a preferred method - but better than having other lines break due to the angle and strain they were under.  EW started the engine again and we put a third stern line on.  That held and we all retired for the night again. Yeah, right.

About 10-ish, EW and I were below when we heard a very loud bang. This was a different sound than before and we both thought that the door had blown open. EW dashed up on deck and then started back down --

"No, the door's fine," he said, sounding relieved.

Me: "Because something banged and the door is the easiest to fix."

EW: "Oh, right." And EW went back on deck and said a bad word as I scrambled into my foul weather gear and he started the engine. Yes, the stern line had broken again -- as had the shrink wrap frame. Must have been one heck of a gust to break both at the same time but that explains the extra loud bang.

We agreed that I would call out the troops so I got on the radio, "South Port Live-Abaords, South Port Live Aboards, this is La Luna."  D came on the radio immediately. I told them we had a broken line (again) and they said they would be right over.

Then EW told me to have them wait a minute while we talked -- so I relayed that. I think (and this is embarrassing to admit) I think I told them to "stand down". Definitely watching too many macho movies with EW.

So we talked and EW said that the wind and waves were worse and weren't going to get any better. He knew he needed to find another way to rig a stern line, but that wasn't possible in the current conditions -- or until he had time to think it through. We decided to "drive" the boat through the worst of the storm. He would take the first shift, I would try to rest and relieve him at 11:30. By 1 or 2 the tide would be down and hopefully the winds would have lessened and we could rig a new line.

If you've read the Saga of Windrifter's Broken Dock you know that plan worked but that at 11:00 I left EW to handle the boat alone while I went to help our neighbors on Windrifter. In the meantime, our door frame caved in and EW was alone in the cockpit with no communication "driving" La Luna and trying to hold various broken boards away from different parts of his body. Yeah, he had a great time.

At some point, he tied the wheel hard over, leaving his hands free to hold the frame and his mind free to work out a new and better stern line rig. When I finally showed up to help him, he had come up with a brilliant plan.

He took a very long, strong line and ran it from the port winch aft to a snatch block that he placed on the port toe rail directly across from the stern chock on the starboard side. 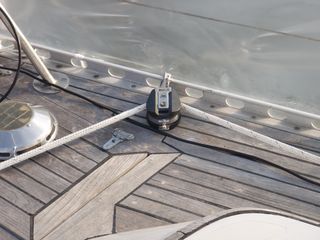 He placed an extra hose on the deck to prevent the line from chafing the deck and then he tied this line to the broken line that had a snubber attached.

The snubber acts as a shock absorber and there was no way we had time to get the snubber off the old line and onto the new one. A simple square knot connected the two lines and held (and is still holding). 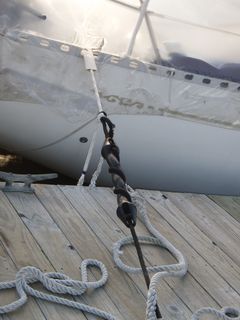 Once the line was tied to the dock and through the chock (with chafe gear) we used the winch to tighten it. Perfect!  Or as EW says, pounding his chest, "I fix".

The next day he actually fixed the shrink wrap frame and door. I love EW.

Thus ends ALL of the stories of the Northeaster of February 25. Aren't you glad? I know I am.

Here's the broken door and frame the next day. During the storm, EW was sitting just beyond the left top corner of the door. 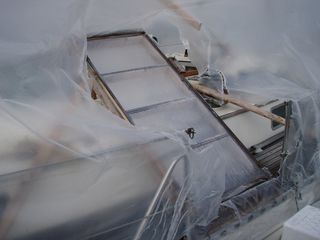 Here's a shot of the broken door from inside La Luna. That's one of our great neighbors. 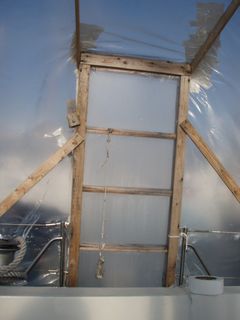 I'm ready for spring.  And let me remind you -- in the first post about this storm I said we would handle a good northeaster if it meant a great spring and summer. You can all thank me in July.

Posted at 11:04 PM in Living Aboard, Wintering Aboard in Maine | Permalink | Comments (2)

Wow, great story. Glad you all made it through in good shape! Sounds like nice comraderie of "live-aboards"! Of course, we get to enjoy the romantic side of the life aboard a boat while you all deal with the harsh realities as well! Someday... once the kids are grown up, who knows... we just might try it!

Thank you, Candice. There are people who have done this with kids --even in Maine -- but I wouldn't. Our adult son is in California. He's a bit of an adventurer so he sees nothing too weird about this. Of if he thinks otherwise he hasn't said! Let's hope for a wonderful summer on the water.