Living Aboard During the Northeaster of February 25, 2010. Yeah. That Was Fun

Whew!  It is now two days since the storm ended and EW and I are not back to normal here yet -- but the boat looks great.  A lot happened between Thursday night and Friday morning and we didn't make it to bed until after 3:00 AM. It is currently Saturday, the 27th at 6:48PM. In the Virgin Islands it is 81 degrees and the winds are 9 knots from the southeast. That sounds really, really good right now.

This post would be massive if I were to tell everything that happened during the storm. So, let's set the stage and create a rough time line. Subsequent posts over the next couple of days will describe some of the events in greater detail. If you see something in bold here you will know there is going to be a post about it. 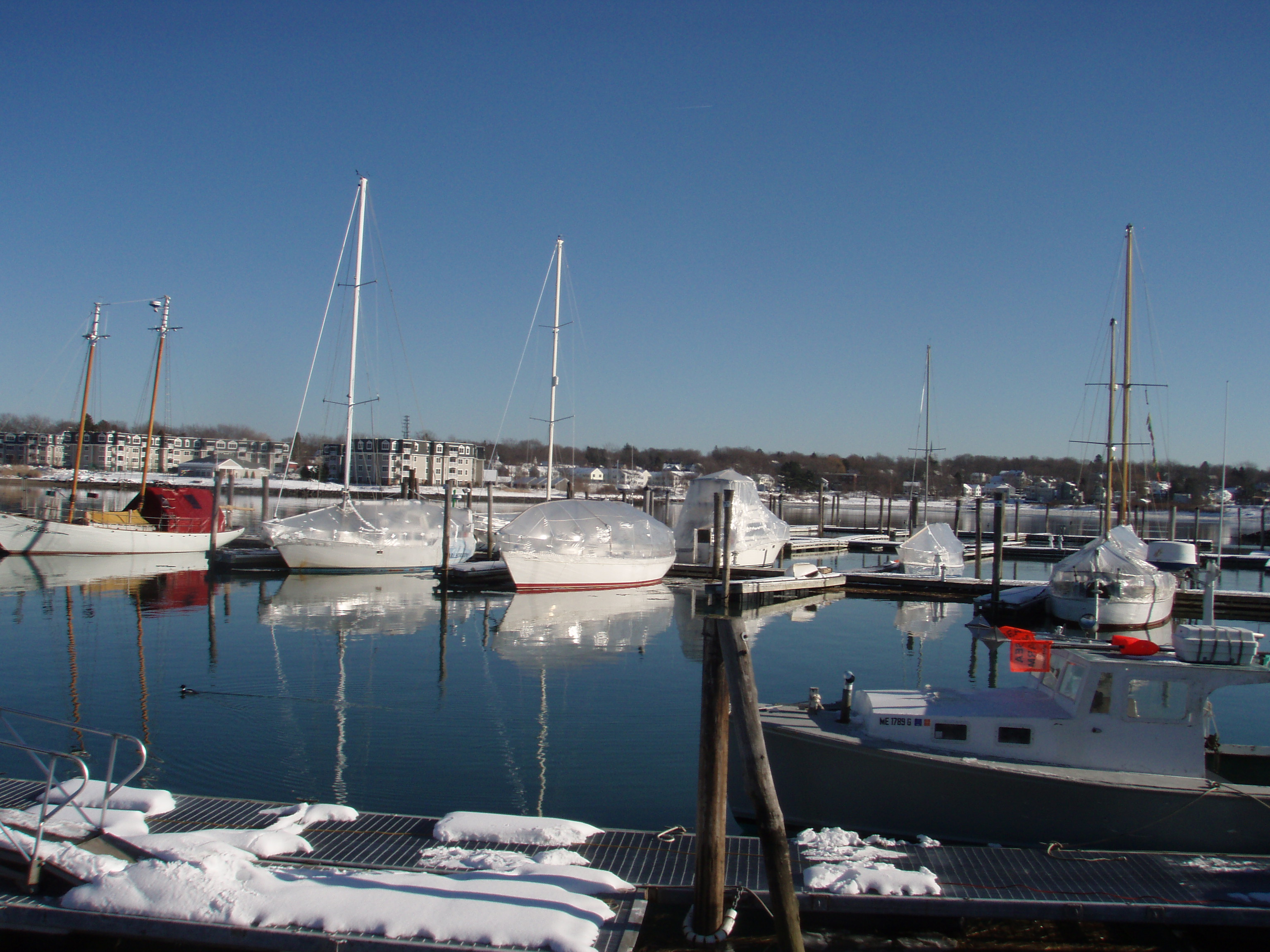 The photo at left was taken from the fuel dock o


n a beautiful winter day. The wooden schooner on the far left is owned by R and his wife. To their right is a steel sailboat owned by C. These owners don't live aboard, but R and C both stayed on their boats for the storm (or as you will see, most of it). Our boat, La Luna is the sailboat with the red boot stripe and no mast. To the far right is L's boat a big old wooden something. He was not on board during the storm. There are two live aboard boats to the right of L and out of the photo -- Sam (of the recliner) and M. M was not on board during the storm. On the other side of the dock is B on a catamaran (behind the schooner), J & D in a sail boat (you can see their mast behind and to the left of our boat) A on the power boat and T on the small sail boat.

5:00 - I wrote an email to our live aboard neighbors, asking if they were going to be on board and letting them know we would monitor channel 78. That makes it easy when someone needs help -- they just get on the radio and we all respond. The prediction was for heavy rains with winds around 30 MPH with gusts to 55MPH. (26/47 Knots)

5:30 - The restaurant next door to our marina was hosting a neighborhood gathering and EW, our 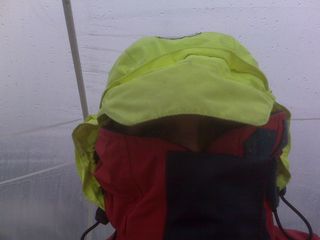 neighbor J and I decided to go to support the cause (local businesses) and partake of the free food. I wore my full foul weather gear up to the event.  Not the height of fashion, but I stayed dry!

6:30 - The wind was picking up, so we left for our respective boats. EW and I watched J as he went aboard - falling in would be nasty and falling in with no help present could be deadly. EW and I checked the lines and settled in. I Tweeted and wrote a blog post - which proved to be just a tad to prophetic.

8-ish - C came on the radio to say his stern line had broken. EW and I and others went out to help him attach two new ones. Back on board, I tweeted and watched something on Hulu. EW asked of any of "that chocolate" was left. Not likely. He had last seen a chocolate bar in the cupboard over two weeks ago. I did feel guilty about eating it and decided to make chocolate bark.

9 -ish - Bang! Our stern line broke. Those suckers are loud. I got on the radio and folks rallied to help us. EW had to start the engine to get the boat back onto the dock. Once the new line was on, J. noticed that our spring line was a bit long and shortened it up on the cleat. Back down below, we went for the chocolate. It tasted great, but it never did harden so we had to eat it with spoons.

9:30-ish- Another bang from the deck. I thought it might be the door banging open, so EW looked out the companionway and cheerfully reported, "No the door's still shut.  I said, "That's a bad thing." He was puzzled by my response until he realized that we did hear a bang and as I said, "An open door is the easiest thing to fix." Sure enough, our stern line and broken again. Back on the radio. This time T had a line he suggested we use. While I was out on the dock, someone said that one off the buoys offshore was recording 22 foot seas. Lovely. The winds kept building.

10-ish A very loud bang. Yep. Our stern line had broken and -- to make things interesting the ridge pole of our cover frame had broken as well. EW went to the cockpit and started the engine. I got on the radio and made the call -- then he told me to have folks stand down. As you may have surmised, we had an issue with the way the stern line was rigged. I promise to share fully what we had done - and were now up against - in a subsequent blog. He and I talked and decided it made no sense to keep breaking lines. The wind was too strong and we had to re-rig the stern line. We told folks that we weren't going to fix the line until the tide went down. Instead, we would take shifts manning the helm and holding the boat onto the dock. Oh joy. EW took the first shift and suggested I get some sleep. I set my alarm for 11:30 and settled onto the settee.

11-ish - D came on the radio. She asked whether I had heard yelling and whistles. We couldn't hear anything over the engine and shrink wrap flapping and the creaking of the broken frame. (Couldn't sleep, either.) I told her I was on my way, suited up and left EW in the cockpit, driving the boat while trying to hold the wooden frame up. R and C were on the docks. They had gone out to check lines and realized that J and D's dock was breaking away from the main dock. Instead of getting on the radio, they had yelled and blew whistles to get J and D's attention. The three of us decided that we had to get the marina crew down here. R and C went up to shore to make that call.

11-ish as well -- A came home from his classes to find that his cover was pretty much gone. He cut the rest of it away and stowed the frame so it wouldn't blow away and hurt someone or something. (Yep, that's the boat I had mentioned in my earlier blog).

11 something - L's wooden sailboat broke a bow line and the bow started pushing on the next dock. Sam's sailboat is on the other side of that dock and the extra pressure could cause his dock to break. Once R and C came back down, they got Sam out and the three of them rigged a line from the wooden boat's anchor to a couple of pilings, taking pressure off of the dock.

12:00 or so - The tide was now (finally) low enough so that the mud flats stopped the waves. We still had high winds and rain. Later on Friday we found out that the winds had gusted to 67MPH at the airport. I went back aboard La Luna to let Stew know what was going on and to help him. With the ridge pole broken, our door had collapsed onto the boat. To get aboard I had to crawl in beside the door through the ripped plastic. EW had figured out how to run a stern line that would hold and he and I were able to do that without help. We really thought the cover might blow away so I decided to clear all the stuff from the deck. We had project stuff, "mud room" stuff, two foam mattresses, and stuff from the aft lazarette.

12:45 - Then, with La Luna finally secured, I stayed on board and EW went out to help J and D. You didn't think that was over, did you? Not by a long shot. I stayed with the boat and iced my injured arm and Tweeted a bit.

1:15 - The wind was still pretty strong but La Luna was secure so I went back out to help with J and D's boat. R and C had decided to go to their respective homes when the boat yard crew arrived around midnight. They thought that other docks might break up and decided they had made their boats as secure as they could.

3:00 - J and D's boat was tied to the next dock down (the same one the power boat is on) and EW and I went to bed. As I was drifting off, I heard voices out on the dock but we didn't realize that a decision had been made to move their boat to C dock. We missed that.

When I read this post, it all seems so matter of fact. It wasn't scary, but it sure as heck was physical. It was a lot of work.

After this, we had better have a very sunny spring and summer. Remember, if we do, I want some credit for it.

REVISION -- Was just informed (March 4th) that the web site I used to convert from Knots to MPH was wrong, or I used it wrong. The post has been changed to correct that. Thanks to John and his friend Chris for letting me know.