Home Archives Profile Subscribe
Living Aboard During the Northeaster of February 25, 2010. Yeah. That Was Fun
Chocolate Bark - A Live Aboard "Cooks" During a Storm

This is the continuing saga of our experiences during the February 25 nor'easter while living aboard. As with the previous time line post, all items in bold will have a post attached soon.

So as near as I can tell, I was the only person injured on the docks or boats during Thursday's storm. It happened as I was standing on the main dock, Dock A, "standing by" for the folks on Windrifter. There wasn't much I could do for them as their dock had broken; we had called the marina crew and were waiting for them to arrive with heavy lines, a come-along, and the keys to the work boat.

It was shortly after 11 and EW was running La Luna to keep her on the dock as we had broken three stern lines and weren't going to attach another until we could do a real fix in calmer seas. R and C - owners of a wooden schooner and a steel sailboat - had gone to shore to call the marina's answering service. The owners of S/V Windrifter had a winter cover and not a lot of visibility. Their dock and piling were useless and they were 10-15 feet from any dock. My job was to simply monitor the situation and sound the alarm if things got worse. It would take the marina crew 40 minutes to arrive.

The winds were gusting over 60 and sustained winds were right up there. I was concerned about the potential for injury from flying debris and kept watch up-wind as much as possible -- when whack!  J from Windrifter had opened his cover door to check on the situation and on me. 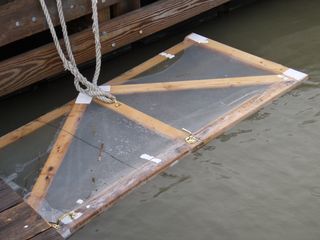 The wind ripped the door from it's frame and it bounced off my left arm as it headed into the water on the other side of A Dock. The pain and surprise brought me to my knees and J was horrified. (His wife D says he will feel guilty for a long time.) It wasn't his fault and I quickly realized that I wasn't seriously injured. No break in the skin, hand and fingers worked just fine with no real severe pain. Now, over two days later, I have a sickly green bruise.

Later that night, while I stood watch on a fully secured La Luna, I iced my arm, had a spoonful of chocolate bark, and tweeted. (Hey - I was bored - and chocolate is medicinal.) I had told EW that I'd been hit by the door but we didn't have time to talk about it and could barely carry on a conversation under the shrink wrap cover. So he was a bit surprised later when D told him that I had a "compound fracture". That does explain why he asked me if I wanted to go to the hospital!

A bit later D and I went up to "headquarters" to retrieve Romeo, their Maine Coon Cat and D expressed concern for my arm. She used the "compound fracture" phrase with me and I laughed and asked her if she saw any bones sticking out of my arm.  She meant stress fracture -- stress will do that to your language skills -- and laughed too. I assured her there was no fracture and we cleared that up with EW and J so no one lost sleep over my arm - including me. Heck, I had worse bruises on my honeymoon!