Home Archives Profile Subscribe
You don't often see this on the dock: bare foot print in the frost.
Carbon Monoxide - Staying Safe On Board During a Maine Winter

Yesterday, I had the wonderful pleasure of talking with a college friend whom I hadn't seen or heard from for 8 years. She had gotten the Christmas letter that described our move aboard La Luna and assumed that we had already set sail - so we lost touch.  In 20 minutes we attempted to catch up on careers, kids, husbands and our living aboard lifestyle.

She has no clue. Really.

I mentioned the shrink wrap and she immediately decided that we moved off the boat in the winter even tho' I had just told her otherwise. Her knowledge of shrink wrap is the total enclosure of her in-laws lake boat. No one gets aboard until spring.

The first step for wrapping for living-aboard is to create a frame and a door. While you can install a zipper in the shrink wrap, that is just not practical for real life. Some folks have a low frame, consisting of the boom aft and 2X4's forward to the bow. The simplest use plastic shrink wrap tape from this center pole to the life lines. Shrink wrap plastic is laid over this, banded and shrunk. 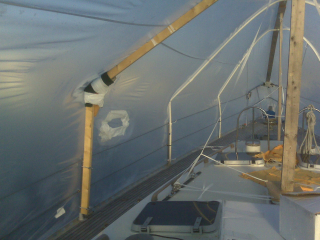 EW has created a series of frames over the years using a combination of 2X4's and PVC piping. We attach upright PVC lengths to the stanchions and then attach long PVC pipe in a bow to create height. We have found that we don't like to crawl when we have to go forward so we can walk upright on a great deal of the deck. This is particularly useful as we have deck projects to undertake this spring. 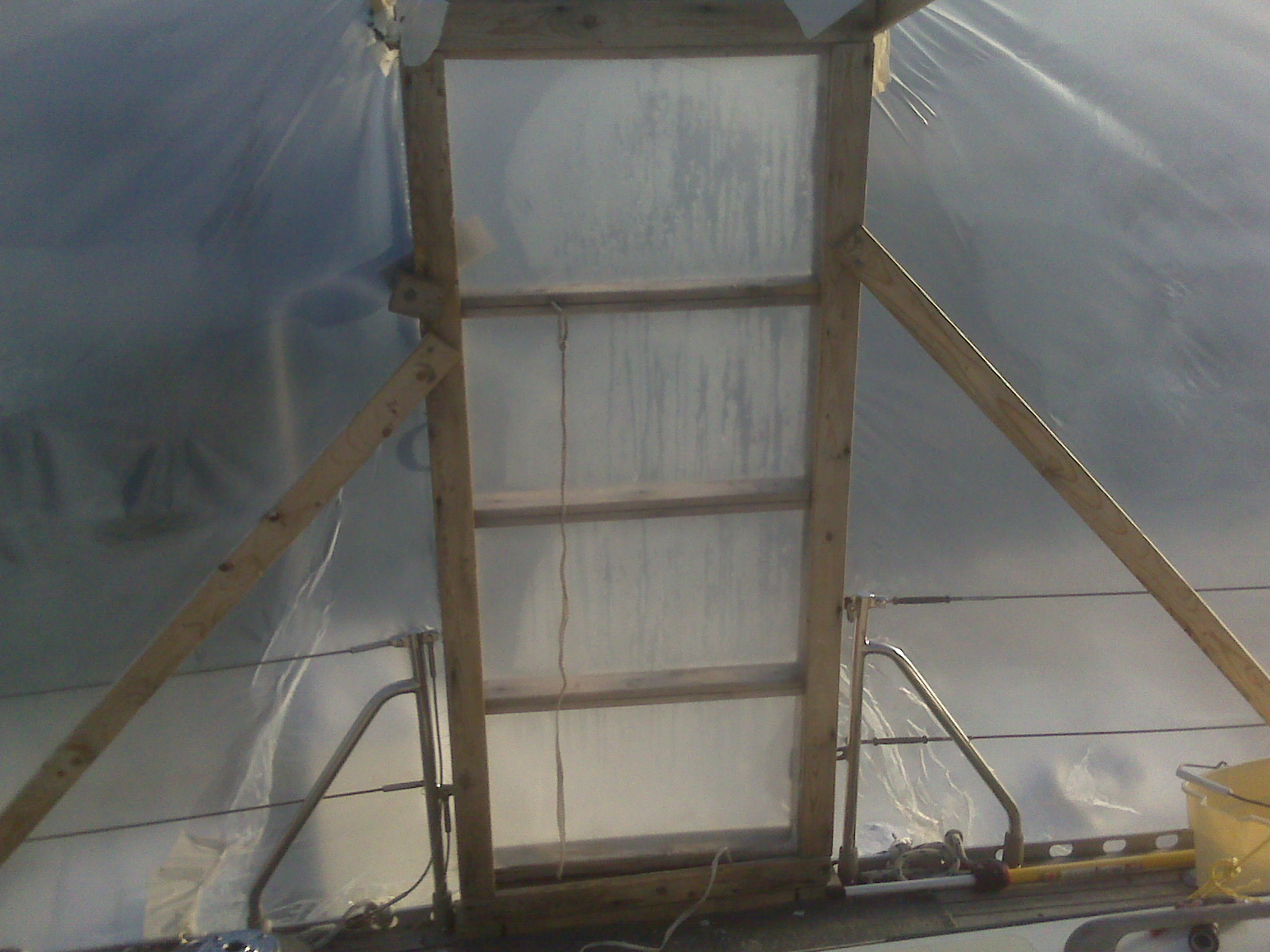 He also built a door with a simple wooden block latch. It works - usually. We end up with a mud room and on sunny days it can be nice and warm for deck work.

As you may imagine, all of this cobbled together wood and plastic is not rigid. During last night's winds -- 20 - 30 knots with gusts to 50 -- we could hear the frame creaking and flexing. Around 8:30 we heard two bangs, and headed on deck. The PVC pipe that goes from the port side to the center frame over the cockpit had worked its way out of this year's clamping method. (EW has feels duty bound to improve the frame each year. It's one of the things I love about him, but I am looking forward to using our mental and physical energies to sail through warm waters in during Maine's winters. <She sighs.>) 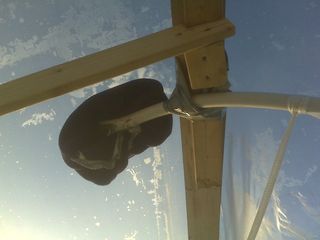 In less than 20 minutes, we were able to get the pipe (mostly) back in place, attached, and reinforced with duct tape.  (Mainahs and sailors love duct tape. We use a lot!) I was concerned that the pipe end would poke through the plastic so we prevented that using what we had on hand -- or on head -- my hat. Ah well. It is for a good cause. And I love living aboard. Really.

Posted at 08:59 AM in Living Aboard, Wintering Aboard in Maine | Permalink | Comments (3)

Oh, I sympathize about the man constantly improving things stuff! Spring is less than two months away. Hope we don't get another Patriot's Day storm. Smooth sailing to you.

I'm newbie here, I hope to get friends at this forum