Fueling the Furnace on the Sailboat - Winter Live-Aboards

I know I still "owe" you a more in depth discussion of our heating system. This is another small post about the fuel. The wonderful ITR Hurricane Heating System uses diesel and picks it up from our tanks. In addition to running the furnace, in the summer we can switch a couple of valves and use the furnace to heat water. This is a much greater use of energy instead of running the engine for an hour to keep the batteries up so we can heat the tank, we just run the furnace for 15 minutes. Much more efficient.

EW installed the pick-up higher in the tank than the pick-up for the engine - so in the summer we have an early warning system. If the furnace doesn't fire up to heat water, we are down to 5 gallons of fuel or so.

In the winter we have to get fuel to the boat as we can't take the boat to the fuel. There is no moving when the cover is on! We have two 5 gallon fuel jugs, two cheapo liquid pump thingamajigs, one funnel with screen and the Bucket of Doom. That's just a big old bucket that we store the pumps and funnel in -- keeping the diesel mess off the boat and out of the water.

Note about us: Like many families we have developed our own language. The pastry brush has been the "butter broom" since our 10 year old son asked in which drawer it belonged -- 20+ years ago. The Bucket of Doom has been in our vocabulary since we moved aboard. Last year, our newbie live aboard friends had heard us talking about fueling and called later with the now famous question: "What is a Bucket of Doom, do we need one and where do we find it? I couldn't find one at the marine store!"

Back to fueling. So, in normal winter conditions twice a week someone (yeah, yeah 99% of the time, EW) fills the jugs and carts them down to the boat. He sets up the funnel and the pumps and has breakfast, then returns to hand pump and then pour the last of the fuel into the funnel. That's it. We figure our heating carbon footprint is less than half it was in our 1200 square foot, fully-insulated-with-new windows home.

More on the furnace later this week. 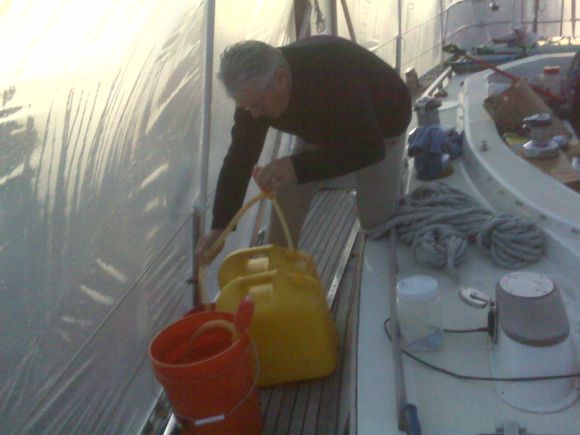 Bucket of Doom. Bags from Hell. I'm learning so much from you, Ms. Live-Aboard. I also admire your honesty. While EW may fill the funnels 99% of the time, Friday night pizza and a movie is all you, baby. Nice post and great pic.