Gray day on the water..jpg 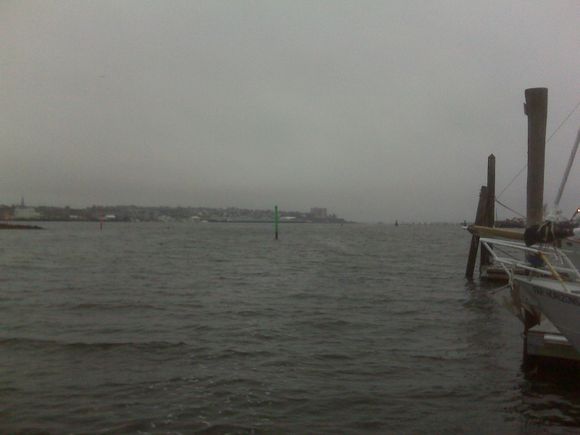 Posted at 08:59 AM in Living Aboard, Wintering Aboard in Maine | Permalink | Comments (0)

La Luna is wrapped and the wrap is shrunk. Warmer drier boat. FTW!
Sent via BlackBerry by AT&T 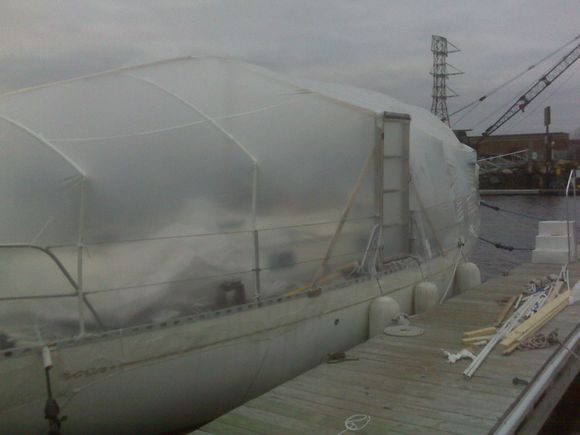 Under the cover - before we shrink..jpg 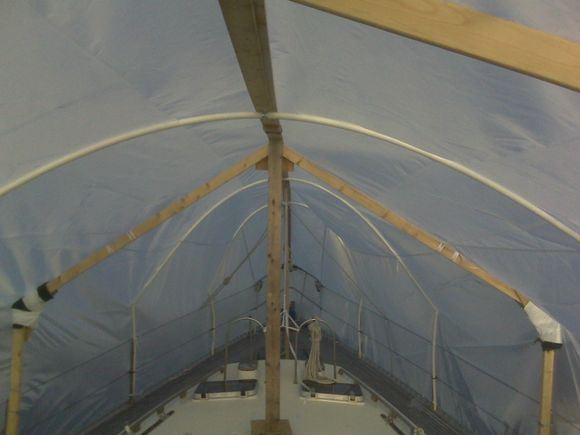 Thanksgiving At the Dock and Why I Made Two Pecan Pies

When people hear we live aboard their responses are largely predictable. This time of year, they ask where we have Thanksgiving.

I love Thanksgiving! Prior to moving aboard we always hosted the holiday for any family members who could join us -- and any friends or acquaintances who had no place else to go. One rule from those days -- everyone got their favorite pie on Thanksgiving. One year we had 12 people and 15 pies! I'm not sure who was in charge of counting, but some people obviously had two "favorites".

On board, we have an excellent galley with a refrigerator, freezer, three burner stove and oven. I have more counter space here than I've had in some apartments and rental houses, but the oven is a bit small. How small? To use the round pizza pan I had to bend up one edge with pliers so the oven door will close.

We did have our first Thanksgiving on board with EW's sister and friends who were in transition as their sons left the nest. As a newbie I was still trying to duplicate our life on shore and did not significantly or meaningfully reduce the menu to fit the circumstances. One change: our friends had a turkey fryer and the guys were stationed in the parking lot and put in charge of the turkey. We had made most of our favorite dishes prior to Turkey Day and just had to juggle heating everything on three burners or in a small oven. It was a delicious meal, but not really worth the effort on board.

Since then, we have had Thanksgiving off the boat, but I still make pies. When we first moved aboard, using the oven required excellent reflexes and balletic skills or a helper. Sailboat stoves are gimbaled - that means they are hung so that they swing and remain level when the boat is heeled. Consequently, when one opens the oven, the whole unit tilts down from the weight of the door and anything inside slides toward disaster.

Understand that when we moved aboard I was in "Adapt" mode. Totally involved in cheerfully learning to adapt to this new lifestyle. If the stove gimbaled, then I had to learn how to deal with it and I dealt with it for 3 years. So there we were on this fateful Thanksgiving eve. We were going to dine with EW's family at his sister's home elsewhere in Maine.   I was making pies and (typical me) doing 3 other things at once. EW was not at hand and I blithely opened the oven door as if I still lived on land and watched a perfect apple pie and a perfect Texas Bourbon Pehh-CAN Pie slide out and onto the sole of the galley (floor of the kitchen to you land lubbahs)! Arrrrrghhhhhh!

Here's what you may not know about boats -- their soles (floors) are not solid surfaces but individual pieces with access to the bildge. When you spill something it oozes between the planks and creates a much worse and more widespread mess than it would on land. So, first I cleaned the surface, then the cracks and crevices and bildge, then I went to Whole Foods for supplies and a store bought apple pie. Then on Thansgiving morning I rose early and made another pecan pie. (EW's favorite.)

Everyone has a Thanksgiving disaster or near disaster story and we have some from "Before". I mostly took this event in stride and turned it into a story with sound effects. (SPLAT!) Of course I was the goat for letting the pies fall but I was also the hero for taking such living-aboard challenges in stride.

Until I told that story to another live-aboard -- who said, "Don't you have a lock on the stove?"

"To keep it from swinging when you are at the dock."

"They have locks for that?"  And she invited me aboard to examine her stove.

Then I accosted EW. "Did you know that Janet's stove locks  so it doesn't gimbal?"

And he blithely said, "Sure. Most boats do. I've been meaning to get to that."

He got to it. It was either that or never have a Texas Bourbon Pehh-CAN Pie again.

View from the parking lot: If your car doesn't look like this you aren't living aboard. 11-20-09
Sent via BlackBerry by AT&T 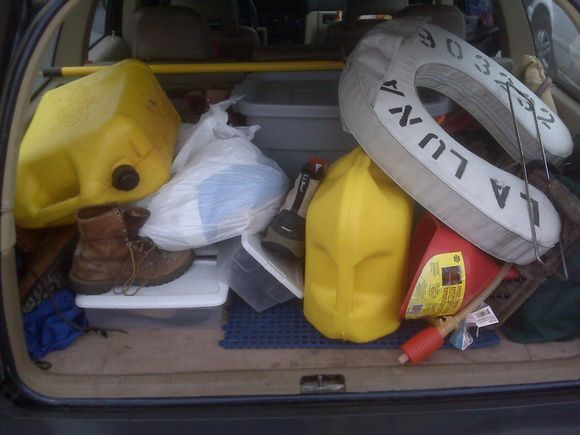 View from the dock: A perfect day to shrink wrap and a boat that needs it.
Sent via BlackBerry by AT&T 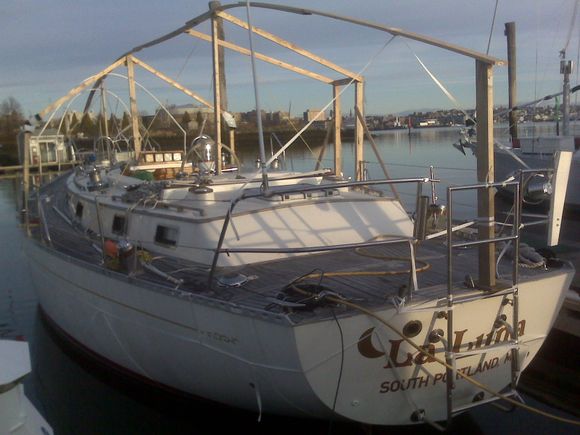 One of the things I learned after moving aboard was how much EW loves it when I cook. I'm not sure how I missed that message during the first 16 years of our married life, but I've got it now. 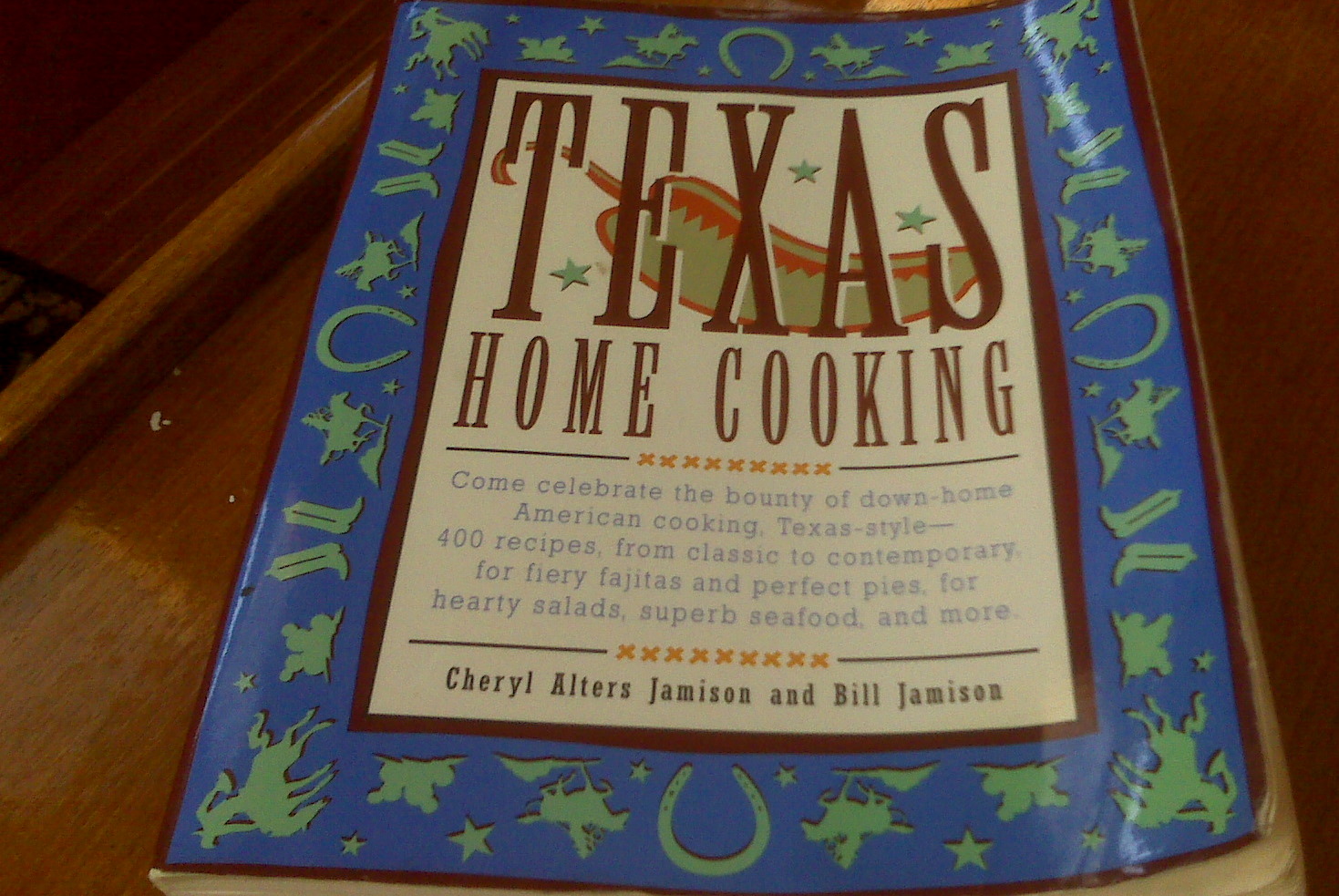 We started buying a cookbook when we traveled to someplace interesting, (a practice that will get too unwieldy on the world cruise). One of our favorites is Texas Home Cooking by Cheryl Alters Jamison and Bill Jamison. One of EW's favorite recipes from the book is "Perfect Pecan Pie" a recipe the authors say was influenced by John Thorne.

I make it every year for Thanksgiving. (One year I made two so we would have one to eat. That story can be found here.)

Here is the recipe:

2/3 cup Cane Syrup (or 1/3 Cup light corn syrup and 1/3 cup Unsulphured Dark Molasses)  I Find  Cane Syrup in specialty or gourmet stores or on the web.

Preheat Oven to 350 degrees. In a large, heavy saucepan, melt the brown sugar, syrup, and butter together with the bourbon, vanilla and salt. Continue heating the mixture to the boiling point, stirring frequently. Boil for 1 minute, stirring constantly. Remove the pan from the heat and let the mixture cool.

In a bowl, beat the eggs with the half-and-half until they are light and frothy. (I am so not a chef and don't know why the recipe was vague on amount of half-and-half. I use 3 tablespoons.) Add the mixture to the cooled syrup, beating until the mixture is well incorporated. Stir in the pecan pieces. Pour the filling into the pie shell. Top with a layer of pecan halves. (I make a nice spiral design, totally covering the pie filling with pecan halves. It is one of the few times I focus on "presentation" when cooking. I am so not a chef!)

Bake the pie 45 to 50 minutes or until a toothpick inserted into the center comes out clean.

Serve the pie warm or at room temperature. The Texas book says that if you store unshelled nuts in a cool, dry place they will keep for a year. Once I thought we would have fun if I purchased pecans in the shells and we shelled them ourselves. EW and Favorite did not have fun. I was forbidden to do that ever again. So much for authenticity.

When I make this year's pie, I will post photos here. Really.

Boat Yards and Boaters: When a Symbiotic Relationship Gets Adversarial

Unless you live alone on an island or mountain top, there are pretty much always symbiotic relationships that swing into the adversarial mode every now and then.

In other words, there are few things boaters love to complain about more than the boatyard. Whether it is the work, the amount being charged for the work, the state of the docks, parking, or the cleanliness of the bathrooms -- scratch a boater and you will get a complaint.

Such was the case with our electric bill. At our marina, the summer docking fees (April 15 - October 15) include the cost for electricity at the dock. If you stay all winter, they meter your post and bill you each month for electricity. That makes sense as some (really not wise) have electric heaters as their primary source of comfort over the winter. We have a furnace.

Effective customer service might indicate that we get a phone call -- "Hey, Barb, your electric bill is a lot higher than normal. We should talk about it."  That didn't happen. I had to go in to the office and say, "I was surprised by our electric bill." The response, "Yeah, it surprised me too," did not please me. "And you didn't question it? We weren't here for two of those weeks!"

They are looking into it. Would have been nice if they had done it without my mini rant.

Frost and Thaw on the Dock.jpg

I love how the sun selectively thaws the dock. Note the frost line created by the shadow of the utility cable. 11-19-09
Sent via BlackBerry by AT&T 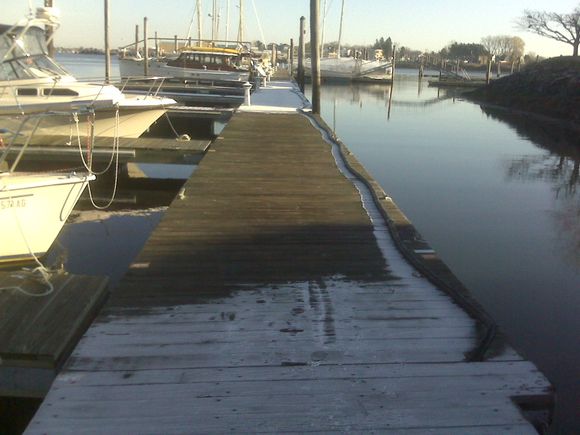 Posted at 11:17 AM in Living Aboard, Wintering Aboard in Maine | Permalink | Comments (0)

EW Working on the Frame.jpg

View from the deck: EW is getting an early start this morning -- before he shows a boat. He also scraped my car windows. 11-18-09
Sent via BlackBerry by AT&T 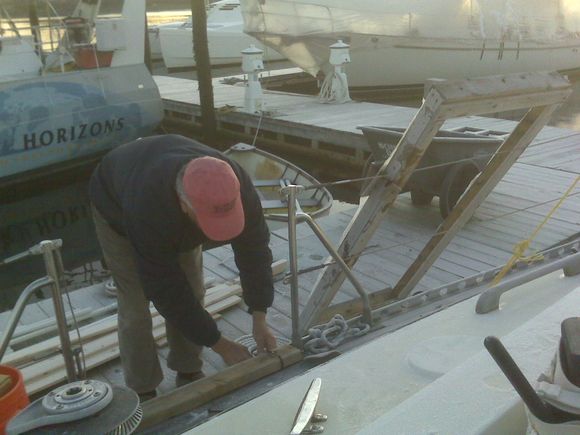 Posted at 07:56 AM in Living Aboard, Wintering Aboard in Maine | Permalink | Comments (0)