Flying the Flag on the Cheoy Lee (Or, Aye, Aye, Captain!) 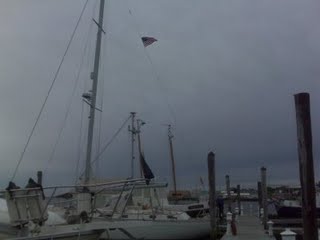 Stew (AKA EW) earned his Captain's license a year or so ago, so it is official. He has been my captain since we started boating together. I certainly make my wants known and have had good ideas -- but he is in charge on the boat.

When we purchased La Luna, the former owner had a flag pole on the most after part of the deck. That eventually interfered with the dinghy motor and then with the grill. (Can't have a fluttering flag next to a gas grill, you know.) So, last year EW installed a special flag halyard on the back stay and we flew Old Glory from about 10 feet off the deck. I'm not sure whether someone commented on it or whether he recalled something about flag etiquette, but out came Chapman's (the boaters "bible") and it was decreed that the flag had to be raised on the back stay. A lot.

We also needed a bigger flag. The length of the flag should roughly correspond to the length of your boat. So, our 47 foot Cheoy Lee required a 48 inch flag, and that flag had to fly 1/3 of the way down the back stay from the top of the mast. I'm not sure how long the back stay is but the mast is 66 feet off the waterline or about 60 feet off the deck. Someone had to go up in the Top Climber and install a flag clip and block. We attempted it a week ago and found that Stew could not get close enough to the back stay to work on it. That climbing experience became a practice session  and I climbed about 15 feet off the deck to try it out.

Saturday morning was deemed wind appropriate, Stew rigged a line to the back stay that would allow him to climb (with two adjustments to get around back stay stuff)and then pull himself in, tied to the back stay so he could install the hardware. It went quite smoothly. I insisted that he take a small coiled line so that if he needed an extra tool I could send it up. Yea me! He dropped the flag halyard. Others on the dock were trying to figure out how to get it to him, when he calmly dropped one end of the extra line down to the deck and I tied the halyard to it for easy hoisting. For the win!

Frankly, I don't like to see him up the mast - and was not thrilled with his insistence that we get her done. But now, my heart soars when I walk down the dock and see La Luna proudly and correctly flying her colors.