Home Archives Profile Subscribe
Living Aboard a Sailboat - (or Don't You Get Sick of Each Other?)
Our Community of Folks Living Aboard In Maine

Living Aboard a Sailboat With A Dog (Jake's Story) 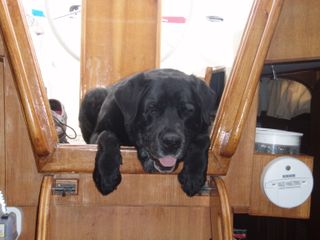 Jake, our black lab was 6 when we moved     aboard -- not exactly an old dog but     certainly one who enjoyed a routine.     Moving was traumatic for him as he had     been semi-abandoned (he was a dog of     divorce) and as soon as the packing process     began he became as needy as a teething 9     month old baby.

We moved out of our house and into a     furnished rental while we got the boat ready     for launching. Jake did enjoy the gas fireplace -- but hated everything else about those 8 weeks. Each weekend, we would tie him to the jack stands and climb the ladder to the boat, leaving him below with water and a chew bone. As the snow melted and other boaters started arriving, Jake received a lot of attention and loving and treats from our neighbors - but he never really settled.

The boat was launched and almost immediately we began to move our things aboard. His reaction was amazing. He trotted down the dock, greeting the neighbors he had met, bounded up on the boat and easily jumped down the companionway to the main saloon. I'm sure he could smell familiar odors -- and we had already installed his bed in the forward cabin. He inspected the cabins and galley, moved forward to his bed and laid down with a big sigh. He was home. He's been an outstanding boat dog ever since. Now, five years later he needs help up the companionway -- and we are glad to give it. Jake and we are home.

Note that we also forgive a "little shedding". The "Black Vac" removes all food particles, but doesn't touch dog hair. 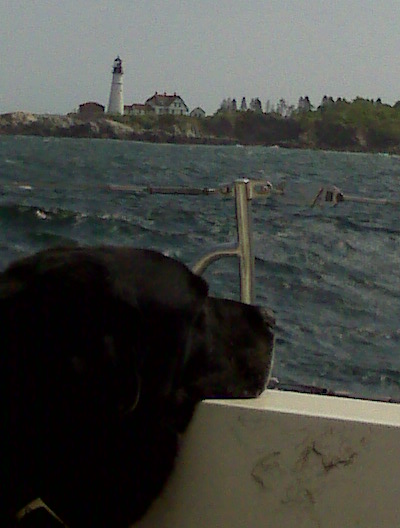 Posted at 04:20 PM in Living Aboard, Wintering Aboard in Maine | Permalink | Comments (0)